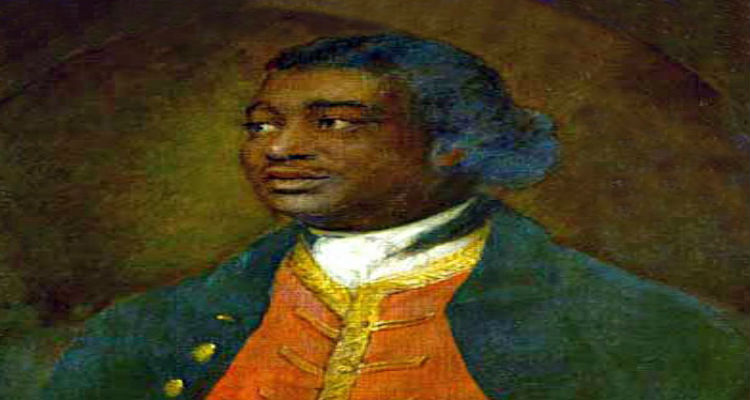 Ignatius Sancho (c. 1729 – 14 December 1780)  is the first known Black Briton to vote in a British election. He gained fame in his lifetime and after his death when his letters, The Letters of the Late Ignatius Sancho, an African, were edited and published providing one of the earliest accounts of the Maafa written in English by an African.

Sancho was born aboard a slave ship in 1729 and was orphaned soon after. His mother died in the Spanish colony of New Granada and his father committed suicide rather than live in slavery . He was baptised, Ignatius and brought to England at the age of two. He was “given” to three maiden sisters in Greenwich. The three women added “Sancho” to his name, after the Don Quixote’s companion. His life with them was unhappy as they often psychologically abused him by threatening to return him to plantation slavery.

Fortunately, as a child he met the Duke of Montagu who was a neighbour to the sisters. The Duke, quite impressed by Sancho’s  intellect, frankness and lively spirit, would often take him home and not only encouraged him to read but also lent him books from his personal library. The Duke strongly recommended that his three enslavetresses cultivated his genius but unsurprisingly they refused. When life in Greenwich became unbearable, Sancho run away seeking help from the now-widowed Duchess of Montagu. She at first turned him away but on learning that he intended to shoot himself rather than return to his previous enslavetresses, she took him into her household as a butler until her death. The Duchess provided for Sancho by leaving him seventy pounds, and an annuity of thirty.

Sancho at first squandered his money on gambling and women. He even attempted acting, playing Othello and Oroonoko, two staple Black characters of the eighteenth century stage, but a speech impairment aborted his success there. When he lost his clothes at gambling he reformed his life and married a West Indian woman named Anne Osborne and became a devoted husband and father to his six children: Frances Joanna (1761–1815), Ann Alice (1763–1805), Elizabeth Bruce (1766–1837), Jonathan William (1768–1770), Lydia (1771–1776), Katherine Margaret (1773–1779) and William Leach Osborne (1775–1810).

Anne and Ignatius were married on 17 December 1758 in St. Margaret’s Church, Westminster. Sancho affectionately referred to his family as the ‘Sanchonets and Sanchonettas’. Sancho loved his wife unabashedly and nearly always appended his wife’s greetings to his letters. To one friend he wrote on 15 September 1770 that he hoped ‘Mrs. Sancho will be as good as her word, and soon pay you a visit. I will trust her with you though she is the treasure of my soul’. In another,  written on 11 October 1772 , he shared that he was ‘heartily tired of the country. The truth is Mrs Sancho and the girls are in town. I am not ashamed to own that I love my wife – I hope to see you married and as foolish.’

It was in 1768, that Sancho’s portrait was painted by Thomas Gainsborough at the same time as the Duchess of Montagu sat for her portrait.

Around the time of the birth of their third child, Sancho became a valet to the George Montagu, 1st Duke of Montagu, son-in-law of his earlier patron.  He remained there until 1773.

On 29th January 1774,  Anne and Ignatius Sancho opened a grocer’s shop offering merchandise such as tobacco, sugar and tea at 19 Charles Street in London’s Mayfair, Westminster. As shopkeeper Sancho enjoyed more time to socialize, correspond with his many friends, share his enjoyment of literature and attracted many people to his shop. When it was quiet Sancho sat at the back and wrote his famous letters. His wife was also literate and they would read and discussed his correspondences together. Sancho wrote and published a Theory of Music and two plays.

Sancho was also the model for the character Shirna Cambo in the 1790 novel Memoirs and Opinions of Mr. Blenfield, in which he serves as a wise man and adviser to a young man who, like Smith was taken to visit him. During their friendship Cambo instucts Blemfield on filial duty, religion, literature, slavery and philanthropy. This novel is perhaps the first instance in English literature when whyte men visit a Black family in their home as equals and when Black people are shown as integrated into the whyte English community.

Sancho was indeed a wise man, but he was also very self-deprecating. He referred to himself as a ‘poor Negro’, a ‘blackamoor’, ‘a poor African’, ‘a fat old fellow’ and ‘Sancho the Big’. He signed his letter to the newspapers as ‘Africanus’. However his self-mockery was underpinned by deadly seriousness against the Maafa. Well aware that he was fortunate to have escaped West Indian slavery, he spoke against whyte supremacy system of slavery as a ‘subject which sours my blood’. He read the latest books and pamphlets against the Maafa, some sent to him by friends. He thanked a friend in a letter stating, ‘for your kindness in sending the books, that upon the unchristian and most diabolical usage of my brother Negroes, the illegality…the horrid wickedness of the traffic…the cruel carnage and depopulation of the human species… The perusal affected me more than I can express…’

Sancho’s life in England was punctuated with visits to the theatre, fishing in Scotland, celebrating his children’s birthdays. He enjoyed reading good books (and greatly admired the work of Phyllis Wheatley), his wife’s solicitude and intelligence, and smoking a pipe. He had a brand of tobacco named after him, ‘Sancho’s best Trinidado’. He wrote letters nearly to the end of his life, recording his decline through fever, asthma, dropsy and gout, many of his symptoms probably brought on by obesity.

When he died on the 14 December 1780 at the age of fifty-one and was buried in Broadway, Westminster, he became the first African to be given an obituary in the British press. His letters were collected and published by one of his correspondents, Miss F. Crewe in 1782 and sold so fast that the Monthly Review had to wait for the second printing the following year to review it. there were over 600 subscribers to the book including nobility, and Anne Sancho who kept on their grocer’s shop, receive £500 for its publication.

Their son William published the fifth edition of Sancho’s Letters in 1803. He transformed the family shop in Westminster into a printing and publishing venture.

Sancho features on the list of 100 Great Black Britons.

A plaque to the memory of Sancho was unveiled on 15 June 2007, on the remaining wall of Montague House on the south-west boundary of Greenwich Park.  A second plaque to his memory is on the Foreign and Commonwealth Office.

THANK YOU FOR THE INFORMATION LOVE KNOWING MY PEOPLES HISTORY……