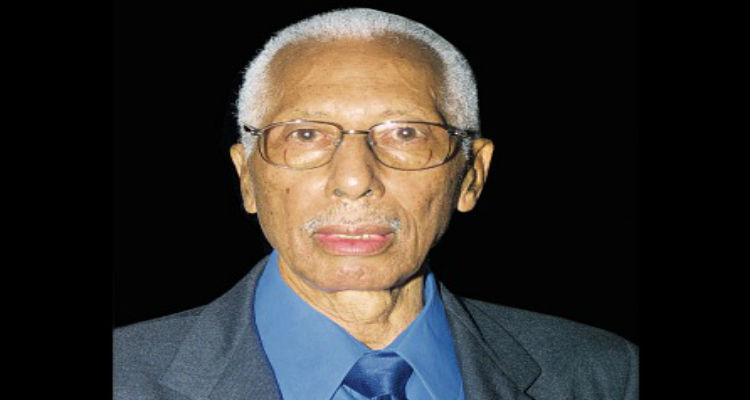 Herbert Henry “Herb” McKenley OM was a Jamaican sprint runner and the only athlete to reach an Olympic track final in all three of the classic sprint events; 100, 200, and 400 metres. He competed at the 1948 and 1952 Olympics in six events in total and won one gold and three silver medals. McKenley was the world’s fastest 400-meter runner more than half a century ago and later the driving force in Jamaica’s climb to track and field glory. 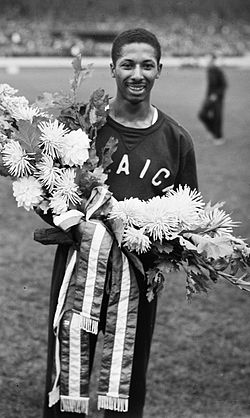 Herbert Henry McKenley was born July 10, 1922, in Clarendon, Jamaica. His father was a doctor and wanted his son to become one, too. His mother wanted him to be a violinist. Starting him with lessons at age 12, she sent him to a teacher two and a half miles away. Rather than wait for a bus, Herbert got there faster by running.

McKenley attended Calabar High School and participated in the Boy’s High School Track and Field championship where he was known as “Coco’s Mango”. He was given this name because Leroy “Coco” Brown of Wolmer’s High School constantly defeated McKenley in the championships. However, Herb was soon to take his revenge in the first-ever international meet in Jamaica in July 1941. He raced Brown over the 100m and 200m six times and won five of the six events. He also beat his schoolboy idol, Arthur Wint, in the 200m. In 1942 he enrolled in Boston College as the first Jamaican to be awarded an athletics scholarship to attend an American University. In 1945 he transferred to the University of Illinois where Coach Leo Thomas Johnson was instrumental in his development as an athlete. McKenley won the NCAA championships in 220 yd (200 m) and 440 yds (400 m) in 1946 and 1947. He was also the AAU champion in the 440-yard dash in 1945, 1947 and 1948, and was also the head of the list of world best times in 100 m (10.3), 200 m (20.4), and 400 m (46.2) in 1947.

He is the only person to ever have achieved this feat.

Just before the 1948 London Olympics, McKenley ran the new world record in 440 yd (400 m) of 46.0, a record he broke again a month later, clocking 45.9. But at the Olympics itself, McKenley finished only second in 400 m, behind teammate Arthur Wint and was fourth in 200 m. He probably lost a gold medal in the 4×400m relay when Wint pulled his muscle in the final. He is the only person to have made the final in all three sprinting events in the Olympics.

In 1950 McKenley submitted to the Jamaica Amateur Athletics Association (JAAA), an eight-point program to develop track and field in Jamaica. This program led to the development of athletics clubs across the island and also included advice to the Jamaica Amateur Athletics Association (JAAA) to establish branch offices to reduce strain on the central office and also to increase accessibility to the services they provide.

In 1951 McKenley was Jamaica’s only representative to the Pan- American games where he won bronze medals in the 100m, 200m, and the 400m. In the 1952 Olympic Games in Helsinki, Finland, Herb placed second in the 100m and the 400m and gold in the all time best mile relay. This was also a world record performance for Mckenley as he was recorded as running 44.6 seconds for his leg of the relay, a world record performance of 3.03s.

At the Helsinki Olympics in 1952, McKenley was second in 100 m (the first four clocked 10.4 in a very close race) and also second in 400 m. He finally got his Olympic gold, when he helped the Jamaican 4×400 m relay team to win the race with a new world record of 3.03.9. His remarkable 44.6 legs a credited with pulling Jamaica into contention. It is considered one of the greatest relay legs in history.

Henry Herbert McKenley was appointed Supervisor of Athletics in Jamaica effective August 1, 1954, and coached the Jamaican National Team from 1954 to 1973. He also coached the West Indies Federation team in Rome in 1960. McKenley was both Manager and Coach of the Rest of the World team versus the Soviet Union in 1971.

At the Helsinki Olympics, McKenley was second in 100 m (the first four clocked 10.4 in a very close race) and also second in 400 m. He finally got his Olympic gold, when he helped the Jamaican 4×400 m relay team to win the race with a new world record of 3.03.9. His remarkable 44.6 leg is credited with pulling Jamaica into contention. It is considered one of the greatest relay legs in history.

After Helsinki, he returned to Jamaica, coached the national team from 1954 to 1973, and later served as president of Jamaica’s Amateur Athletic Association. He led a youth program that produced international stars like Don Quarrie, Lennox Miller, and Merlene Ottey. Soon, 60 to 100 Jamaicans were receiving track and field scholarships to American colleges every year. Herbert McKenley also gave back to where it all began; he coached the Calabar High School Boys High track and field team to 17 of 18 victories.

McKenley died at the University Hospital of the West Indies, according to Howard Aris, president of the Jamaica Amateur Athletics Association, who was speaking for the family. The cause of death was complications of pneumonia.