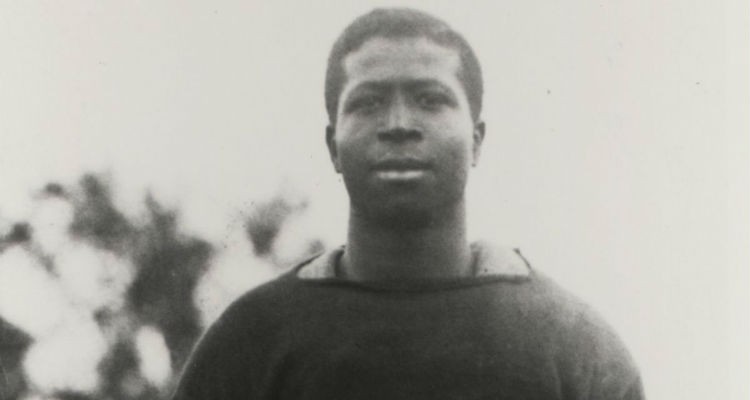 Gideon Edward Smith sometimes referred to as G. E. Smith, was an American football player and coach. Smith was the first African-American varsity athlete in any sport at at Michigan Agricultural College (MAC), now known as Michigan State University, and is listed among the first Black players in professional football as well. Smith was inducted into the Hampton Athletics Hall of Fame in 2009.

“I remember my grandfather as the most gentle person I’ve encountered in my life. I honestly never saw him angry, never saw him express any kind of irritation or impatience. That is something I truly continue to reflect upon,  as I grew into adulthood because I still find it almost unfathomable knowing his story and knowing his journey. I’m trying to still wrap my head and my heart around how he could emerge from the types of challenges he faced, from all of his myriad encounters with racism, from the injustices that he encountered from all of the indignities, large and small, with that gentle nature intact, and the sense of humanity he had, the willingness to help, and the kind of differences he made in other’s lives. That remains a huge question for me, and an inspiration.” –John Milton Belcher III

Gideon Smith was born in Northwest Norfolk County, Va., on July 13, 1889, just 24 years after the abolition of the Maafa (Atlantic slavery). In 1913, Smith arrived on the campus of Michigan Agriculture College (MAC), now known as Michigan State University, to play football for the Aggies. Smith was the first African-American to participate in athletics at the university. Although Smith was the first Black tackle MAC ever yielded, he was also widely regarded as the third African-American to play college football.

Smith manufactured a great career playing for the Aggies. Throughout his stay at MAC, he compiled a 17-3 record and his offense outscored opponents 636-123 in those games. Smith’s biggest challenge came on Oct. 11, 1913, when his team faced off against Michigan. The Wolverines simply dominated the Aggies in their first seven match-ups producing such scores as 39-0, 119-0, 46-0 and 55-7. To everyone’s surprise, MAC took a quick 12-0 lead, and with the help of Smith, held on for the win by a final score of 12-7. The Detroit Free Press called the contest “among the biggest upsets in college football history.”

Individually, Smith’s collegiate shining moment came against Akron on Oct. 31, 1914. After recovering a fumble on the Aggie goal-line, Smith scooped up the ball and took off down the middle of the field. It appeared as if he was going to take it all the way until he was pulled down a few yards shy of the end zone. Smith’s fumble scamper of 95 yards registers longer than any other player in program history. A portion of the headline in the Saginaw Courier-Herald the next day read “Negro Lineman Furnishes Thrill with Sprint for 95-Yard Gain.” Later in the same game, Smith ripped off a 60-yard sprint for the score adding to the 75-6 final outcome.

After graduating college in the spring of 1916, Smith went on to a brief but successful pro career. The Canton Bulldogs contracted Smith for one year. Canton went on to win the League Championship that year with the help of a great play by Smith. In the teams’ final game against bitter rival Massillon, Smith recorded a crucial fumble recovery to help preserve the Championship and the 6-0 victory of the Tigers. Smith was the last African-American to play professional football exclusively prior to the formation of the National Football League.

After enlisting in the United States Military and serving time in World War I, Smith returned to his home state of Virginia where he began teaching Physical Education at Hampton Institute (now known as Hampton University). That same year, in 1921, he became the head football coach and remained in that position for the next 20 years. Smith had an impressive record of 102-44-12 record, including six one-loss seasons and two undefeated seasons in 1926 and 1931. His 1931 team outscored opponents 187 to 6.

After coaching, Smith stayed on at Hampton as assistant athletics director until his retirement in 1955. Thirteen years later, Smith passed away after a long battle with illness at the age of 78.