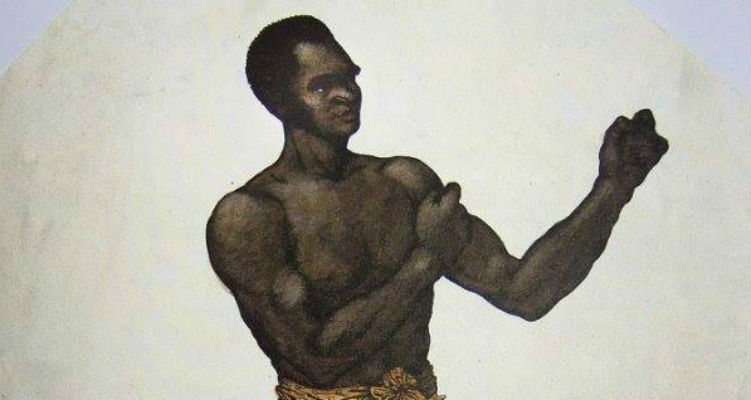 Bill Richmond was an African-American boxer, who was the first Black professional boxer to gain international recognition. Richmond was the Muhammad Ali of his day – quick-witted and fast to react to racism.

Richmond was born enslaved on August 5, 1763, in Cuckold’s Town (now Richmondtown), on Staten Island, New York. While in his early teens, Richmond came to the attention of British general Earl Percy, who was then the commanding general of British forces in New York during America’s War of Independence. Percy took Richmond in after noticing his fighting prowess during a bar room brawl. Richmond’s success as a fighter continued in contests, arranged by Percy as entertainment for his guests, against New York-based British soldiers. When Percy returned to England he took young Richmond with and sent him to school in Yorkshire. He also served as an apprentice to a cabinet maker and took up boxing for self-defense.

Once when escorting a young lady through the streets of London some ruffian made comments about his color and Richmond demolished him with punches that were thrown at an amazing speed. His talent in boxing was stimulated by the feeling of injustice and the use of his fists became most frequent. His talent for bare-knuckle fighting was perfected on soldiers who had been racially abusive to him.

By 1800, Richmond had become a recognized semi-professional boxer. 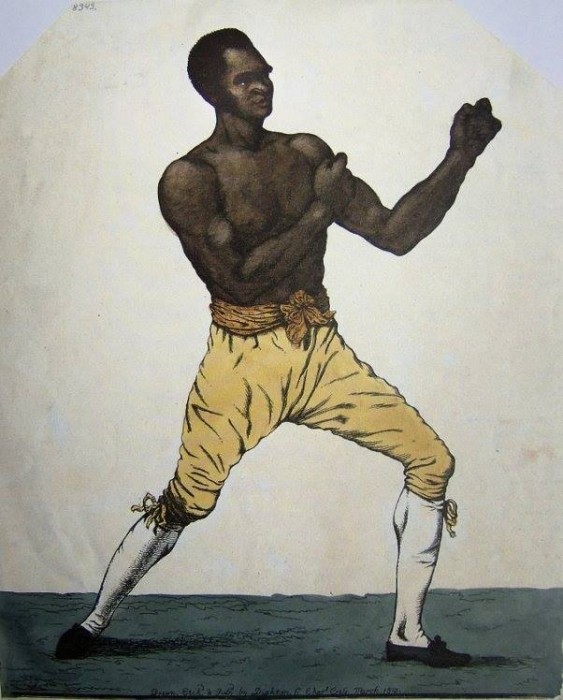 Richmond had his first professional fight in January of 1804 when he was 36 years old. He witnessed veteran boxer George Maddox in action and declared he could defeat him. Given the opportunity, he failed miserably. Maddox stopped him in three rounds. Undeterred, Richmond entered the ring in May of 1805 and defeated a Jewish boxer known as “Fighting Youssep.” This contest gave him a reputation as a pugilist, and he was soon matched with boxer Jack Holmes, who was credited with giving Tom Cribb, one of the leading pugilists in England, one of his toughest fights. The win over Holmes after 26 grueling rounds set the stage for a match with Cribb in October 1805, to become the “Champion of England”.<.p>

Known as “Black Terror,” Richmond received no boxing tutoring and was entirely self-taught. In those days there were no weight divisions, and by today’s standards, Richmond, who weighed between 140 and 147 pounds (64 and 67 kg), would have been a welterweight, and yet he often fought men who weighed 4 to 5 stone (25 to 32 kg) heavier than himself. He had excellent footwork and quick hands, which enabled him to avoid the big punches and outwork bigger fighters (the bob and weave technique). 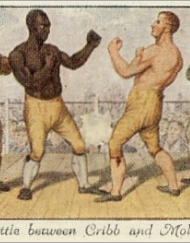 Now 42 years of age, Richmond’s superior boxing technique was demonstrated in his fight with Tom Cribb, who was unable to land a punch in the early rounds. Cribb was considered unbeatable, was much the taller man and stones heavier than Richmond – his fighting talent was known all over the country. The fight itself lasted 90 minutes. Richmond gave a brilliant and brave performance but his 24-year-old foe’s weight and durability tired him and he was eventually beaten by the bigger and stronger fighter, in the 25th round! It was Richmond’s second and last defeat.

Although defeated, Richmond became a national hero after his performance and his skills were well sought after.

In 1808 Richmond faced and defeated Jack Carter at Epsom Downs near London. In 1809 he had a rematch with George Maddox at Wimbledon Common and won after 52 rounds.

Richmond married after this fight and with his winnings bought the Horse and Dolphin pub in Leicester Square, London, and built his first boxing academy on the very ground where Nelson’s column now stands. His students included Members of Parliament and the nobility. On occasion, Richmond fought in exhibition boxing matches. Richmond who was also an excellent cricketer and conversationalist, then mixed with the best in the land. He was eventually decorated by King George IV for his great service and contribution – bringing to Britain a sweet science – the noble art of self-defence – boxing.

Richmond also trained in his own style an ex-enslaved man called Thomas Molineaux, who came to England to pursue boxing. Richmond trained Molineaux for his memorable bouts with Cribb. Molineaux fought Cribb twice (unsuccessfully) for the title – Champion of England. Molineaux had amazing talent like Richmond and was a true heavyweight. He could have beaten and nearly did stop Cribb but crowd interference saved Cribb and he recovered to fight back to win.

Bill Richmond died at his home in London in 1829. He was inducted into the International Boxing Hall of Fame in 1999.

Ten Jamaican proverbs you should know

I have written a lot about Bill Richmond, including a whole, as yet, unpublished novel. You may like this piece. http://idiscoveredamerica.com/?p=292.