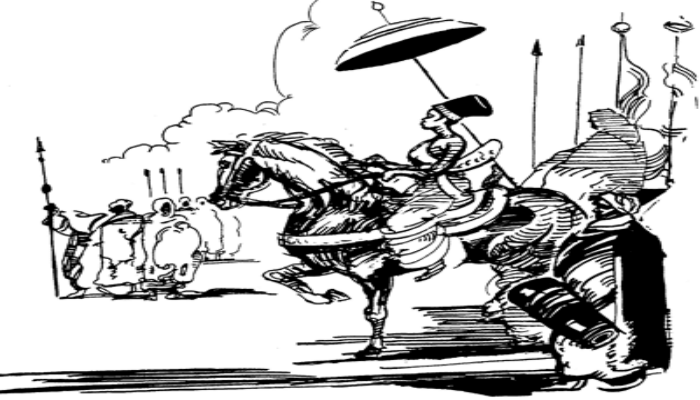 Dahia Al-Kahina was “the queen of the Berbers” who led the most determined resistance to the early Arab invasion of North Africa. Arab records describe her as having “dark skin, a mass of hair and huge eyes.”

A legendary figure, she is also supposed to have had the gift of prophecy. She had three sons, which is characteristic of witches in legends. Even the fact that two were her own and one was adopted (an Arab officer she had captured), was an alleged trait of sorcerers in tales. Another legend claims that in her youth, she had supposedly freed her people from a tyrant by agreeing to marry him and then murdering him on their wedding night.

In 639 AD when the Arabs invaded Africa, ending 600 years of Roman occupation, spreading the new religion of Islam from Egypt to Morocco and also into Spain, African people were destroyed or enslaved. Kuseila of Mauritania resisted but he was defeated and killed in 688 AD. His position as leader of the African resisitance was taken over by his relative, Kahina. Under her leadership the Africans fought back fiercely and drove the Arab army northward into Tripolitania. These fierce counter-attacks made some of the Arab generals doubtful that Africa could be conquered. When the Arab general, Hasan ben Numan captured Carthage in 698, his victory proved to be short-lived. Queen Kahina soon rallied her forces and drove him from the city. She defeated Hasan so soundly that he fled and holed up in Cyrenaica (Libya) for four or five years. Realizing that the enemy was too powerful and bound to return, she was said to have embarked on a scorched earth campaign.  She ordered that the fertile districts be laid waste so that the lack of food and shelter would discourage the Arabs from returning. The ruinous effect on the soil of southern Tunisia can be seen to this day. However, instead of discouraging the Arab armies, her desperate decision may have hastened defeat.

Kahina was finally defeated in 705. Hasan was aided by communications with the captured officer adopted by Kahina. Before the battle, foreseeing the outcome, she sent her two real sons over to the Arab army under the care of the adopted son, and Hasan is said to have given one of them charge of a section of his forces. According to some accounts, Kahina died fighting the invaders, sword in hand, a warrior’s death. Other accounts say she committed suicide by swallowing poison rather than be taken by the enemy.

After her death the Arabs began to change their strategy in advancing their faith and their power in Africa.

Source:
When We Ruled by Robin Walker
Black Women in Antiquity by Ivan Van Sertima