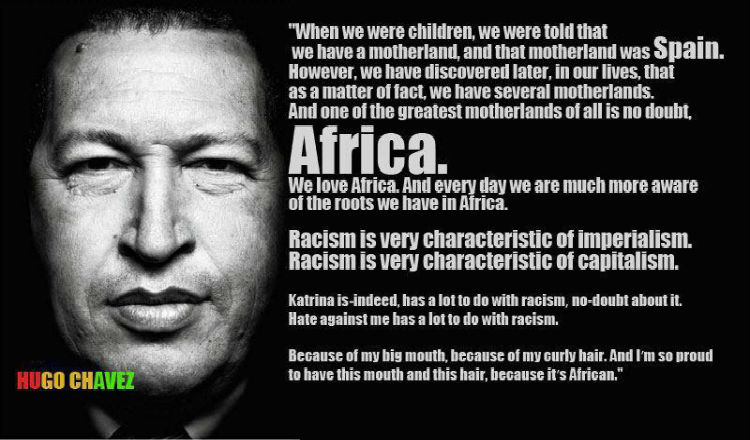 Chavez was the first Latin American president to proudly embrace indigenous and African ancestry; and under his 14-year leadership he initiated programmes and policies that challenged the historical legacy of racism and discrimination that plagued the country. He drastically reduced poverty and uplifted the Afro Venezuelan communities through his radical socio-economic programs. In 2005, Hugo Chávez led Venezuelan lawmakers to establish May as Afro-Descendent Month, and May 10 as Afro-Venezuelan Day (El Día de la AfroVenezolanidad). That day was chosen to honor Black revolutionary hero José Leonardo Chirino, who led an insurrection against Spanish colonists in 1795.

Furthering its commitment to ending racial disparities, the Chávez administration passed the Organic Law Against Racial Discrimination in 2011, which holds the power to establish “mechanisms to prevent, respond to, punish and eradicate racial discrimination by any person, group of persons, public authorities, and private institutions, and civil, economic, political, cultural, and social organizations.” And also in 2011, Venezuela changed its national census to allow its citizens to identify themselves as Black for the first time.

Here are ten quotes by Chavez:

1. “When we were children, we were told that we have a motherland, and that motherland was Spain. However, we have discovered later, in our lives, that as a matter of fact, we have several motherlands. And one of the greatest motherlands of all is no doubt, Africa. We love Africa. And every day we are much more aware of the roots we have in Africa…. Racism is very characteristic of imperialism. Racism is very characteristic of capitalism. Katrina is—indeed, has a lot to do with racism–no doubt about it. Hate against me has a lot to do with racism. Because of my big mouth, because of my curly hair. And I’m so proud to have this mouth and this hair, because it’s African.”

2. “Christopher Columbus was the spearhead of the biggest invasion and genocide ever seen in the history of humanity.”

4. “We must confront the privileged elite who have destroyed a large part of the world.”

5. “Mutual respect! That’s what it takes to be friends.”

6. “I hereby accuse the North American empire of being the biggest menace to our planet.”

8.”These are not easy days, but we are warriors against adversity. … I can’t continue being the same runaway horse.” (On fighting Cancer, 2012.)

9. “I have always said, have heard, that it would not be strange that there had been civilization on Mars, but perhaps capitalism arrived there, imperialism arrived, and finished that planet.” (On the influence of capitalism extending well beyond Earth, 2011.)

10. “I read that 3,000 soldiers are arriving, Marines armed as if they were going to war. There is not a shortage of guns there, my God. Doctors, medicine, fuel, field hospitals, that’s what the United States should send. They are occupying Haiti undercover. On top of that, you don’t see them in the streets. Are they picking up bodies? Are they looking for the injured? You don’t see them. I haven’t seen them. Where are they?” (“Chavez on U.S. foreign policy intentions after the 2010 earthquake in Haiti.)

I am a chavista.