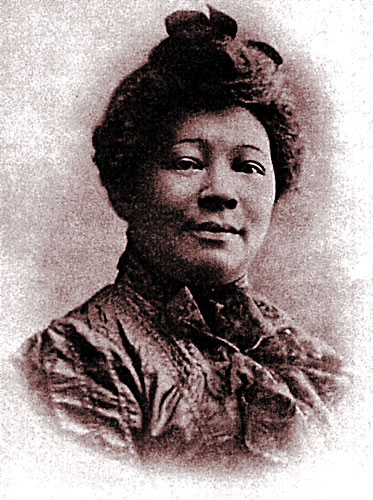 Yates was also significant in the African-American women’s club movement. She was a correspondent for the Woman’s Era (the first monthly magazine published by black women in the United States) and wrote for other magazines as well. Yates was also the first president of the Women’s League of Kansas City (1893) and the second president of the National Association of Colored Women (1900–04).

Yates birth is given variously as 1852, and as November 15, 1859. She was born in Mattituck, Suffolk County on Long Island, the second daughter of Alexander and Parthenia Reeve Silone. Her mother taught her to read and when she started school at the age of six, she was rapidly advanced by her teachers.

When she was eleven, she was sent to live with her maternal uncle in Philadelphia and studied at the Institute for Colored Youth for a year. There she was mentored by its director, Fanny Jackson Coppin. She progressed rapidly and was later sent to live with her maternal aunt, Francis I. Girard, in Newport, Rhode Island, to finish grade school and enrol in high school. She completed the four-year high school course in three years excelling in all of her courses. She was the only black student in her class and her class valedictorian, receiving a medal for scholarship.

After graduation she chose to prepare for a teaching career by taking the teaching course at Rhode Island State Normal School, where she again graduated with honors, the only black student in her class. She became the first African American certified to teach in the schools of Rhode Island. She later received a master’s degree from the National University of Illinois.

Josephine Silone Yates was clear about her purpose in teaching. In a 1904 essay, she wrote: “The aim of all true education is to give to body and soul all the beauty, strength, and perfection of which they are capable, to fit the individual for complete living.”

Yates continued her teaching career in Kansas City, and also became active in the African-American women’s club movement. She was a correspondent for the Woman’s Era (the first monthly magazine published by Black women in the United States), and also wrote for the Southern Workman, The Voice of the Negro, the Indianapolis Freeman, and the Kansas City Rising Son, under her own name and the pseudonym “R. K. Porter”. Racial uplift was one of many topics Yates spoke and wrote about. She was identified as an exemplar of her race and included as one of 100 of “America’s greatest Negroes” in Twentieth Century Negro Literature; or, A Cyclopedia of Thought on the Vital Topics Relating to the American Negro in 1902. Her paper addressed the question “Did the American Negro make, in the nineteenth century, achievements along the lines of wealth, morality, education, etc., commensurate with his opportunities? If so, what achievements did he make?” She also published poetry, including The Isles of Peace, The Zephyr, and Royal To-Day.

Yates helped to found the Women’s League of Kansas City, an organization for the self-help and social betterment for African-American women, and became its first president in 1893. In 1896 the Women’s League joined the National Association of Colored Women (NACW), a federation of similar clubs from around the country. Yates served with the NACW for four years as the treasurer or vice-president (1897 to 1901) and for four years as president (1901 to 1904).

In 1902, she was recalled by the president of Lincoln Institute to serve as the head of the department of English and history. In 1908 she requested to resign due to illness, but the Board of Regents did not accept, and she stayed on as the advisor to women at Lincoln. Her husband died in 1910, after which Yates chose to return to Kansas City.

She died suddenly on September 3, 1912, after a two-day illness.

Friendship has splendors that love knows not. It grows stronger when crossed, whereas obstacles kill love. Friendship resists time, which wearies and severs couples. It has heights unknown to love.

— Mariama Bâ, So Long a Letter