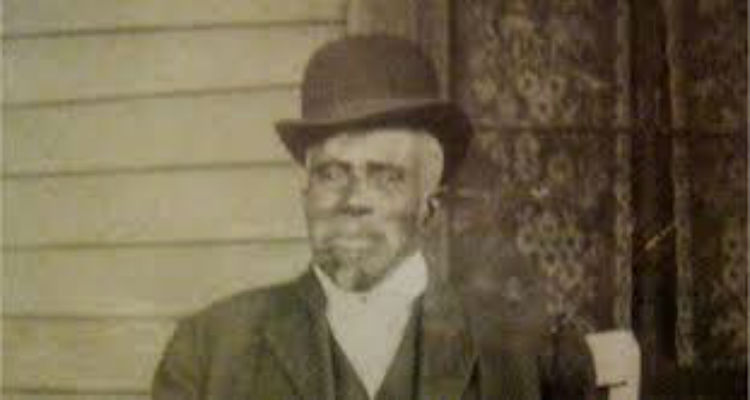 “Some people don’t want that part of history told because it makes them or their ancestors look bad, but history is history. You can’t just tell the part that makes people look good. If you’re going to tell it, tell it all and tell it accurately.” ~Constance Hollie-Jawaid

On July 29, 1910, a mob of an estimated 1,000 whytes attacked a town of unarmed Blacks in what has become known as the Slocum Massacre. Slocum was predominately Black at the time and was a very prosperous community. Essentially the massacre was a racial expulsion. A Texas politician Jerry Sadler says it was pure and simple just a land grab.”

That morning, hundreds of whyte people from the surrounding community converged on Slocum. Over the following days terror reigned for the African American citizens as individuals were gunned down working fields and seeking shelter in their homes. Even those who tried to leave town were not safe. Many bodies were found shot in the woods, with their travel packs at their sides. The number of victims in the massacre varies depending on the historical account. Newspaper articles from 1910 indicate numbers as few as eight to as many as 200. 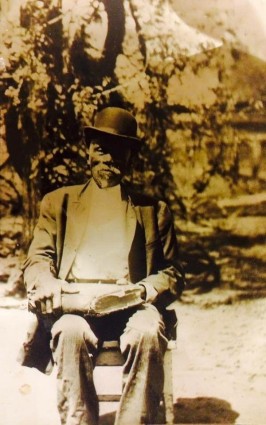 Jack Holley, survived the Slocum Massacre but some of his family members did not.

Slocum was one of many towns, such as Rosewood and Tulsa, where a successful, self-sufficient African American community was the subject of a terrorist attack designed to maintain economic whyte domination. In each town, the incident that sparked the attack was relatively insignificant and often fabricated. In Slocum, there were several events that may have sparked the unjustified massacre. After a Black man was lynched nearby, rumors spread among whytes that Blacks were planning revenge. Also, there was a disputed debt between a well-regarded Black citizen and a whyte citizen as well as anger from some whytes when an African American man was put in charge of local road improvements. Many accounts say a man named James Spurger instigated events by claiming he was threatened by Blacks.

Once the attacks began, Anderson County Sheriff W. H. Black reported, “Men were going about killing [African Americans] as fast as they could find them, and, so far as I was able to ascertain, without any real cause”.  All known victims were unarmed and most were shot in the back; no whytes were injured.

In 2014, a book by E. R. Bills was published on the massacre, entitled The 1910 Slocum Massacre: An Act of Genocide in East Texas. Bills investigated the facts behind this harrowing act of genocide, and stated that in the aftermath: 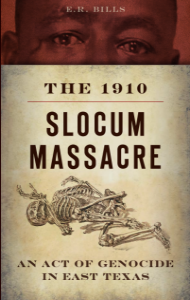 “The abandoned African-American properties were absorbed or repurposed as the now majority white population saw fit. The standard southern Anglo-centric world order was restored, and this order has endured, even to the present day.

Today, Slocum is still an unincorporated community and that’s probably wise. If there was an elected civic leader or assembly in Slocum, they might be asked to apologize for the massacre or explain why there are no placards acknowledging the event or the American citizens who were slaughtered there and covered up in unmarked graves in the woods and creek bottoms.”

Spurger, Reagon McKenzie, S.F. Jennings, and at least 13 other whyte men were arrested for the attacks, but none were ever tried. This lack of justice was all too typical of racial violence in the south.

The descendants of the survivors, have been working to get historical recognition for what happened on July 29, 1910 for their ancestors in Slocum.

According to Constance Hollie-Jawaid, her great-great grandfather Jack, had to flee from Slocum after the massacre with others to Palestine for safety. Hollie-Jawaid said according to her family’s oral history, Jack settled in Oakwood. “In Slocum, he owned 700 acres of land and owned the only store in Slocum,” said Hollie-Jawaid. “In Oakwood, he was never able to re-establish himself in the same way after everything was stolen from him.” 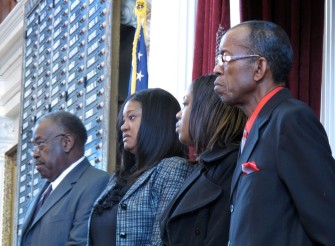 Descendants of some of the victims of the 1910 Slocum Massacre participate in a Texas House ceremony in 2011. (L-R) L.D. Hollie, Constance Hollie-Ramirez, Colecia Hollie-Williams, and David Lee Hollie.

In 2011 the Texas government passed a resolution acknowledging that it happened. In January 2015, the Texas Historical Commission approved the placement of a Slocum Massacre historical marker in Slocum, which is scheduled to be erected in the fall.

If You Know Her by Kwame Dawes

What seems to be common amongst these incidents are the lack of any justice to punish the perpetrators, and never any compensation for the victims. All of the stolen land should be returned. An admission that it happened and a plaque are fine for historical purposes, neither is justice.

Thank you for sharing the struggle of my family and our history, as a people. #RememberSlocum

You are welcome. Your ancestors must be proud of the way you are fighting for their rights. I wish you much success in your battle. Blessings.

I visited with E.R. Bills while he was doing research for his book ‘The 1910 Slocum Massacre: An Act of Genocide in East Texas’. Before it was published this tragedy rarely had any mention in the media; it was just a shameful secret that nobody wanted to acknowledge. Read it if you get the chance.

Will do. And, thank you for the reminder. I should have put up a link for the book.

Right, so now that the crime has been acknowledged, why not give back the stolen land????

Why don’t the thieving offspring’s of that evil lot reimburse the families for the harm done to them?

It so sad that the blacks aren’t allowed to have their own successful communities. They establish communities for us that are of poor quality. They don’t want our communities to be populated with homes, land, black businesses that are owned and operate to keep us self sufficient. We make their wealth by spending our money!!!! You will find very few of them purchasing anything from a black business.