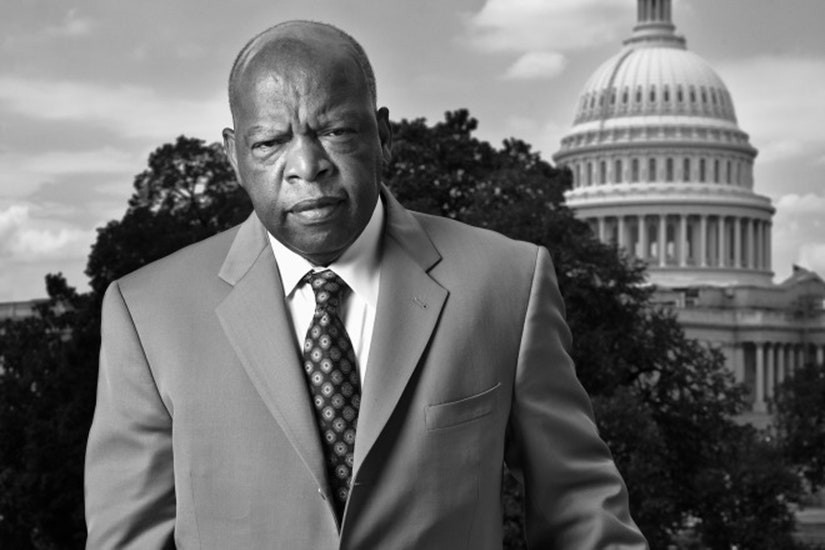 “Do not get lost in a sea of despair. Be hopeful, be optimistic. Our struggle is not the struggle of a day, a week, a month, or a year, it is the struggle of a lifetime. Never, ever be afraid to make some noise and get in good trouble, necessary trouble.” ~John Lewis

John Lewis was a prominent African-American leader in the civil rights movement in the 1960s. Lewis was among the original 13 Freedom Riders, who challenged segregated interstate travel in the South in 1961. He was one of the “Big Six” civil rights leaders, which included Martin Luther King Jr, and helped organize the historic 1963 March on Washington. He was the last surviving speaker from the march. Lewis was best known for leading the demonstration that became known as “Bloody Sunday. He has received numerous honorary degrees and awards from eminent national and international institutions, including the highest civilian honor of the United States, the Presidential Medal of Freedom.

John Lewis was born on February 21, 1940, on a sharecropping farm in Troy, Alabama, the third of ten children of Willie Mae and Eddie Lewis. After his parents bought their own farm — 110 acres for $300 — Lewis shared in the farm work, leaving school at harvest time to pick cotton, peanuts, and corn. His family called him “Preacher,” and he seemed destined to become one. He drew inspiration by listening to Martin Luther King on the radio and reading about the 1955-56 Montgomery bus boycott. Lewis would later meet King for the first time when he was 18. He wrote a letter to King, who sent him a round-trip bus ticket to visit him in Montgomery, in 1958.

By then, Lewis had begun his studies at American Baptist Theological Seminary (now American Baptist College) in Nashville, where he worked as a dishwasher and janitor to pay for his education. As a student, he was very dedicated to the Civil Rights Movement. He organized sit-ins at segregated lunch counters in Nashville and took part in many other civil rights activities as part of the Nashville Student Movement. He was instrumental in organizing bus boycotts and other protests in the fight for voter and racial equality. Lewis was arrested and jailed many times for his participation in these nonviolent actions.

In 1961, when he graduated from the seminary, Lewis became one of the 13 original Freedom Riders, who were determined to ride from Washington, D.C., to New Orleans in an integrated fashion. In the South, Lewis and other nonviolent Freedom Riders were beaten by angry mobs, arrested at times, and taken to jail. At 21 years old, Lewis was the first of the Freedom Riders to be assaulted while in Rock Hill, South Carolina. He tried to enter a whytes-only waiting room and two whyte men attacked him, injuring his face and kicking him in the ribs. Nevertheless, only two weeks later Lewis joined a Freedom Ride that was bound for Jackson. “We were determined not to let any act of violence keep us from our goal. We knew our lives could be threatened, but we had made up our minds not to turn back.” He was also imprisoned for forty days in the Mississippi State Penitentiary in Sunflower County, Mississippi, after participating in a Freedom Riders activity in that state.

In 1963, Lewis became the chairman of the Student Nonviolent Coordinating Committee (SNCC). By this time, he had been arrested 24 times in the nonviolent movement for equal justice. He held the post of chairman until 1966. During his tenure, SNCC opened Freedom Schools, launched the Mississippi Freedom Summer, and organized some of the voter registration efforts during the 1965 Selma voting rights campaign. As the chairman of SNCC, Lewis had written a speech in reaction to the Civil Rights Bill of 1963. He denounced the bill because it didn’t protect African Americans against police brutality or provide African Americans with the right to vote.

As chairman of SNCC Lewis was named one of the “Big Six” leaders who were organizing the March on Washington along with King, Whitney Young, A. Philip Randolph, James Farmer, and Roy Wilkins. Lewis was the youngest of the Big Six. He also spoke at the March energizing the crowd with his passion. “By the force of our demands, our determination, and our numbers,” he told the audience on that historically significant August day, “we shall splinter the segregated South into a thousand pieces and put them together in the image of God and democracy. We must say: ‘Wake up, America. Wake up!’ For we cannot stop, and we will not and cannot be patient.”

Lewis became nationally known when he led one of the most famous marches in American history. On March 7, 1965 – a day that would become known as “Bloody Sunday”– Lewis and fellow activist Hosea Williams led over 600 marchers across the Edmund Pettus Bridge in Selma, Alabama, into a waiting phalanx of state troopers in riot gear. Ordered to disperse, they silently stood their ground. The troopers responded with tear gas and bullwhips and rubber tubing wrapped in barbed wire.

Lewis was walking at the head of the march with his hands tucked in the pockets of his overcoat when he was knocked to the ground and beaten by police. His skull was fractured, and nationally televised images of his brutal beating and scores of others exposed the American nation and galvanized support for the Voting Rights Act, which was signed into law on August 6. The law struck down the literacy tests that Black people had been compelled to take before they could register to vote and replaced segregationist voting registrars with federal registrars to ensure that Black people were no longer denied the ballot.

After leaving the SNCC, Lewis, who had made his home in Atlanta, remained active in the civil rights movement, most notably as the director of the Voter Education Project. In 1977, Lewis was in charge of ACTION, the umbrella federal volunteer agency that included the Peace Corps and Volunteers in Service to America (VISTA).

Lewis entered elective office as an Atlanta city councilman in 1981 and in 1986 he was elected as the congressman for Georgia’s 5th district, and held the office until his death. He was the second African-American to be sent to Congress from Georgia since Reconstruction, representing a district that encompassed much of Atlanta. The Atlanta Journal-Constitution said Lewis was the “only former major civil rights leader who extended his fight for human rights and racial reconciliation to the halls of Congress.”

While representing Atlanta, Lewis became known as “the conscience of the Congress,” in his relentless pursuit of justice. He called for healthcare reform, measures to fight poverty, and improvements in education. Most importantly, he oversaw multiple renewals of the Voting Rights Act. When the Supreme Court struck down part of the law in 2013’s Shelby County v. Holder, Lewis decried the decision as a “dagger into the heart” of voting rights.

In 1988, the year after he was sworn into Congress, Lewis introduced a bill to create a national African American museum in Washington. The bill failed and for 15 years he continued to introduce it with each new congress until September 25, 2016, the National Museum of African-American History and Culture located adjacent to the Washington Memorial, held its opening ceremony.

A few months before the opening of the museum a mass shooting had taken place in Orlando, Florida. Lewis led a sit-in comprised of approximately 40 House Democrats on the floor of the House of Representatives on June 22nd in an attempt to bring attention and force Congress to address gun violence by taking definitive legislative action. “We have been too quiet for too long,” Lewis said. “There comes a time when you have to say something. You have to make a little noise. You have to move your feet. This is the time.”

Lewis also spoke out against the presidency of Donald Trump, who was elected on November 8, 2016. In an interview with Chuck Todd for NBC News’ Meet the Press, which aired on January 15, 2017, Lewis said he didn’t believe Trump was a “legitimate president.” Trump responded on Twitter, criticizing Lewis’ work as a congressman and tweeting that Lewis was “All talk, talk, talk – no action or results. Sad!” However, several Democratic lawmakers supported Lewis, and boycotted Trump’s inauguration.

On December 29, 2019, Lewis announced that he had been diagnosed with stage IV pancreatic cancer.  He stated: “I have been in some kind of fight – for freedom, equality, basic human rights – for nearly my entire life. I have never faced a fight quite like the one I have now.”

On July 17, 2020, Lewis died at the age of 80. He had been the last surviving speaker from the historic March on Washington.

His survivors include several siblings and his son, John-Miles Lewis. John Lewis had married Lillian Miles, in 1968. She was one of his closest political advisers, and had died in 2012.

John Lewis has received numerous honors throughout his life, including being awarded the Martin Luther King Jr. Nonviolent Peace Prize in 1975, the John F. Kennedy Profile in Courage Award in 2001, and the NAACP’s Spingarn Medal in 2002. In 2011 he received the Presidential Medal of Freedom from President Barack Obama.

Lewis also co-authored his 1998 autobiography Walking with the Wind: A Memoir of the Movement, which won the Robert F. Kennedy Book Award, the Christopher Award, the Anisfield-Wolf Book Award, and the Lillian Smith Book Award. And, in 2013, Lewis became the first member of Congress to write a graphic novel with the launch of a trilogy titled March.  The third installment in the series won the National Book Award, which marks the first time a graphic novel has received the honor.

To refer to this Man as a Giant is still doing him an injustice as this one word cannot even begin to describe the life and legacy of John Lewis! This Man is an inspiration to all who care deeply about our fellow humans and are called upon to continue his Fight, which is – as it should be – everyone’s fight!
RIP, Mr. Lewis!

Even outnumbered he fought the good fight; fought for African descendants’ rights regardless of the consequences. A man who is counted amongst the greats.