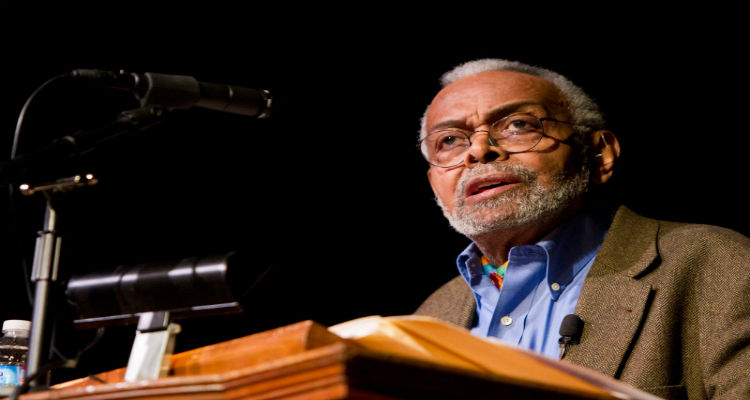 Amiri Baraka wrote the poem Somebody Blew Up America about the September 11th Attacks. The poem was explicit in its condemnation of US foreign policy which Baraka felt created a climate of terrorism.

In response, the Governor of New Jersey, Jim McGreevey tried to remove Baraka from his post as Poet Laureate of New Jersey. As there was no legal way to remove him, legislation was introduced in the State Senate to abolish the post. This was signed into law by Governor McGreevey, and on July 2, 2003, Baraka ceased being the poet laureate. He in turn sued McGreevy and in response, the United States Court of Appeals for the Third Circuit ruled that state officials were immune from such suits.

In November 2007 the Supreme Court of the United States refused to hear an appeal of the case.

Somebody Blew Up America:

“They say its some terrorist,
some barbaric
A Rab,
in Afghanistan
It wasn’t our American terrorists
It wasn’t the Klan or the Skin heads
Or the them that blows up nigger
Churches, or reincarnates us on Death Row
It wasn’t Trent Lott
Or David Duke or Giuliani
Or Schundler, Helms retiring

They say (who say?) Who do the saying Who is them paying Who tell the lies Who in disguise Who had the slaves Who got the bux out the Bucks

Who got the tar, who got the feathers Who had the match, who set the fires Who killed and hired Who say they God & still be the Devil

Who bought the slaves, who sold them

Who called you them names Who say Dahmer wasn’t insane

Who stole Puerto Rico Who stole the Indies, the Philipines, Manhattan Australia & The Hebrides Who forced opium on the Chinese

Who owned the slave ship Who run the army

Who the fake president Who the ruler Who the banker

Who own this city

Who own the ocean

Who found Bin Laden, maybe they Satan Who pay the CIA, Who knew the bomb was gonna blow Who know why the terrorists Learned to fly in Florida, San Diego

Who need fossil fuel when the sun ain’t goin’ nowhere

Who make the credit cards Who get the biggest tax cut Who walked out of the Conference Against Racism Who killed Malcolm, Kennedy & his Brother Who killed Dr King, Who would want such a thing? Are they linked to the murder of Lincoln?

Who killed Huey Newton, Fred Hampton, Medgar Evers, Mikey Smith, Walter Rodney, Was it the ones who tried to poison Fidel Who tried to keep the Vietnamese Oppressed

Who put a price on Lenin’s head

Who put the Jews in ovens, and who helped them do it Who said “America First” and ok’d the yellow stars

Who killed Rosa Luxembourg, Liebneckt Who murdered the Rosenbergs And all the good people iced, tortured, assassinated, vanished

Who blew up the Maine & started the Spanish American War Who got Sharon back in Power Who backed Batista, Hitler, Bilbo, Chiang kai Chek

Who decided Affirmative Action had to go Reconstruction, The New Deal, The New Frontier, The Great Society,

Who overthrew Nkrumah, Bishop, Who poison Robeson, who try to put DuBois in Jail Who frame Rap Jamil al Amin, Who frame the Rosenbergs, Garvey, The Scottsboro Boys, The Hollywood Ten

Who set the Reichstag Fire

Who knew the World Trade Center was gonna get bombed Who told 4000 Israeli workers at the Twin Towers To stay home that day Why did Sharon stay away?

Who is the ruler of Hell? Who is the most powerful

Who you know ever Seen God?

But everybody seen The Devil

Like an Owl exploding In your life in your brain in your self Like an Owl who know the devil All night, all day if you listen, Like an Owl Exploding in fire. We hear the questions rise In terrible flame like the whistle of a crazy dog

Sisters of the Yam Black Women and Self-Recovery

You Are by Kwame McPherson