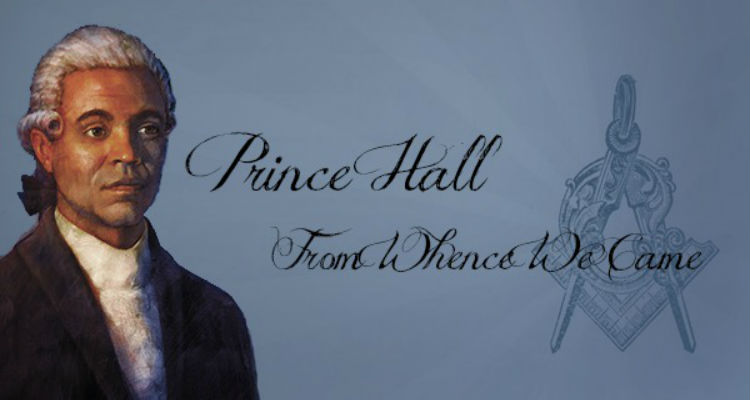 “… for they know that they dare not face you man for man, but in a mob.”

Prince Hall was an African American abolitionist, who was one of the most influential free Black leaders in the late 1700s. Prince Hall was one of the first Black Americans to be made a mason in America on March 6, 1775, in Boston. He was also the founder of the African Lodge of the Honorable Society of Free and Accepted Masons of Boston, the world’s first lodge of Black Freemasonry and the first society in American history devoted to social, political, and economic improvement. The African Lodge #1 was established on July 3, 1776, one day before the United States Declaration of Independence was adopted and issued on July 4, 1776.

There is confusion about his year of birth, place of birth, parents, and marriages–at least partly due to there being a number of “Prince Halls” during his lifetime. Prince Hall was born between 1735 and 1738. His place of birth and parents are unknown. The Prince Hall Grand Lodge of Massachusetts, in its Proceedings of 1906, opted for 1738, relying on a letter from Reverend Jeremy Belknap, a founder of the Massachusetts Historical Society. His birthday is traditionally celebrated on September 14.

Although Prince Hall’s early years are unclear, by 1770, he was a free, literate man, and had been always accounted as a free man. In Boston, he worked as a peddler, caterer, and leatherworker, owning his own leather shop. Prince Hall was a homeowner who voted and paid taxes.

During the American Revolutionary War (1775–1783), Prince Hall encouraged enslaved and freed Blacks to serve the American colonial military. He believed that if Blacks were involved in the founding of the new nation, it would aid in the attainment of freedom for all Blacks. He proposed that the Massachusetts Committee of Safety allow Blacks to join the military, comparing Britain’s colonial rule with the enslavement of Blacks. The proposal was declined.

When England issued a proclamation that guaranteed freedom to Blacks who enlisted in the British army, the Continental Army reversed its decision and allowed Blacks into the military. It is believed that Prince Hall was one of the six “Prince Halls” from Massachusetts to serve during the war.  After the Revolutionary War, Prince Hall collaborated with others to propose legislation for equal rights. He also hosted community events, such as educational forums and theatre events to improve the lives of Black people.

Prince Hall is considered the founder of “Black Freemasonry” in the United States, known today as Prince Hall Freemasonry. He was interested in the Masonic fraternity because Freemasonry was founded upon ideals of liberty, equality, and peace. Prior to the American Revolutionary War, Prince Hall and fourteen other free Black men petitioned for admittance to the whyte Boston St. John’s Lodge. They were turned down. Having been rejected by colonial Freemasonry, they sought and were initiated into Masonry by members of Lodge No. 441 of the Grand Lodge of Ireland on March 6, 1775. The Lodge was attached to the British forces stationed in Boston. Hall and other freedmen founded African Lodge No. 1 and he was unanimously elected its Grand Master and served until his death in 1807, on December 4.

Today, the Prince Hall fraternity has over 4,500 lodges worldwide, forming 46 independent jurisdictions with a membership of over 300,000 masons.