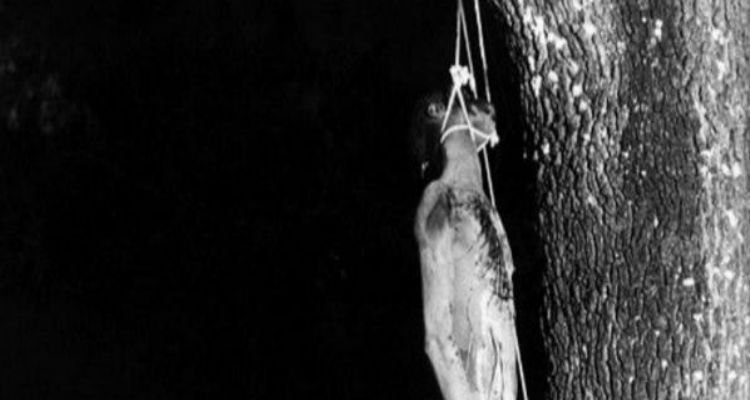 Claude Neal was a 23-year-old African-American man who was arrested and lynched in Jackson County, Florida on October 26, 1934. He never got to trial. It was one of the most horrific acts of violence in the USA during the Great Depression.

On October 19, 1934, Lola Cannady, a young Euro-American woman missing from the night before, was found murdered and was thought to have been raped. Claude Neal, 23, of Greenwood, Florida was arrested on the same day, accused of the crime. Neal, when arrested, was working on a peanut farm belonging to John Green and had grown up across the road from Lola Cannady’s family. He was taken into custody with another man who investigating officers believed to be involved in the murder and questioned. It was alleged that he confessed and signed a written confession, stating that he had acted alone. Given what is known about conditions at the time, and that he was questioned in the woods, it is likely that he was physically abused to coerce a confession. When the news got out about his arrest, Euro-American lynch mobs began to form. A band of more than three hundred men armed with guns, knives, torches, and dynamite went searching for Neal in every jail within a seventy-five-mile radius of Marianna. The manhunt forced the authorities to move Neal across the panhandle, from Marianna to Panama City by car, to Camp Walton by boat, to the Escambia County sheriff, who feared that his jail was too dilapidated to withstand attack, decided to take Neal out of state altogether, to the tiny town of Brewton, Alabama,

However, someone leaked Neal’s whereabouts, and a lynching party of some one hundred men drove several hours on Highway 231 in a thirty-car caravan from Florida to Alabama. There the men managed to divert the local sheriff and overtake the deputy. They stormed the jail and took Neal, his limbs bound with a plow rope, back to Marianna and Jackson County, where he would be subjected to the most brutal and savage torture imaginable. Neal’s chief abductors, a self-described “committee of six,” told the newspapers that they intended to lynch Neal at 8PM, at the Cannady Farm (when most everyone would be off work). They stated that their decision was justified, as he did not deserve a trial because of the heinous nature of his crimes. News of the ‘spectacle lynching’ was published by the Dothan Eagle and announced on the Dothan, Alabama radio station. The Associated Press sent a reporter to Marianna, and a reporter from the International News Service also covered the story. The governor of Florida was apprised but said local officials had to request his aid in order for him to send in the National Guard, and they had not.

Well before the appointed hour, several thousand people had gathered at the lynching site. The crowd grew so large and unruly–people having been given sufficient forewarning to come in from other states–that the “committee of six” fearing a riot, took Neal to the woods by the Chipola River to wait out the crowds and torture him before the execution.

There, his captors took knives and castrated him in the woods. Then they made him eat the severed body parts “and say he liked it.” He was stabbed and burned with hot irons. Around his neck, they tied a rope and pulled it over a limb to the point of his choking before lowering him to raise him again and continuing the savage and brutal hanging until he finally died.

After taking [him] to the woods about four miles from Greenwood, they cut off his penis. He was made to eat it. They cut off his testicles and made him eat them and say he liked it… Then they sliced his sides and stomach with knives and every now and then somebody would cut off a finger or toe. Red hot irons were used on [him] to burn him from top to bottom.

The crowd waiting at the lynching site never got to see Neal die. His body was tied to a rope on the rear of an automobile and dragged over the highway to the Cannady home. When the car reached its destination, a man who was riding the rear bumper cut the rope. A crowd estimated to number somewhere between 3000 and 7000 people from eleven southern states was excitedly awaiting his arrival. It was reported that George Cannady, the dead girl’s father, was so angry that Neal was killed before he could get to him that he shot Neal three times in the forehead. He said, “They done me wrong about the killing. They promised me they would bring him up to my house before they killed him and let me have the first shot. That’s what I wanted.” Also, a woman came out of the Cannady house and drove a butcher knife into Neal’s heart. The crowd then attacked his corpse. They kicked his body, stabbed it, and ran over it with cars. Some people cut off toes or fingers for souvenirs. Children were encouraged to stab the body with sharpened sticks. 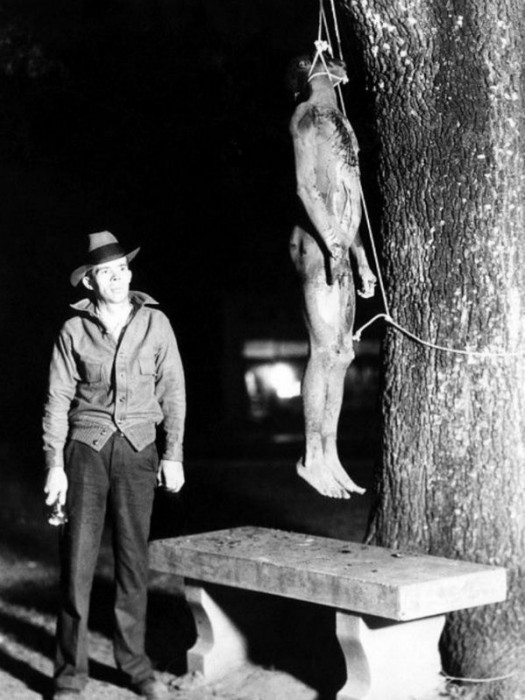 The body of Claude Neal, which by this time was horribly mutilated, was taken to Marianna, a distance of ten or eleven miles, where it was hung from a tree outside of the county courthouse at 3AM. When the sheriff cut down the body the next morning, a mob of as many as two thousand people demanded that it be rehanged. When the sheriff refused to return it to the tree, the mob attacked the courthouse and rampaged through Marianna, attacking any African-American they ran into.

Pictures were taken of Neal’s mutilated body and hundreds of photographs were sold for 50 cents each. Scores of people viewed his nude body as it hung in the square, until the early morning when someone had the decency to hang a burlap sack over the middle of the body. The body was cut down about 6AM on Saturday morning, October 27, 1934, and buried by the Sheriff.

In the next few days, Euro-Americans rioted in an attempt to drive African-Americans from the county, injuring an estimated 200 persons, including two police, and destroying African-American properties. The governor of Florida called out 129 troops of the National Guard, which managed to suppress the riots.

Circumstantial evidence was collected against Neal, but nothing directly linked him to the crime. Across the country, thousands of outraged Americans wrote to President Franklin D. Roosevelt demanding a federal investigation. The NAACP compiled a sixteen-page report and more files on the Neal case than any other lynching in American history. No one was ever charged in Neal’s death or spent a day in jail for it. The Jackson County grand jury, in the common language of such inquests, reported that the execution had occurred “at the hands of persons unknown to us.”

Soon afterward, it was learned that Neal and the dead girl, who had known each other all their lives, had been lovers and that people in her family who discovered the liaison may have been involved in her death for the shame it had brought to the family. Indeed, the summer after Neal was lynched, the girl’s father was convicted of assault with intent to kill his niece because he suspected that that side of the family had had a hand in his daughter’s death.

In sentencing the father to five years in prison for attacking the relative, the judge said, “I hate to pass this sentence on an old man such as you, but I must do it. To be perfectly fair with you, I don’t believe you have any too many brains.” The father replied, “Yes, judge. I am plumb crazy.”

Fingers and toes from Neal’s body have been exhibited as souvenirs in Marianna where one man offered to divide the finger which he had with a friend as “a special favor.” Another man has one of the fingers preserved in alcohol.