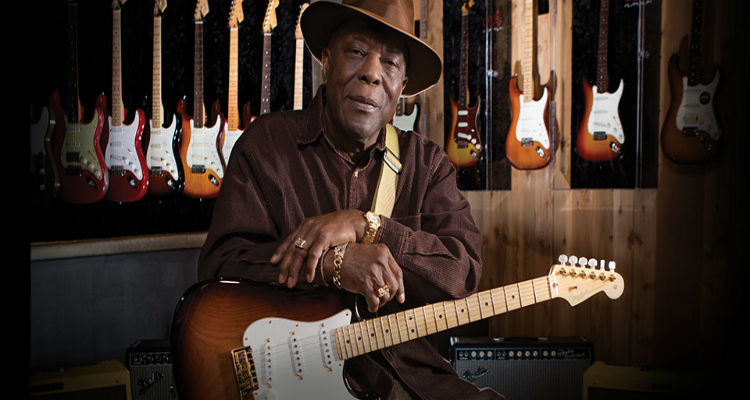 George “Buddy” Guy is an African American blues guitarist and singer, described by Eric Clapton as “the best guitar player alive”. Buddy Guy is an exponent of Chicago blues and has influenced guitarists including Jimi Hendrix, Eric Clapton, Jimmy Page, Jeff Beck, John Mayer and Stevie Ray Vaughan. Ranked 30th in Rolling Stone magazine’s 100 Greatest Guitarists of All Time, Buddy Guy was one of the first to play guitar behind his head and to swing it between his legs. Buddy Guy has won six Grammys, 23 W.C. Handy Awards, and is the recipient of the National Medal of the Arts.

Guy was born and raised in Lettsworth, Louisiana. He taught himself to play music on a homemade two-string diddley bow, and showed so much talent he was given a Harmony acoustic guitar. After moving to Chicago in 1957, he fell in with Muddy Waters. With assistance from his friend Magic Sam, Guy was signed to Cobra, which soon folded—landing Guy a coveted spot with Chess Records. Despite the fact that Chess employed Buddy often as a session guitarist on a number of classic records, fierce politics kept him from releasing the work he wanted to. In 1968, he moved to Vanguard records, where he partnered with harmonica player Junior Wells. Guy and Wells would go on to release some of the greatest blues albums ever—produced by the likes of Eric Clapton and Bill Wyman. Though his career slowed in the eighties, Guy came back full force in 1990 with a record that would hit Gold.

For almost 50 years, Guy has performed flamboyant live concerts of energetic blues and blues rock, predating the 1960s blues rockers. A brilliant songwriter and a blistering vocalist, his music is often labelled Chicago blues, but his style is unique and separate. His music can vary from the most traditional, deepest blues to a creative, unpredictable and radical gumbo of the blues, avant rock, soul and free jazz that morphs at each night’s performance. Buddy Guy has been called the bridge between the blues and rock and roll. He is one of the historic links between Chicago electric blues pioneers Muddy Waters and Howlin’ Wolf and popular musicians like Eric Clapton, Jeff Beck, Jimi Hendrix and Jimmy Page as well as later revivalists like Stevie Ray Vaughan. Vaughan stated that, “Without Buddy Guy, there would be no Stevie Ray Vaughan.” Clapton has stated that he got the idea for a blues-rock power trio while watching Buddy Guy’s trio perform in England in 1965.

Guy’s autobiography, When I Left Home: My Story, was published in 2012.