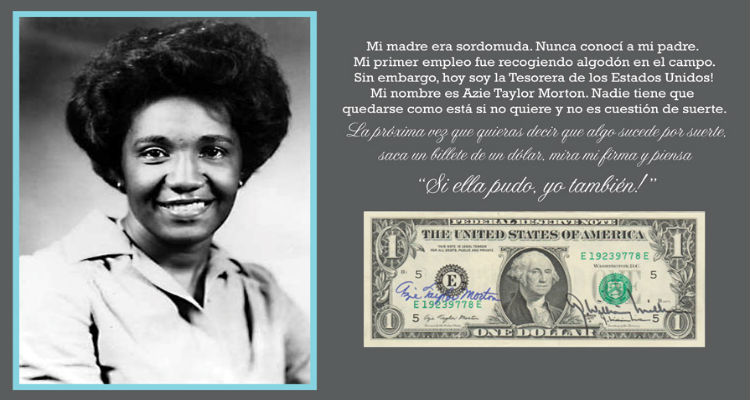 “It isn’t luck, and it isn’t circumstances, and it isn’t being born a certain way that causes a person’s future to become what it becomes.”

Azie Taylor Morton is distinguished as the only African American ever to hold the post of Treasurer of the United States. Appointed by President Jimmy Carter on September 12, 1977, Morton served as the United States’ 36th Treasurer until January 20, 1981. Her signature was printed on U.S. currency for three years.

Azie Taylor was born to Fleta Hazel Taylor on February 1st, 1936 in the small community of St. John Colony of Dale, Texas. Morton said in a speech to the student body of a small college in South Carolina (as quoted in Chicken Soup for the Soul at Work), “I was born to a mother who was deaf and could not speak. I do not know who my father is or was. The first job I ever had was in a cotton field.”

Morton was raised by her maternal grandparents on a small farm. Although she was not blind, deaf or an orphan, she attended the Texas Blind, Deaf, and Orphan School during her high school years because there was no high school for African Americans in Dale. She graduated at the top of her class at age 16.

In 1952 Morton enrolled in Huston-Tillotson University, an all-Black college in Austin, Texas. Four years later she graduated cum laude with a bachelor of science degree in commercial education. Although she applied to graduate school at the University of Texas, her admission was denied on the grounds that she did not have enough undergraduate courses, based on Texas University’s policy of not allowing African Americans into its undergraduate programs. In spite of this emotional setback, Morton began a fulfilling and successful forty-five year career. “Nothing has to remain the way it is if that’s not the way a person wants it to be,” Morton was quoted in Chicken Soup for the Soul at Work.

Morton took a job as a teacher in a state-sponsored school for delinquent girls. A year later, she returned to her alma mater to serve as assistant to the president of the college for a short time. In 1957 she applied and was hired as a staff member for the new Texas AFLCIO, a major labor union. She later moved to Washington to serve on President John F. Kennedy’s Committee on Equal Employment Opportunity, beginning twenty years of service in the public sector.

In 1977 Morton accepted President Jimmy Carter’s invitation to serve as the 36th Treasurer of the U.S. She held the post from September 12th 1977 until January 20th, 1981. In addition she was a member of the American Delegation to Rome, Italy for the Enthronement of Pope John Paul II in 1978; Chair of the People to People Mission to the Soviet Union and China in 1986; and an Election Observer for Presidential elections in Haiti, Senegal and the Dominican Republic. She also was a representative to the first African/African American Conference held in Africa.

After returning to Austin, Morton served on the Austin Housing Authority Board of Commissioners (HACA) from 1999 to 2001. On the PRWeb Web site, James L. Hargrove, Executive Director of HACA said that Morton “was a leading voice in the push for awarding scholarships to low-income residents.” Consequently, the HACA set up the Azie Taylor Morton Scholarship Fund after her death, donating $5,000 in her name to provide scholarships for low-income students attending Huston-Tillotson College. Through this scholarship Morton will be remembered as a person who worked across racial, religious, and ethnic lines, and loved working with young people. In the Austin American-Statesman newspaper, Lavon Marshall, friend and colleague of Morton, said, “She tried to share with them her hardships growing up and tried to encourage them to do better.”

In addition to her political career, Morton was one of the directors for a company called HIV-VAC, a Nevada corporation that conducts HIV research. She also served on the Citizens Fund Board of trustees for ten years, from 1991-2001, including five years as chair. At the time of her death, she was manager of Ram Bookstore, an independent store that served Huston-Tillotson students. She was president of Exeter Capital Asset Management Co., and a member of Schlotzsky’s Deli board of directors. She had also previously served on the boards of Wendy’s Old Fashioned Hamburgers, St. Edward’s University, the National Democratic Institute, and Austin Children’s Museum. “She was a no-nonsense kind of woman but at the same time a caring woman,” said Texas state representative Dawnna Dukes in the Austin American-Statesman. “She taught you that you could be a woman and an African American and succeed regardless of the obstacles before you.”

Azie Taylor married James Homer Morton on May 29, 1965. The couple had two daughters, Virgie Floyd and Stacey Hurst, who later brought them two granddaughters and three great-grandchildren. James Homer Morton died in January of 2003. Morton’s daughter Stacey recalled in a prize-winning essay that her mother used to invite students into their home who were unable to spend holidays with their families, and to provide furniture, clothing, and gifts to students who could not afford them. She did all of these good deeds, and “asks for nothing in return,” her daughter wrote. “My father passed away in January 2003,” Stacey says, “and she has suffered the loss of her life companion of 37 years. In the midst of the mourning, she is managing to financially support the weddings of both my sister and myself—within the same year—despite the loss of financial support provided from my father.”

Azie Taylor Morton experienced a massive stroke at her home in Austin Texas on December 6th, 2003. She died the following day from complications due to the stroke, only months after her husband.

The Union of Two by Haki R. Madhubuti