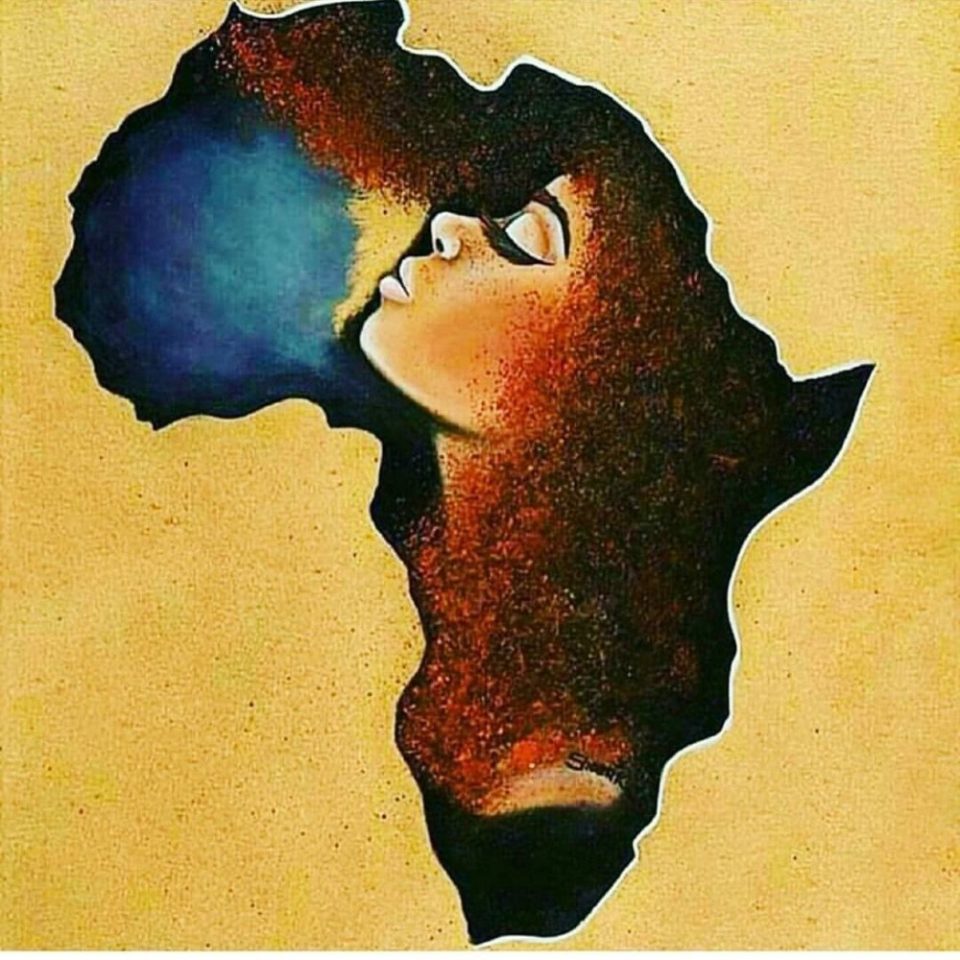 This “Afrikan” story is taken from the novel, Zenzele: A Letter for My Daughter by Nozipo Maraire.

My father once took me aside as a young girl. I had returned from the fields alone… That morning, I had skipped school for the first time in my life. I had fallen in love, or so I thought, with a young [man] who had persuaded me to go and climb the kopjes near Thirty Miles instead of learning about Livingstone and Rhodes. I have no idea to this day if my father knew of my deviant behavior or not. He was a man who saw much and said little. Like my mother, he believed that one’s deeds were more powerful than idle words… As I mounted the steps, I saw him sitting on the porch in his rickety old chair…

‘My daughter, sit here a moment.’ Whenever he spoke in that tone, that low calm voice, he sounded like a cross between a priest giving a blessing and a judge meting out a sentence. He became omniscient and fearsome. I kneeled down on the cool floor…bent my head low and awaited my sentence.

‘There is a story I would like to tell you. Are you listening my child?’

He told me a story that I shall never forget.

‘In a quiet village near the Chimanimani mountains lived a happy couple with their baby. The husband was much older, but he was kind, faithful and gentle to his young wife. Over the years, however, the wife became restless and one day she fell in love with a young man from the neighbouring village. After several months, the lover grew weary of their secret meetings. He begged her to marry him and leave her husband. Initially, she protested, but he wore down her resistance.

‘One day he said, “Darling, I need you. Let us run away together. I love you and cannot bear to share you with another man any longer.”

“But what of my husband? My child?” she protested.

“Let us poison your husband; after all he is old. No one will suspect us. then we shall run away to a beautiful paradise where we can begin a new life together.”

‘The young woman cried and wrung her hands. “I cannot. He has been a good and honest husband.”

“Then you do not love me!” raged her lover.

‘The young woman pleaded with him but he ignored her. “Since you do not love me, I am going away.”

‘The young woman grew desperate and in the end conceded to his plan. Two days later, they poisoned the gentle old man. They stole away that evening. They walked through dense forests and hot deserts. Every now and then, they had to stop so that she could nurse [her child] which she carried on her back. Finally at daybreak, they arrived at a large river.

“There, my darling, do you see? Right across this river and over that hill lies the paradise that I promised you. We shall be happy there.”

‘It was a deep and swirling river, so they waded slowly along, hand in hand, as they braved the rough waves. About halfway across the [child] began to wail. The lover turned to hear and said, “The child has worn you out. It is a burden to travel with and will only slow us down later. Let us start a truly fresh beginning. Why don’t you drown the baby in the stream? We cannot support it anymore.”

‘The woman was horrified. she began to sob and wail. “I cannot! It is my child, my very own blood.” She clasped the child to her breast.

“Then you do not believe that we shall have another family and be happy? You do not trust me? After we have come so far, do you doubt me now?”

‘The woman wept bitterly as she plunged the screaming child into the swirling current of the river. As soon as the little body was swept away by the foaming waves the man turned to the woman and looked at her in disbelief. “There,” she said. “I have done it for you. Let us go in haste. I cannot bear to stand here and think of my deeds a second longer. Let us start afresh.” She was amazed to find that her lover did not stir, but was staring at her in disgust.

“What sort of an unnatural woman are you? What sort of mother would drown her own child with her bare hands? You have killed that to which you gave life.”

“But I did it for you!” she whispered, bewildered. “Please, let us go now.”

“I will go nowhere with you! You are a murderer. You poisoned your own husband, a kind and gentle man. Now you have killed your own child. What guarantee do I have that, upon reaching the paradise ahead, after a few years you will no open your ears to another lover’s charm and poison me? What if a fairer lover tempts you again? Begone, you unnatural wretch! I am going to find a wife who is honorable and true!”

‘And off, he went. The woman howled and pulled out her hair. She was left abandoned, degraded and alone.’

When he had finished, I gave a shudder. My father concluded by saying very solemnly, ‘My daughter, you will meet many men in life. Allow none to tempt you to abandon your principles. Follow what is right. Stick to the path of honesty and integrity. You are a strong girl, let no one break you. There is not a man in the world who is worth your dignity. Do not confuse self-sacrifice with love… Keep these words.’

Mountain of Peace and Prosperity