Denise McNair, Cynthia Wesley, Addie Mae Collins and Carole Robertson, those were the names of the four little girls who were murdered on September 15th, 1963, when the Ku Klux Klan bombed the 16th Street Baptist Church in Birmingham, Alabama. Denise was 11 years old; Cynthia, Addie Mae, and Carole were 14.

The act of whyte supremacy terrorism, was described by Dr. Martin Luther King, Jr. as “one of the most vicious and tragic crimes ever perpetrated against humanity.”

On September 15, 1963, four members of the Ku Klux Klan planted at least 15 sticks of dynamite attached to a timing device beneath the front steps of the 16th Street. Some 200 church members were in the building–many attending Sunday school classes, before the start of the 11 am service. At 10:22 a.m., the bomb detonated on the church’s east side, spraying mortar and bricks from the front of the church and caving in its interior walls. The force of the explosion was such that concrete blocks were torn loose and hurled outwards, windows were blown out of shops and houses nearby, and several cars parked outside were destroyed. The children were reading from the Gospel of St. Matthew: “But I say unto you, love your enemies,” when the explosion happened. Only one stained glass window in the church had remained unbroken: it showed Christ leading a group of little children.

Most parishioners were able to evacuate the building as it filled with smoke. One witness said he saw about sixty people stream out of the shattered church, some bleeding. Others emerged from a hole in the wall. Across the street a woman stood weeping. She clasped a little girl’s shoe. “Her daughter was killed,” a bystander said. One of the children was so badly mutilated that she could only be identified by clothing and a ring. Ten-year-old Sarah Collins, who was also in the restroom at the time of the explosion, was hit with shards of glass, lost an eye and was hospitalized for months. More than 20 other people were injured in the blast. 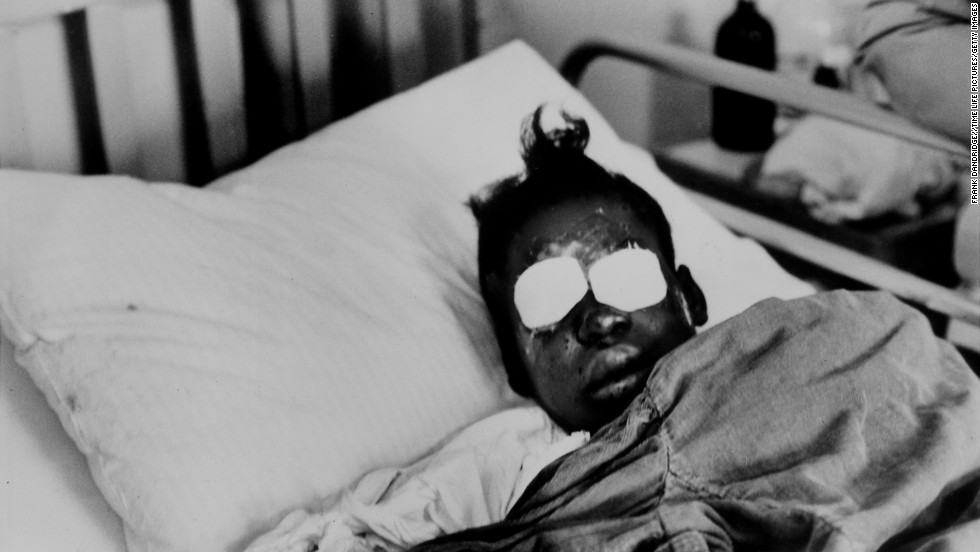 Hospitalized bomb blast victim Sarah Jean Collins, 12, blinded by dynamite explosion set off in basement of church that killed her sister and three other girls as her Sunday school class was ending. (Photo by Frank Dandridge//Time Life Pictures/Getty Images)

In her later recollections of the bombing, Collins would recall that in the moments immediately before the explosion, she had observed her sister, Addie, tying her dress sash. Another sister of Addie Mae Collins, 16-year-old Junie Collins, would later recall that shortly before the explosion, she had been sitting in the basement of the church reading the Bible and had observed Addie Mae Collins tying the dress sash of Carol Denise McNair before she had herself returned upstairs to the ground floor of the church.

The bombing of the 16th Street Baptist Church on September 15 was the third bombing in 11 days, after a federal court order had come down mandating the integration of Alabama’s school system. The 16th Street Baptist Church, which had long been a significant religious center for the city’s black population, was also a routine meeting place for civil rights organizers like King. Many of the civil rights protest marches that took place in Birmingham during the 1960s began at the steps of the church. KKK members had routinely called in bomb threats intended to disrupt civil rights meetings as well as services at the church.

In the aftermath of the bombing, thousands of distraught, weeping African Americans gathered at the scene of the bombing. Face with the destruction of the church and death of the children, they began throwing stones at police, who sent for riot equipment. Later when Governor Wallace ordered 150 State troopers into the area to break the protests up, violence broke out across the city.

Some civil rights activists blamed George Wallace, the Governor of Alabama and an outspoken segregationist, for creating the climate that had led to the killings. One week before the bombing, Wallace granted an interview with a The New York Times journalist in which he said he believed Alabama needed a “few first-class funerals” to stop racial integration.

A number of African American protesters were arrested; and two Black youths, Johnny Robinson and Virgil Ware, were shot to death in Birmingham within seven hours of the Sunday morning bombing.

Robinson, aged 16, was shot in the back by a policeman as he fled down an alley, after ignoring police orders to halt. The police were reportedly responding to black youths throwing rocks at cars driven by whyte people. Robinson died before reaching the hospital. Ware, aged 13, was shot in the cheek and chest with a revolver in a residential suburb 15 miles north of the city. A 16-year-old whyte youth named Larry Sims fired the gun (given to him by another youth named Michael Farley) at Ware, who was sitting on the handlebars of a bicycle ridden by his brother. Sims and Farley had been riding home from an anti-integration rally which had denounced the church bombing. When he spotted Ware and his brother, Sims fired twice, reportedly with his eyes closed. (Sims and Farley were later convicted of second-degree manslaughter, although the judge suspended their sentences and imposed two years’ probation upon each youth. 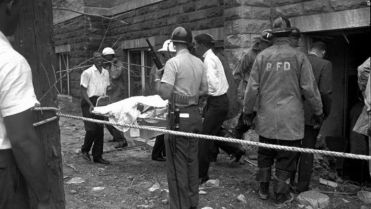 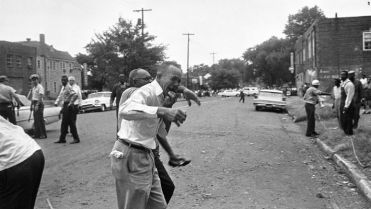 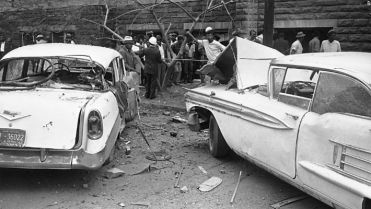 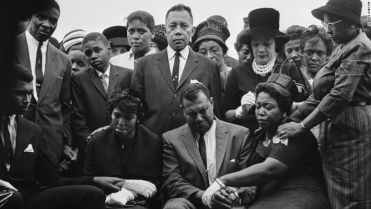 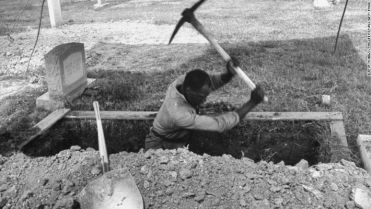 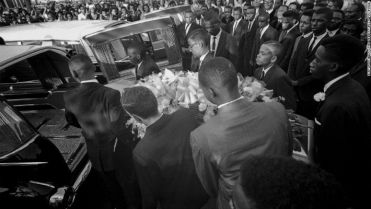 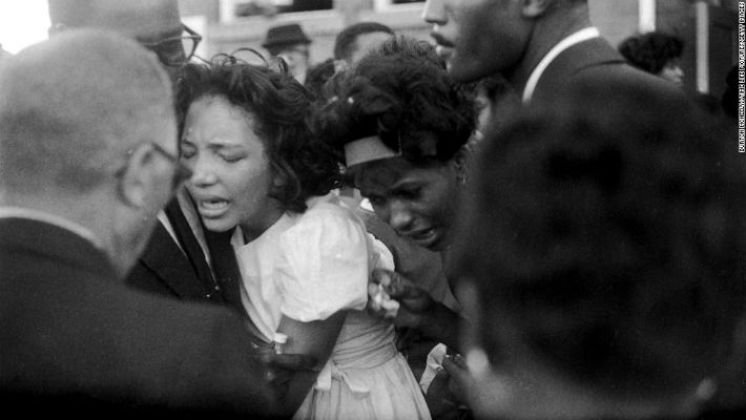 The day after the bombing, President John F. Kennedy responds by saying, “If these cruel and tragic events can only awaken that city and state – if they can only awaken this entire nation to a realization of the folly of racial injustice and hatred and violence, then it is not too late for all concerned to unite in steps toward peaceful progress before more lives are lost.”

In a telegram to President Kennedy, King said he would go to Birmingham to plead with African Americans to refrain from violence.

Carole Robertson was laid to rest in a private family funeral held on September 17, 1963. The service was held at St. John’s African Methodist Episcopal Church. In attendance were 1,600 people. Carole Robertson was buried in a blue casket at Shadow Lawn Cemetery.

On September 18, the funeral of the three other girls killed in the bombing was held at the Sixth Avenue Baptist Church. Although no city officials attended this service, present at the girls’ funerals were an estimated 800 clergymen of all races. Also present was Dr. Martin Luther King, Jr. In a speech conducted before the burial of the girls, Dr. King addressed an estimated 3,300 mourners—including numerous whyte people—with a speech which included: “This tragic day may cause the [whyte] side to come to terms with its conscience. In spite of the darkness of this hour, we must not become bitter … We must not lose faith in our [whyte] brothers. Life is hard. At times as hard as crucible steel, but, today, you do not walk alone.”

The city of Birmingham initially offered a $52,000 reward for the arrest of the bombers. Governor George Wallace himself offered an additional $5,000 on behalf of the state of Alabama. Although this donation was accepted, Dr. Martin Luther King, Jr. is known to have informed Wallace via telegram of his belief that “the blood of four little children … is on your hands. Your irresponsible and misguided actions have created in Birmingham and Alabama the atmosphere that has induced continued violence and now murder.”

Though Birmingham’s whyte supremacists (and even certain individuals) were immediately suspected in the bombing, repeated calls for the perpetrators to be brought to justice went unanswered for more than a decade. It was later revealed that the Federal Bureau of Investigation (FBI) had information concerning the identity of the bombers by 1965 and did nothing. (J. Edgar Hoover, then-head of the FBI, disapproved of the civil rights movement; he died in 1972.) In 1977, Alabama Attorney General Bob Baxley reopened the investigation and Klan leader Robert E. Chambliss was brought to trial for the bombings and convicted of murder. Continuing to maintain his innocence, Chambliss died in prison in 1985. The case was again reopened in 1980, 1988 and 1997, when two other former Klan members, Thomas Blanton and Bobby Frank Cherry, were finally brought to trial. Blanton and Cherry were each convicted of four counts of murder and sentenced to life imprisonment in 2001 and 2002 respectively, whereas Herman Cash, who died in 1994, was never charged with his alleged involvement in the bombing.

Although both Blanton and Cherry emphatically denied their involvement in the 16th Street Baptist Church bombing, until his death in 1985, Robert Chambliss repeatedly insisted that the bombing had been committed by Gary Thomas Rowe, Jr. Rowe had been encouraged to join the Klan by acquaintances in 1960 before becoming a paid FBI informant just two months after the bombing. In this role, Rowe acted as an agent provocateur between 1963 and 1965. Although informative, Rowe was known to actively participate in violence against blacks and civil rights activists. By Rowe’s own later admission, in his role as an FBI informant, he had shot and killed an unidentified black man and had been an accessory to the murder of Viola Liuzzo. Investigative records show that Rowe had twice failed polygraph tests when questioned as to his possible involvement in the 16th Street Baptist Church bombing and two separate, non-fatal explosions. These polygraph results had convinced some FBI agents of Rowe’s culpability in the bombing. Prosecutors at Chambliss’s 1977 trial had initially intended to call Rowe as a witness; however, William Baxley had opted not to call Rowe as a witness after being informed of the results of these polygraph tests. Although never formally named as one of the conspirators by the FBI, the fact Rowe had given deceptive responses to the polygraph tests does leave a possibility that Chambliss’s claims may have held a degree of truth. Nonetheless, a 1979 investigation cleared Rowe of any involvement in the 16th Street Baptist Church bombing.

The Birmingham campaign, the March on Washington, the bombing of the 16th Street Baptist church, and the later assassination of John F. Kennedy—an ardent supporter of the civil rights cause who had proposed a Civil Rights Act of 1963 on national television—increased worldwide awareness of and sympathy towards the civil rights cause. 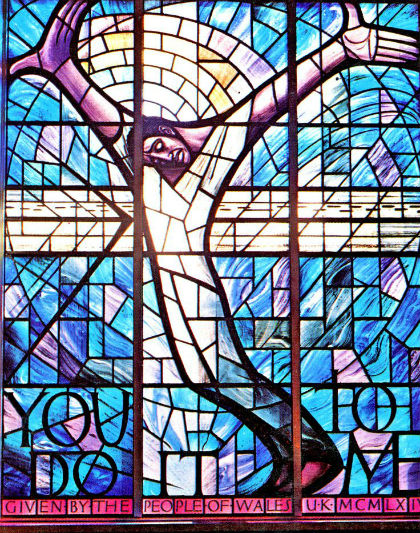 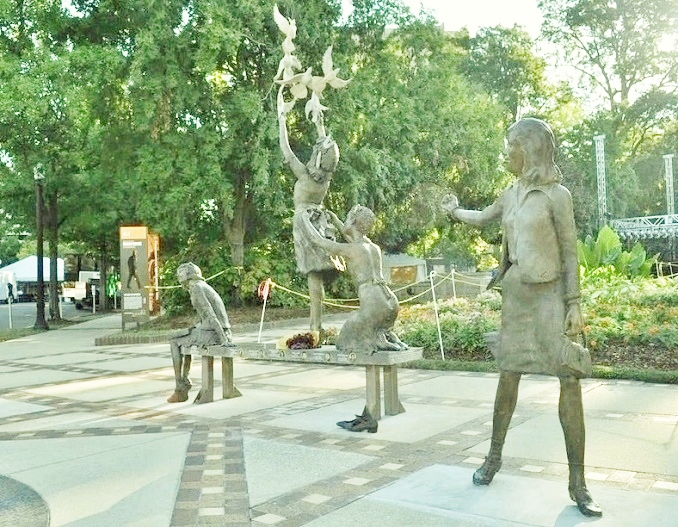 No woman can love a weak man hard enough to make him strong.