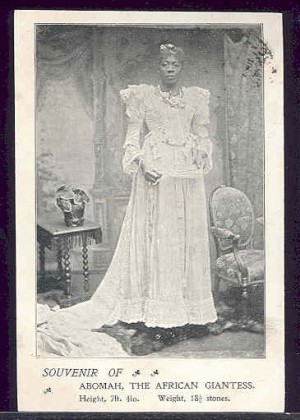 Mme. Abomah was known as the Amazon Giantess and the African Giantess. She was something of an international celebrity and traveled all over the world in the early 1900’s, as the tallest woman in the world: Australia, New Zealand, South America, France, Italy, Switzerland, Belgium, Germany, England, Scotland and Ireland. She was billed as being 7’6″ tall, but photographic evidence suggests she was more in the 6’10” – 6’11” range. A good number of photos still exist of her towering elegantly over other people.

Several sources say her real name was Ella Grigsby; a newspaper advertisement also calls her “Ella Abomah.” While still in her teens, Abomah went to work for Elihu and Harriet Williams. It is speculated that since Grigsby was the name of her parents’ slaveholder, she was reluctant to use it, and so adopted her employer’s last name. In nearly all sources, she’s known simply as “Abomah.” Abomah claimed none of her other siblings were unusually large and she had been contacted by various vaudeville and circus promoters to sign a contract and tour as a giantess, but always refused. However, while working as a cook in her native South Carolina, she agreed to be hired by Frank C. Bostock for a tour of the British Isles in 1896.

In her own words Mme. Abomah says “I was born near Cross Hill in Laurens county. None of my sisters or brothers are unusually large. For years every time a show man saw me he would want me to sign a contract, but I never could make up my mind to leave Columbia. Finally in the fall of 1896 while I was cooking for a prominent family in Columbia, Manager F.C. Bostock got me to sign up for a tour.” (1915)

Bostock was known as “The Animal King”; he specialized in presenting menageries of African wildlife. He renamed Ella, making her into Mme. Abomah (Abomey being the then-capital of Dahomey, now known as Benin), giving her out to be an African warrior princess. She was billed as a Dahomey Amazon, a real life caste of female bodyguards who protected the ruler.

An article in a British newspaper stated:

She was formerly one of the attendants and body guard of the barbaric King of Dahomey, whose Amazonian warriors have been famous alike for their prowess and cruelty. Trained for her bloodthirsty calling from early childhood, she was inured to hardship and pain. Her stature increasing out of proportion to her years, she became a particular favorite of the monarch, and led his army. This extraordinary woman stands over eight feet in height, and can easily support the weight of a man on her outstretched hand. The dusky beauty, having recently evinced a strong desire to travel, and particularly to visit England, will no doubt soon pay a visit to some of our principal cities. – London Tit-Bits (7 Sept 1900)

It’s said that Abomah and her manager took her act to Europe because racism in Europe was not as pronounced as in the United States and audiences there would be more receptive there to a very tall, strong, beautiful black woman. Over the course of her 30 year career Abomah was to tour not only Britain but most of continental Europe, Australia and New Zealand, South America, and Cuba.

According to her bio pamphlet which she sold at her shows Abomah appeared in 1900 in Liverpool with Reynold’s Waxworks and Exhibition; 1901 & 1902 at the Alhambra, Blackpool; 1903 with Reynold’s and later touring Australia; seasons 1904 – 08, touring New Zealand; 1909, South American tour; 1910- 11, European tour; 1912- 13, Reynold’s Waxworks; 1914, touring English variety halls; 1917 Dreamland at Coney Island and Cuba; 1918 with Barnum and Bailey. In 1920 she was at Dreamland and the World’s Museum and in 1921again at the World’s Museum in Philadelphia when it was announced that she was going to sail for Paris for a three months engagement.

In New Zealand, Abomah had very expensive and extensive wardrobe. Having an attendant invoked a sense of royalty. One New Zealand paper reported that “On Saturday evening, at the Alhambra Theatre, Abomah, the Amazon giantess, made her first appearance before a Dunedin audience after a general tour of Otago and Southland. She stands 7ft 6in in height, is a full-blooded negress, and was born in America. She is well-proportioned, and, needless to say, she completely dwarfs any average man or woman, and the expectations of the audience were more than realised, for the “tallest lady” was everything that had been announced about her, and she duly defied anyone in the audience to try conclusions with her in stretch of hand. Abomah, in addition to posing, contributed some songs, chief of which was “My Honolulu Bell,” and she rendered this item in a pleasing voice and with good effect. – Otago [NZ] Witness 1904

Britain declared war on Germany Aug 1914. Abomah cancelled her tours and returned to the United States in March of 1915 narrowly avoiding the attacks on London by German Zeppelins in April. She worked for Ringling Brothers Barnum & Bailey and at Coney Island. Her career continued into the 1920’s, and then apparently she disappears from history.

A traveled man is a rich man. His wealth is measured in knowledge and experience.