“Revolution moves in a mysterious way, its wonders to perform.” –C.L.R. James

“It was the first time in human history that enslaved people had destroyed a slave system, declared themselves rulers, and maintained that status in the face of open international hostility. The Haitians did this at a time when the entire hemisphere remained engulfed in slavery. They were the first in the modern period to declare the complete, simultaneous, abolition of African trading and slavery, and the universal right of man to be free of enslavement.” –Professor Hilary Beckles and Verene Shepherd

“We should not forget that the freedom you and I enjoy today,” he said, “is largely due to the brave stand taken by the black sons of Haiti ninety years ago . . . striking for their freedom, they struck for the freedom of every black man in the world.” –Frederick Douglass

The Haitian Revolution was the greatest revolution the world has ever known. The revolution which started on August 22, 1791 on the island, which came to be known as Ayiti (Haiti), and ended at the Battle of Vertieres on November 18, 1803, is the only successful revolution carried out by enslaved people in history. It is important to realize that the revolution did not involve two powerful armies facing each other. Rather, it was a revolution carried out by an oppressed people who started off by using their work tools to fight a guerrilla warfare, before they were trained into being a military force securing victory over three of the world’s powerful armies at the time. The revolution which destroyed both the Maafa/Atlantic slavery and French colonial rule, began under the leadership of Boukman Dutty, before the meteoric rise of Toussaint Louverture as a military commander. After Louverture’s arrest and imprisonment in France, the revolution was completed under the leadership of Jean-Jacques Dessalines. 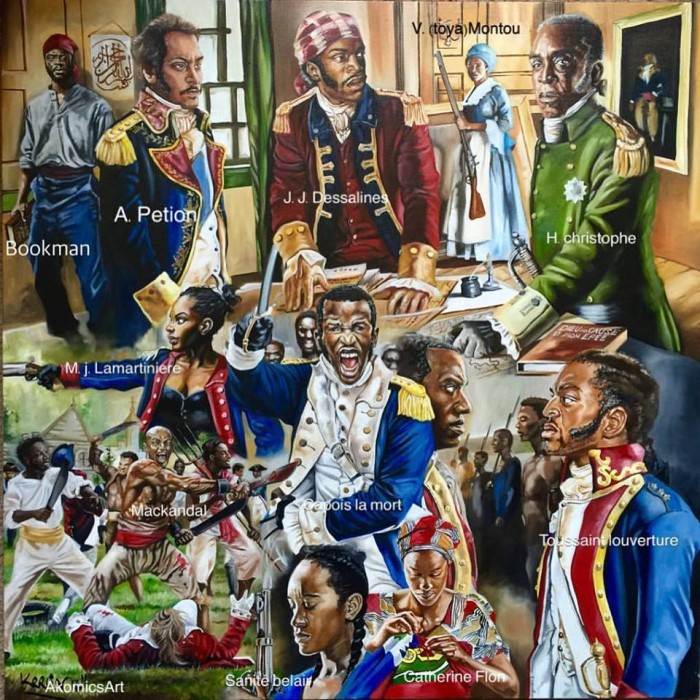 The French part of the island of Hispaniola, known as Saint Domingue, prided itself on being the richest colony in the world. The first shipment of African (from the Iberian Peninsula) to Haiti was in 1503, with the first Maafa/Atlantic slavery uprising recorded in 1522. In the 1780s it accounted for some 40 percent of French international trade and 40 to 50 percent of world coffee and sugar production. Within the colony lived 30,000 Europeans, together with 28,000 Gens de Couleur (free mixed-race and Black people), and almost 500,000 enslaved Blacks, two-third of whom had been born in Africa.

One week before the actual outbreak, on 14 August, representatives from the major plantations met up to discuss recent events in France and plans for the general insurrection. Numbering some two hundred in all, consisting of “two delegates each from all the plantations of Port-Margot, Limbe, Acul, Petite-Anse, Limonad, Plane du Nord, Quartier-Morin, Morne-Rouge, etc, etc” covering the entire central region of the North Province, they were assembled to fix the date for the revolt that they had been planning for some time. Documents (forged) were read out in which it was assured, amongst other things, that the French king had granted the enslaved Blacks partial freedom, which the enslavers refused to apply. They met at the Lenormand de Mezy plantation in Morne-Rouge, and all the delegates were upper-strata bondpeople – a small privilege caste; the foremen of the gang, coachmen, cooks, butlers, maid, nurses and house-servants – in whom their enslavers had placed their confidence. Most of them were commandeurs who exercised influence and authority over those working in the fields.

The early leaders forming the core of this movement were Boukman Dutty, Jeannot, Jean-Francois, and George Biassou. Dutty and Jeannot were to take charge of the initial stages of the movement, while Jean-Francois and Biassou were to take over first and second command of the insurrection once underway. For some of the leaders, the paramount objective was to kill all of the Europeans and take possession of the colony. Others, however, sought merely to achieve changes in the conditions of the Maafa (slavery), such as prohibiting the use of the whip and obtaining three days off every week.

Of the four leaders, it was Boukman who was to give the signal for the revolt. Toussaint Louverture, who would emerge as the supreme leader of the revolution, was in close communication with Jean-Francois, Biassou, and Boukman, even as he remained on his plantation and did not officially join the ranks of the revolutionaries until nearly a month later. It was decided that upon a given signal, the plantations would be systematically set aflame and a general insurrection set afoot.

Painting of the cermony at Bwa Kayiman (Bois Caïman) by Ulrick Jean-Pierre.

Boukman was, reputedly, a vodun priest, and as such exercised considerable influence and command over his followers, who knew him as “Zamba” Boukman. He had been a commandeur and later coachman on the Clement plantation, which would be among the first plantation destroyed. Once they had agreed on the date, set for the 24th August 1791, the agreement was solemnized by a vodun ceremony held in a thickly wooded area known as Bwa Kyaiman (Bois-Caiman). Officiated by a priestess, Cecile Fatiman, a black pig was sacrificed and all the participants drank of the blood of the pig and swore to follow Boukman. One of the inducements to revolt was the concept that the souls of the dead would return to Africa.

That night Boukman gave a powerful speech; in essence, it was a call to arms:

“The Good Lord who created the sun which gives us light from above, who rouses the sea and makes the thunder roar–listen well, all of you–this god, hidden in the clouds, watches us. He sees all that the [whyte] man does. The god of the whyte man calls him to commit crimes; our god asks only good works of us. But this god who is so good orders revenge! He will direct our hands; he will aid us. Throw away the image of the god of the whytes who thirsts for our tears and listen to the voice of liberty which speaks in the hearts of all of us.”

On 16 August 1791, Blacks in the Limbé district, apparently due to a misunderstanding, were caught setting fire to an estate. A physical battle took place, and though wounded, they were arrested, put in irons and interrogated. During their interrogation, they reveal the war-plan and the names of the leaders. Interestingly, though, many of the enslavers who are warned of the uprising refuse to believe the rumors. One plantation manager, for example, “Offered his own head in exchange if the denunciations….proved true.”

According to C.L.R. James, “On the night of the 22nd a tropical storm raged with lightning and gusts of wind and heavy showers of rain. Carrying torches to light their way, the leaders of the revolt met in an open space in the thick forest of the Morne Rouge, a mountain overlooking Le Cap. At ten o’clock, the revolutionaries of the Flaville-Turpin estate in Acul, under the direction of one Auguste, deserted en masse to make their way to the Clement plantation, where they joined Boukman and combined their forces. They immediately set out to the Tremes estate; having narrowly missed the resident carpenter with their bullets, they took him prisoner and proceeded to the Noe plantation, where a dozen or so revolutionaries had already killed the refiner and his apprentice, as well as the manager. The only whytes spared were the doctor and his wife, whose service they thought would be valuable. By midnight the entire plantation was aflame and the revolution had effectively begun.”

To the sound of war-like drums and chants, armed with sticks and cutlasses, they went from plantation to plantation, gathering more warriors into their ranks. Within eight days, the revolutionaries had devastated seven parishes and completely destroyed 184 sugar plantations throughout the northern province. In less than month, the count rose to over 200, to which would be added nearly 1,200 coffee plantations. An early estimate placed the loss in productive value for the sugar plantations alone at nearly 40 million livres. Almost one thousand Europeans were slaughtered. By September, all the plantations within fifty miles either side of le Cap had been reduced to ashes and smoke; twenty-three of the twenty-seven parishes were in ruin, and the other four would fall in a matter of days…

The troop was divided into two large bands–one under Biassou, the other under Jean-Francois; while a third leader was Jeannot. However, Jeannot was executed by Jean-Francois. Boukman was killed, fighting bravely. His head was stuck up in Le Cap with a placard that stated: “This is the head of Boukman, chief of the rebels.”

A month after the revolt started Toussaint Louverture joined the band of Biassou. On account of his knowledge of herbs, Biassou appointed him Physician to the Armies of the King. Eventually, after a peace negotiation failed, he dropped the title and assumed the title of Brigadier-General and started to train an army.

Despite reinforcements from France, the area of the island held by the revolutionaries grew as did the violence on both sides. Before the fighting ended 100,000 of the 500,000 Blacks and 24,000 whytes were killed. Nonetheless, the revolutionaries managed to stave off both the French forces and the British who arrived in 1793 to conquer the island, and who withdrew in 1798 after a series of defeats by Loverture’s forces. By 1801 Loverture expanded the revolution beyond Haiti, conquering the neighboring Spanish colony of Santo Domingo (present-day Dominican Republic). He abolished the Maafa in the Spanish-speaking colony and declared himself Governor-General for life over the entire island of Hispaniola.

At that moment the Haitian Revolution had outlasted the French Revolution, which was claimed to be its inspiration. Napoleon Bonaparte, now the ruler of France, dispatched General Charles Leclerc, his brother-in-law, and 43,000 French troops to capture Loverture and restore both French rule and the Maafa.

Loverture was taken and sent to France where he died in prison in 1803.

Jean-Jacques Dessalines, one of Loverture’s generals assumed command of the revolutionaries, and at the Battle of Vertieres on November 18, 1803, the French forces were defeated.

On January 1, 1804, Dessalines declared the nation independent and renamed it Haiti. France became the first nation to recognize its independence. Haiti thus emerged as the first Black republic in the world, and the second nation in the western hemisphere (after the United States) to win its independence from a European power.

“The revolution started in 1791 and by 1803 not only had the Maafa (slavery) ended in Haiti but also French control over the island. ‘The struggle lasted for 12 years. The [enslaved Blacks] defeated in turn the local [whytes] and the soldiers of the French monarchy, a Spanish invasion, a British expedition of some 60,000 men, and a French expedition of similar size under Bonaparte’s brother-in-law. The defeat of Bonaparte’s expedition in 1803 resulted in the establishment of the [Black] state of Haiti which has lasted to this day.” –C.L.R. James

Source:
The Black Jacobins by C.L.R. James
The Making of Haiti by Carolyn E. Fick

Thank you for this beautiful blog

This is deep. I just shared this on my Facebook mainly to have access to it in the near future. I will bring this post up in conversations soon held.

Thank you for sharing this beautiful blog

I am so grateful for this extremely well researched and written blog!

I just email this article to myself for more indepth reading. Thank you so much.