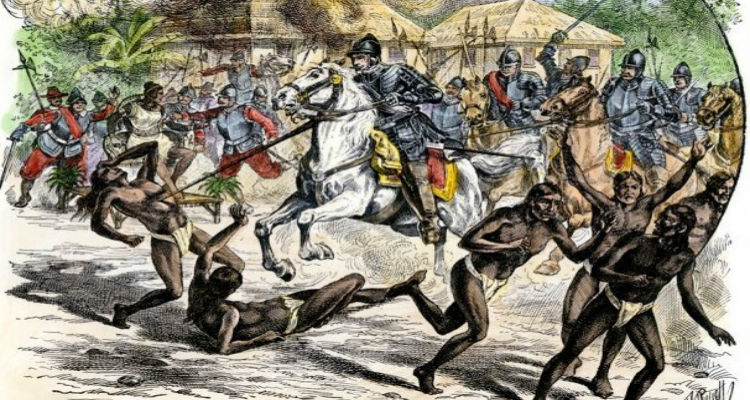 “The voyages of Columbus mark the starting point of world capitalism and the beginning of European colonial domination of the world.”~Dr. John Henrik Clarke

1. Columbus Day was established by an ivy, male-only Catholic organization known as the Knights of Columbus. They wanted a male Catholic role model they could look up to, so they pressured President F.D. Roosevelt into making it a federal holiday in 1937.

2. Columbus never set foot on the land that would become the United States of America. In fact, he never saw it.

3. His four voyages took him to the Caribbean, “a small detour to Central America and a hop to the north-east coast of Venezuela.” He had no idea the continent of North America existed. He thought he had found China, Japan and the region of King Solomon’s fabled gold mines.

4. On 3rd August 1492, Christopher Columbus sailed out of Palos de la Fontera on board his flagship the Santa Maria. Along with him were two other ships, the Pinta and the Nina. Exactly ten weeks later on 12 October he landed on “San Salvador,” a still unidentified island in the Bahamas. In October he also reached Cuba and on 6th December he had landed on the island of Haiti, which he renamed La Spanola (Hispaniola). This was how he described the people of the island: “they have no iron or steel or weapons, nor are they capable of using them, although they are well-built people of handsome stature. They are…free with all they possess that no one would believe it without seeing it. Of anything they have, if you ask them for it, they never say no; rather they invite the person to share it and show as much love as if they were giving their hearts and whether the thing be of value or of small price.”

5. On this first voyage he seized men and women and children to take back to Spain and parade like circus animals. Most died on the voyage and all were dead within six months. 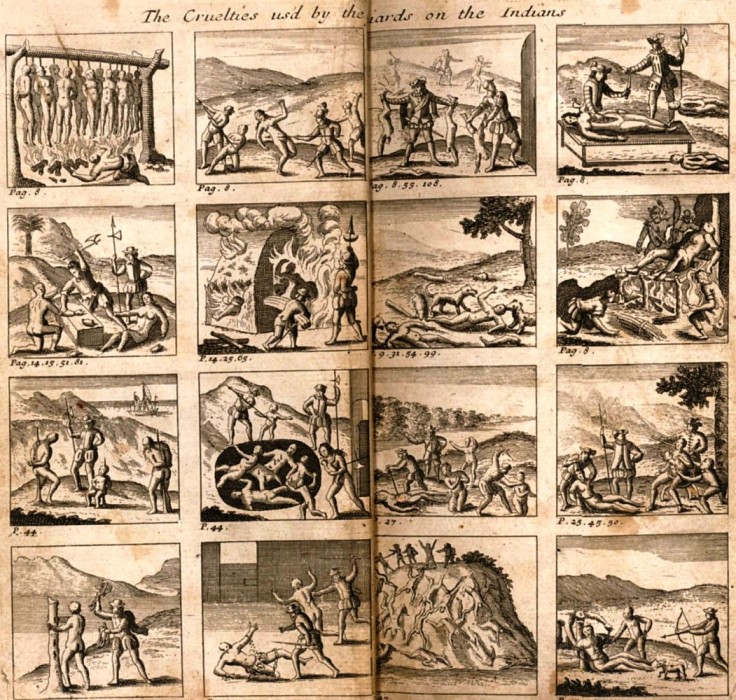 6. In 1493 Columbus returned with an invasion force of seventeen ships and as Viceroy and Governor of the Caribbean island, he immediately enslaved the people. Armed with the latest weaponry and armoured mastiffs trained to rip people apart, the Spanish tortured, maimed, raped, slaughtered, and burned the inhabitants in search of gold. Bartolomé de Las Casas, an eyewitness who eventually became a Dominican friar and fought for the Indians’ rights, left a harrowing description:

“…whenever the Spaniards found them, they pitilessly slaughtered everyone like sheep in a corral. It was a general rule among Spaniards to be cruel; not just cruel, but extraordinarily cruel so that harsh and bitter treatment would prevent Indians from daring to think of themselves as human beings or having a minute to think at all. So they would cut an Indian’s hands and leave them dangling by a shred of skin and they would send him on saying “Go now, spread the news to your chiefs.” They would test their swords and their manly strength on captured Indians and place bets on the slicing off of heads or the cutting of bodies in half with one blow. They burned or hanged captured chiefs…”

The Legacy of Christopher Columbus, A Short Account in Technicolor by LILI BERNARD

7. Columbus rewarded his lieutenants with sex slaves, particularly young girls who had been forced into sexual slavery. In a letter to a friend, he remarked upon how girls between the ages of nine and ten could be used as currency. “A hundred coins are easily obtained for a woman and there are plenty of dealers who go about looking for girls; those from nine to ten are now in demand.”

8. Columbus reported that when he reached Haiti, the Native Americans told him that Black-skinned people had come from the south and southeast in boats, trading spears. Other European explorers, including Vasco Nunez de Balboa also reported seeing or hearing of Blacks when they reached the Americas. 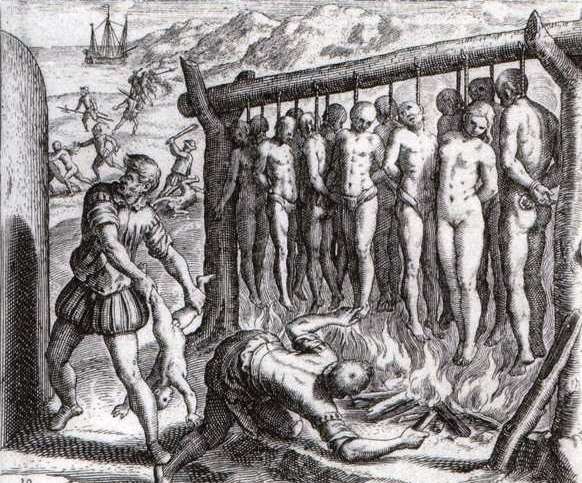 Indigenous people who showed any sort of resistance to Columbus and Spanish occupation were hung, mutilated or burned alive.

9. In the early years of Columbus’ conquests there were butcher shops throughout the Caribbean where Indian bodies were sold as dog food. There was also a practice known as the montería infernal, the infernal chase, or manhunt, in which Indians were hunted by war-dogs.

10. After a multitude of complaints against Columbus about his mismanagement of the island of Hispaniola, a royal commissioner arrested Columbus in 1500 and brought him back to Spain in chains. Though he was stripped of his governor title, he was pardoned by King Ferdinand, who then subsidized a fourth voyage.