W.C. Handy, born November 16, 1873 in Florence, Alabama, U.S, was an African American composer who changed the course of popular music by integrating the blues idiom into then-fashionable ragtime music. Among his best-known works is the classic “St. Louis Blues.” 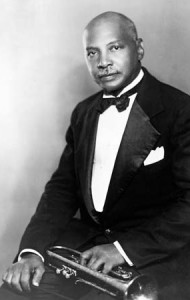 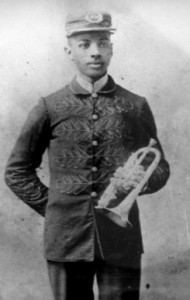 Handy was the son of former enslaved parents. His father was a preacher. An uncle, Whit Walker, was an ex-slave and a fiddler, one of the few jobs offering upward mobility on the plantation. There was lots of other music around Florence and Handy caught the bug early, learning cornet as a teenager and, by 19, was teaching music.

With natural leadership ability he was soon leading and contracting bands. He toured with Mahara’s Minstrels and performed at the 1893 Chicago World’s Fair, where the ragtime craze started, and toured all the way to Cuba, learning the Latin rhythms used in the tango section of “St. Louis Blues.”

By 1902, a married man nearing 30, Handy settled in Clarksdale, Mississippi. Today the city and it’s sister across the river, Helena, Arkansas, have produced more than their share of great Delta bluesmen and women, including Muddy Waters, John Lee Hooker, Sonny Boy Williamson and dozens more. When Handy settled there, it was simply a wealthy cotton town, Clarksdale society requiring orchestras for cotillions and other festivities.

Soon after arriving, Handy got his first taste of the blues, through a slide guitarist in a railroad station in nearby Tutwiler. In his groundbreaking 1941 autobiography “Father of the Blues,” Handy described “a lean, loose-jointed negro… plunking a guitar beside me… As he played he pressed a knife on the strings of the guitar in the manner popularized by Hawaiian guitarists who used steel bars.” He called it, “The weirdest music I had ever heard,” but added, “The tune did stay in my mind.”

At a dance, during his orchestra’s break, Handy heard a Mississippi stringband play a mix of country, ragtime and blues, making more from the crowd’s tossed coins than Handy’s group’s contract. Handy was soon arranging these tunes for his group, including “Make Me a Pallet on the Floor,” known among modern country blues fans through Mississippi John Hurt’s version.

Unable to find a publisher for the songs he was beginning to write, Handy formed a partnership with Harry Pace and founded Pace & Handy Music Company (later Handy Brothers Music Company).

Handy worked during the period of transition from ragtime to jazz. Drawing on the vocal blues melodies of African American folklore, he added harmonizations to his orchestral arrangements. His work helped develop the conception of the blues as a harmonic framework within which to improvise. With his “Memphis Blues” (published 1912) and especially his “St. Louis Blues” (1914), he introduced a melancholic element, achieved chiefly by use of the “blue” or slightly flattened seventh tone of the scale, which was characteristic of African American folk music. Later he wrote other blues pieces (“Beale Street Blues,” 1916; “Loveless Love”) and several marches and symphonic compositions. He issued anthologies of African American spirituals and blues (Blues: An Anthology, 1926; W.C. Handy’s Collection of Negro Spirituals, 1938; A Treasury of the Blues, 1949) and studies of black American musicians (Negro Authors and Composers of the United States, 1938; Unsung Americans Sung, 1944). His autobiography, Father of the Blues, was published in 1941.

As long as we rely on whyte historians to write Black history for us, we should keep silent about what they produce.