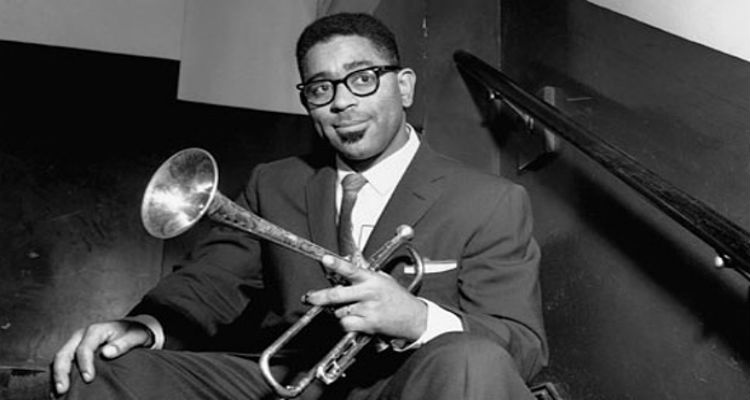 Dizzy Gillespie was one of the greatest jazz trumpeters of all time. In the 1940s Gillespie, with Charlie Parker, became a major figure in the development of bebop and modern jazz. In a nearly 60-year career as a composer, band leader and innovative player, Gillespie taught and influenced many other musicians, including trumpeters Miles Davis, Jon Faddis, Fats Navarro, Clifford Brown, Arturo Sandoval, Lee Morgan, Chuck Mangione, and balladeer Johnny Hartman. 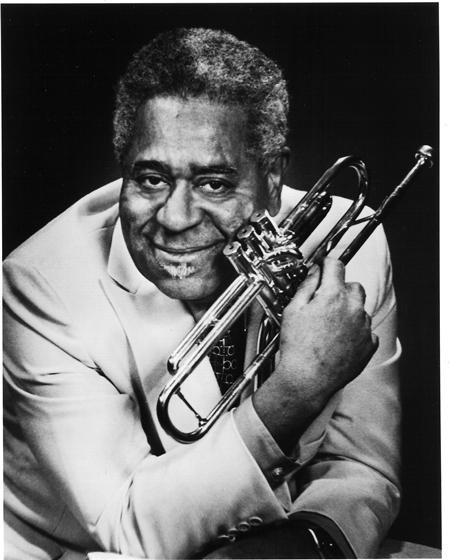 Gillespie was born John Birks Gillespie on October 21, 1917, in Cheraw, South Carolina, the youngest of nine children of James and Lottie Gillespie. His father – who died when Gillespie was only ten years old – was a local bandleader, so instruments were made available to the children. Gillespie started playing the piano at the age of four. He eventually taught himself how to play the trombone as well as the trumpet by the age of twelve. From the night he heard his idol, Roy Eldridge, play on the radio, he dreamed of becoming a jazz musician. He received a music scholarship to the Laurinburg Institute in North Carolina which he attended for two years before accompanying his family when they moved to Philadelphia. During his years there, he practiced the trumpet and piano intensively, still largely without formal guidance.

Gillespie’s first professional job was with the Frank Fairfax Orchestra in 1935, after which he joined the respective orchestras of Edgar Hayes and Teddy Hill, essentially replacing Roy Eldridge as first trumpet in 1937. Teddy Hill’s band was where Gillespie made his first recording, King Porter Stomp. According to legend, it was Teddy Hill who gave Gillespie his nickname because of his odd clothing style and his fondness for practical jokes.

Gillespie stayed with Teddy Hill’s band for a year, then left and free-lanced with numerous other bands. He eventually began experimenting and creating his own style which would eventually come to the attention of Mario Bauza, the Godfather of Afro-Cuban jazz who was then a member of the Cab Calloway Orchestra. In 1939, Gillespie joined Cab Calloway’s orchestra, one of the highest-paid Black bands in New York at the time. He recorded one of his earliest compositions, the instrumental Pickin’ the Cabbage, in 1940, with the band. Gillespie was fired after two years when he cut a portion of the Calloway’s buttocks with a knife after Calloway accused him of throwing spitballs (the two men later became lifelong friends and often retold this story with great relish until both of their deaths).

From 1937 to ’44, Gillespie performed with prominent swing bands, including those of Benny Carter and Charlie Barnet. He also began working with musical greats such as Ella Fitzgerald, Earl Hines, Jimmy Dorsey and Charlie Parker around this time. Working as a bandleader, often with Parker on saxophone, Gillespie developed the musical genre known as “bebop.”

By the early 1940s Black musicians had become frustrated by the fact that their whyte colleagues earned more money than they did. Spurred by the belief that their jazz had been shamelessly exploited by Europeans, Gillespie and his followers, notably the alto-saxophonist Charlie Parker, set out to play music so bewildering and complex that the whyte man would not be able to copy it.

In addition to creating bebop, Gillespie is considered one of the first musicians to infuse Afro-Cuban, Caribbean and Brazilian rhythms with jazz. His work in the Latin-jazz genre includes Manteca, A Night in Tunisia and Guachi Guaro, among other recordings.

Gillespie’s own big band, which performed from 1946 to ’50, was his masterpiece, affording him scope as both soloist and showman. Early in 1953, someone accidentally fell on Gillespie’s trumpet, which was sitting upright on a trumpet stand, and bent the bell back. Gillespie played it, discovered that he liked the sound, and from that point on had trumpets built for him with the bell pointing upwards at a 45 degree angle. The design is his visual trademark — for more than three decades he was virtually the only major trumpeter in jazz playing such an instrument. Gillespie’s best-known works from this period include the songs Oop Bob Sh’ Bam, Groovin’ High, Leap Frog, Salt Peanuts and My Melancholy Baby.

In 1956, after several years leading small groups, Gillespie formed another big band specifically to tour Iran, Lebanon, Syria, Pakistan, Turkey, Greece, and Yugoslavia on a cultural mission for the US State Department, and a few months later another sponsored tour to South America took place. He kept the band together for two years, but without government funding he was unable to keep such a large ensemble operational, and he returned to leading small groups.

Through the 1960’s and 70’s, Gillespie toured frequently sometimes with an electric bassist and a guitarist, sometimes with a more traditional group. And in 1974 he signed with Pablo Records and began recording prolifically again. He won Grammies in 1975 and 1980, and he published his autobiography, To Be or Not to Bop, in 1979.

In 1989 Gillespie gave 300 performances in 27 countries, appeared in 100 U.S. cities in 31 states and the District of Columbia, headlined three television specials, performed with two symphonies, and recorded four albums. He was also crowned a traditional chief in Nigeria, received the Ordre des Arts et des Lettres; France’s most prestigious cultural award. He was named Regent Professor by the University of California, and received his fourteenth honorary doctoral degree, this one from the Berklee College of Music. Gillespie also received the Kennedy Center Honors Award and the American Society of Composers, Authors, and Publishers Duke Ellington Award for 50 years of achievement as a composer, performer, and bandleader. In 1993 he received the Polar Music Prize in Sweden. Gillespie also starred in a film called The Winter in Lisbon (released in 2004).

Gillespie was survived by his widow, Lorraine Willis Gillespie (d. 2004); a daughter, jazz singer Jeanie Bryson; and a grandson, Radji Birks Bryson-Barrett. Gillespie had two funerals. One was a Bahá’í funeral at his request, at which his closest friends and colleagues attended. The second was at the Cathedral of Saint John the Divine in New York City open to the public.

With a strong sense of pride in his Afro-American heritage, Gillespie left a legacy of musical excellence that embraced and fused all musical forms, but particularly those forms with roots deep in Africa such as the music of Cuba, other Latin American countries and the Caribbean. Additionally, he left a legacy of goodwill and good humor that infused jazz musicians and fans throughout the world with the genuine sense of jazz’s ability to transcend national and ethnic boundaries–for this reason, Gillespie was and is an international treasure.

In 2014, Gillespie was inducted into the New Jersey Hall of Fame. He has a star on the Hollywood Walk of Fame at 7057 Hollywood Boulevard in the Hollywood section of the City of Los Angeles.

“Your life can’t go according to plan if you have no plan.”