Musical legend, Celia Cruz, was the best known and most influential female figure in the history of Cuban music. Cruz performed for more than five decades and recorded more than 70 albums, earning twenty-three gold records and had more than a dozen Grammy nominations. Her influential music career with several outstanding performances on screen, made Cruz the iconic “Latin Triple Threat.” Cruz was renowned internationally as the “Queen of Salsa”, “La Guarachera de Cuba”, as well as The Queen of Latin Music.

Celia Cruz was born Celia Caridad Cruz Alfonso on October 21, 1925, in a working-class neighborhood of Havana, Cuba, the second of four children. Her father, Simon Cruz, was a railroad stoker and her mother, Catalina Alfonso was a homemaker who took care of an extended family of fourteen. Cruz began singing at home to younger siblings and cousins. Even then, her voice was unusually rich, attracting the attention of neighbours. Despite her mother’s opposition and the fact that she was Catholic, as a child Cruz learned santería songs from her neighbor who practiced santería. Later, she would study the words to Yoruba songs with colleague Mercedita Valdes (an Akpwon santería singer) from Cuba and made various recordings of this religious genre. As a teenager, her aunt took her and her cousin to cabarets to sing, but her father encouraged her to attend school in the hope she would become a teacher. However, one of her teachers told her that as an entertainer she could earn in one day what most Cuban teachers earned in a month.

She began singing professionally on Cuban radio and in nightclubs in the late 1940s and studied music theory and voice at a music academy in Havana from 1947 to 1950. Her musical breakthrough came in 1950 when she became the lead singer of the popular orchestra La Sonora Matancera. When Myrta Silva, lead singer of the orchestra returned to Puerto Rico in August 1950, the band’s director, Rogelio Martinez, was quick to ask Cruz to replace her. The orchestra had the top-rating weekly show on Radio Progreso, and after some initial disgruntlement with the change of lead singer, listeners were won over by the new star.

Over the next 15 years, they collaborated on a number of legendary recordings, including Cao, cao maní picao, Bemba colorá, and Burundanga, and performed diverse Afro-Cuban music throughout the Caribbean, South America, and the U.S. Celia and La Sonora Matancera also appeared together in five motion pictures.Many recordings from this period have survived to bear witness to a phenomenon. Female singers were notoriously disparaged in Latin music, but the sheer power, abandonment and skill in improvising of Celia’s live performances were unique. 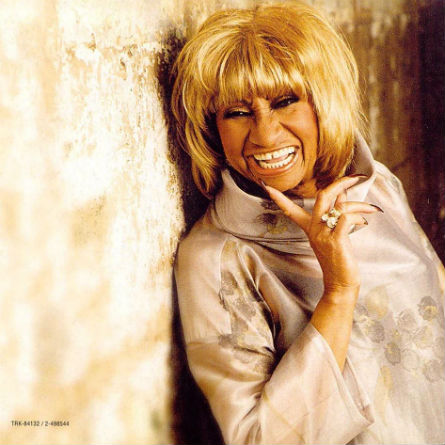 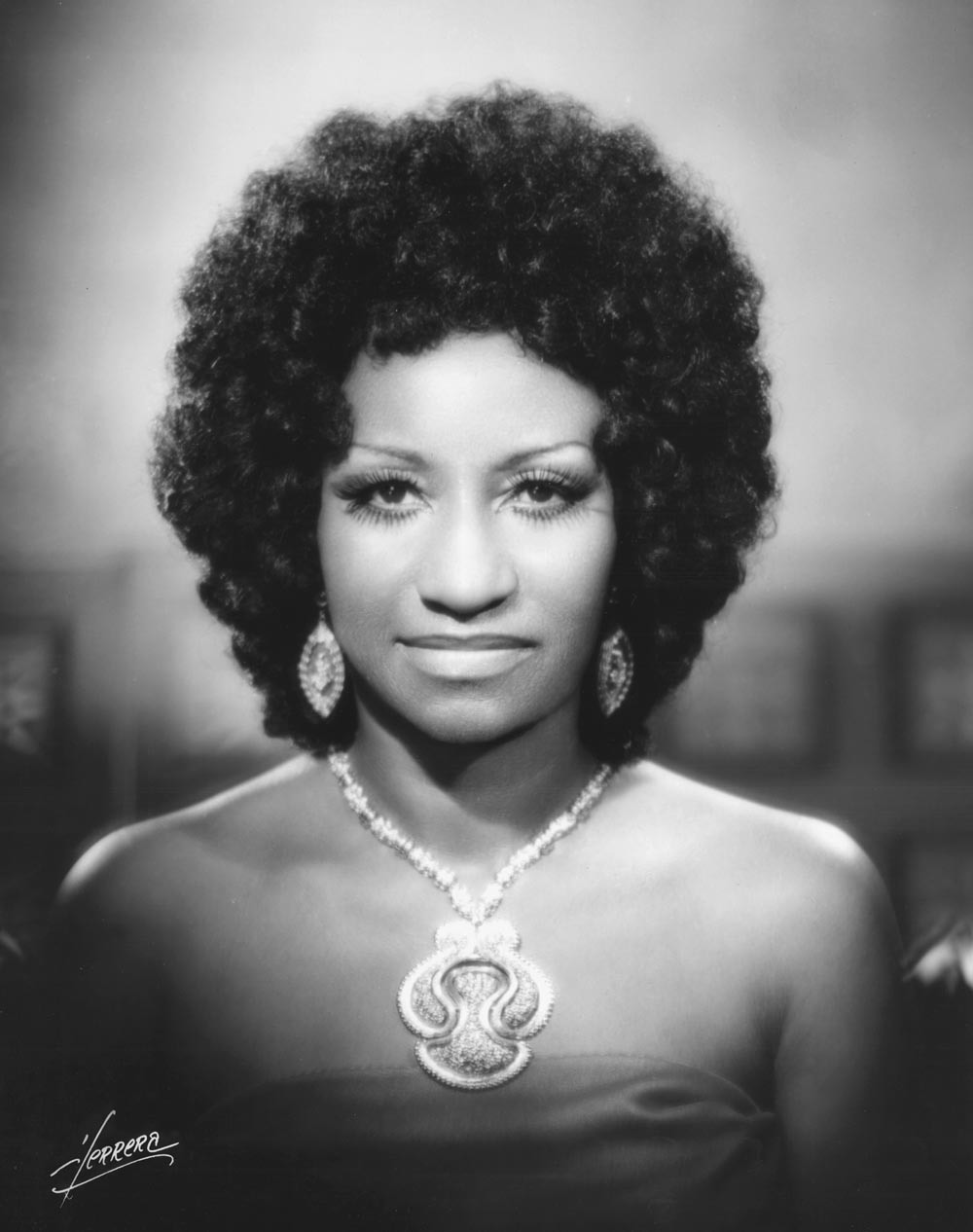 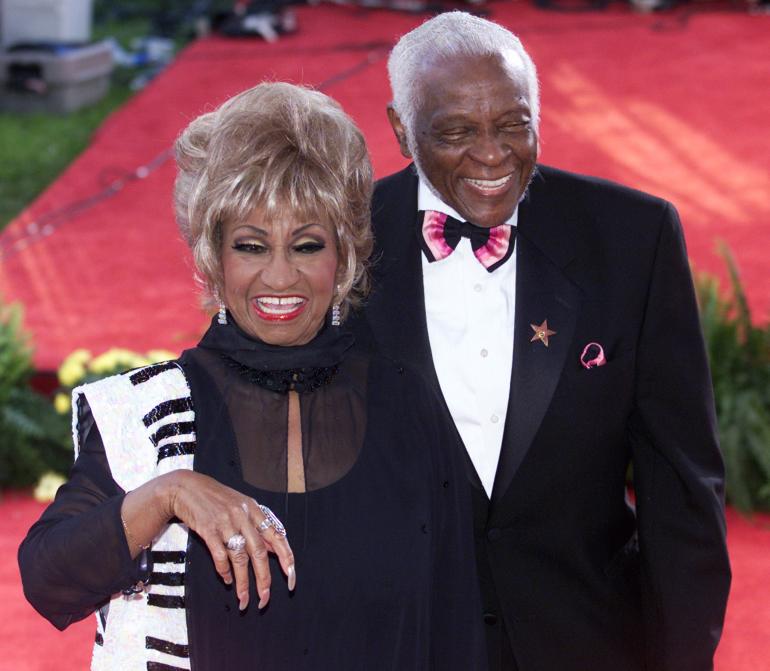 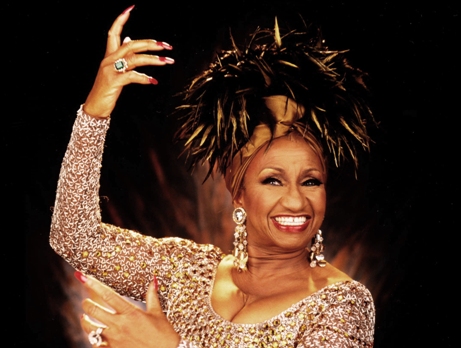 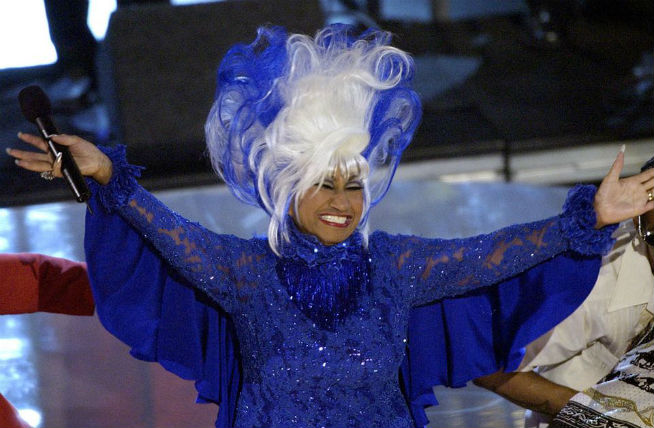 Following the Cuban revolution, Cruz moved to New York City in the early-1960s, where North American and Latin musicians were experimenting with a mix of rhythms, styles, and traditions that ultimately became known as salsa. In 1962 she married La Sonora Matancera trumpeter Pedro Knight and began a series of musical collaborations with Tito Puente, Johnny Pacheco, Willie Colón, Ray Barretto, and the Fania All Stars. Together these collaborations helped popularize the Latin sound in the United States and Europe.

With her powerful voice, energetic dancing, and charismatic personality, Cruz electrified her audiences. A virtuoso in the art of improvisational singing, she chose a repertoire that showcased her command of complex rhythms and melodies. Dressed in fantastic gowns and elaborate wigs, she would cry “¡Azúcar!” (“Sugar!” in Spanish) to evoke associations with Cuban culture and to energize her audiences.

Cruz’s partnership with orchestra leader, composer, and percussionist Tito Puente produced a number of albums from 1966 until 1973 and led to hundreds of joint performances. In 1973, Cruz played the role of Gracia Divina in the Latin opera Hommy at Carnegie Hall. More success followed when she teamed up with legendary bandleader Johnny Pacheco. Their 1974 album Celia y Johnny, which included one of the signature songs of salsa, Químbara, was one of 23 gold records she earned in her career.

During the mid-1970s, Cruz was the world’s best-known salsa singer. Over the next decade, as the “Queen of Salsa” continued to record and travel, her popularity was reflected in the enthusiasm of her audiences and the number of magazine polls in which she was voted “Best Female Latin Music Vocalist.”

In 1987, she was honored with a star on Hollywood’s Walk of Fame, and several years later, the city of Miami gave Calle Ocho, the main street of its Cuban community, the honorary name of Celia Cruz Way.

While always singing in Spanish, she continually reinvented herself, collaborating in the 1990s with non-salsa musicians such as David Byrne, Patti LaBelle, and hip-hop singer Wyclef Jean. Cruz also demonstrated her versatility by performing short dramatic roles in the films The Mambo Kings (1992) with Antonio Banderas and Armand Assante and The Perez Family (1995) with Marisa Tomei, and by appearing in two Mexican soap operas.

Cruz died on July 16, 2003, following a battle with brain cancer, two days after celebrating her 41st wedding anniversary. Hundreds of thousands of people celebrated her life at memorials in Miami and New York City.

Her legacy continues through the work of the Celia Cruz Foundation. Based in New York City, the non-profit organization was established in 2002 by Cruz to raise funds for cancer research and to provide scholarships for young Latino music students, and to keep the Celia Cruz legacy alive.