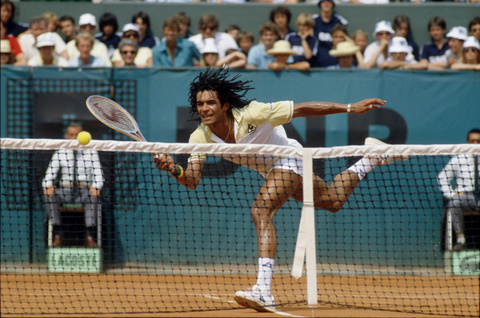 Yannick Noah, born May 18, 1960 is best remembered for winning the French Open in 1983 and as a highly successful captain of France’s Davis Cup and Fed Cup teams. During his tennis career, which spanned almost two decades, Noah captured a total of 23 singles titles and 16 doubles titles, reaching a career-high singles ranking of World No. 3 (in July 1986) and attaining the World No. 1 doubles ranking the following month. 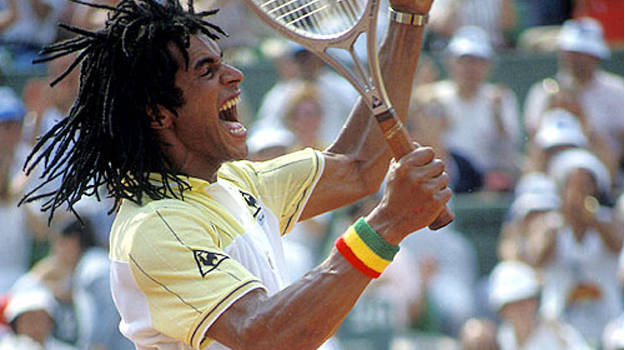 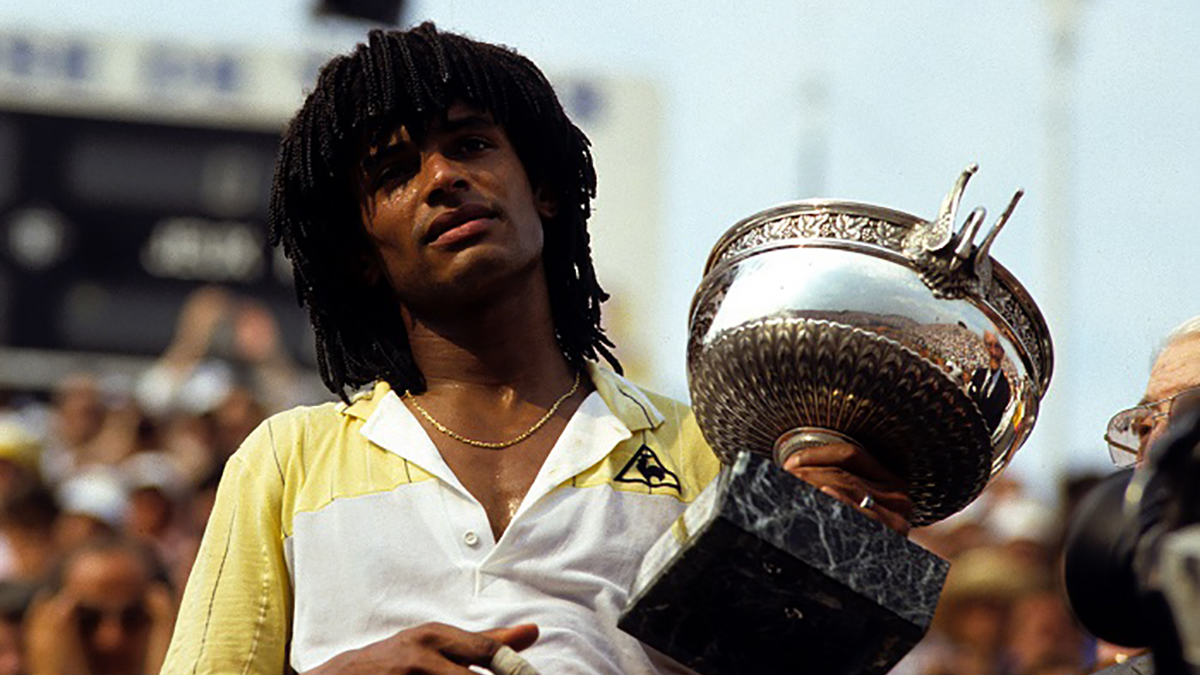 Born in the North of France, Noah is the son of a Cameroonian soccer player, Zacharie Noah, and his French wife Marie-Claire. After a sports injury in 1963, Noah’s father returned to Africa with his family. There Yannick made his debut in tennis and soon showed an amazing talent that eventually brought him to the French Tennis Federation’s training center in Nice in 1971, after Black-American tennis legend Arthur Ashe discovered him while he was playing a tournament in Africa. Six years later Yannick Noah won his first victory in the Wimbledon junior category and became professional the next year.

By 1980 Noah was ranked the Number One player in France after a series of Grand Prix titles and impressive showings in Grand Slam tournaments. Negative press regarding his confession of smoking hashish periodically—as well as his charge that other athletes used stronger drugs to improve their play—undermined his confidence.

He struggled the next year, but his form returned when he won the French Open in 1983. Suddenly a French celebrity, Noah moved to New York to avoid the harrowing publicity in France. He recuperated from injuries and the loss of his grandfather, a village chief who was murdered during a political coup in Cameroon, playing infrequently in 1984. Strengthened by his rest, Noah won the Italian Open in 1985. Although he reached the finals of many tournaments in the intervening years and was ranked fifth in the world in 1987, Noah failed to win the more prestigious titles, including another French Open.

Marital woes and injury plagued Noah during the late 1980s. Wed to Swedish model Cecilia Rodhe in 1984, Noah divorced her three years later after the births of his son, Joachim, and daughter, Tara. He suffered many defeats, including his loss to John McEnroe in the second round of the 1989 Davis Cup. Noah divulged about McEnroe in the New York Times, “He played very, very well. What can I say? It was very difficult. My knees were fine. I don’t even have that excuse.”

Despite his athletic prowess, Noah did not advance beyond the quarterfinals in Grand Slam tournaments throughout most of the 1980s. The New York Times stated in 1989, “Yannick Noah has always entertained tennis fans with his flamboyant style of play. His physical ability on sky-high overheads, diving volleys and thunderous serves has always made him stand out on the court. But he has been a bit of an enigma in his years on the circuit.” In the U.S. Open that same year, Noah, ranked 23rd in the world, was defeated by Boris Becker in yet another quarterfinal.
His malady of seesawing in and out of retirement at the end of the 1980s afflicted Noah into the 1990s. His coach, Dennis Rolston, predicted that if Noah did not improve his training regimen and confront his ambivalence toward the game, he would reach a crisis decision. Noah continued playing, though, capturing the title of captain of the French Davis Cup team the next year.

In his debut as captain of France’s Davis Cup team, Noah startled the tennis world when he announced on November 28, 1991, that he would play only if another team member was injured. A defending champion who played in the Davis Cup final in Grenoble in 1982 and the Davis Cup quarterfinal in San Diego in 1989, Noah selected Guy Forget and Henri Leconte to lead the team. He explained in the New York Times, “The emotions are still there, but I don’t feel like I’m the one who must hold the racquet. I believe the players we have are good enough to win.” Under Noah’s tutelage, Guy Forget spurred the team to take the Davis Cup on December 1, 1991, when he defeated Pete Sampras three sets to one. With great emotion, Noah joined the team on the courts of Lyon, France, when they celebrated their victory.

After viewing television reports of disturbances between security officers and antiapartheid demonstrators at the world doubles championships in Johannesburg, South Africa, Noah made news again in 1991 when he decided to boycott tennis matches in that country. Although South Africa had just been allowed re-entry into international sports at the beginning of the decade, Noah was quoted by Jet as saying, “Frankly, I can’t see myself going there as a player or as captain of France’s Davis Cup team. I would have the feeling of being used.”

Noah was inducted into the International Tennis Hall of Fame in 2005. He remains France’s highest ranked player since the introduction of rankings in 1973.

Since retiring from playing tennis, Noah has developed a career as a popular singer, performing throughout Europe. He began his music career in 1991 with the album Black or What, featuring the popular track “Saga Africa,” which he made the stadium sing with his players after the famous Davis Cup final win. In 1993, he released the album Urban Tribu with the successful single “Get on Back,” followed by the album Zam Zam in 1998.
With the encouragement of his manager Jean-Pierre Weiller, his musical career got a great boost in 2000 with his self-titled 4th album Yannick Noah, written by Erick Benzi and Robert Goldman. The single “Simon Papa Tara” written by Robert Goldman. The album also contained songs by Bob Marley and the group Téléphone. In 2003, Noah released Pokhara that sold 1,295,000 copies in France.

In October 2006, the album Charango was a major hit, selling 1,275,000 copies in France and culminating in a one-year tour to promote the album. French radio played the singles “Donne-moi une vie” and “Aux arbres citoyens” from the album extensively.

In 2010, Yannick made a comeback with the release of Frontières, his eighth album, containing the single “Angela”, a tribute to Angela Davis. It also contained a duet with Aṣa in “Hello”. On September 25 2010, he filled the Stade de France for an exceptional concert that was attended by close to 80,000 spectators.

Noah is also very active in charity work, having created ‘les Enfants de la Terre’ in 1988 with his mother and also ‘Fête le Mur’, a tennis association for underprivileged children.