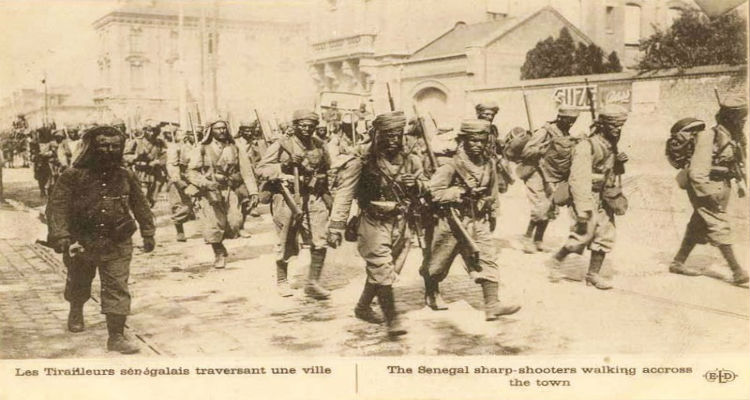 The first Senegalese Tirailleurs were formed in 1857 by Louis Faidherbe, governor general of French West Africa, because he lacked sufficient French troops to control the territory and meet other requirements of the first phase of colonisation. The formal decree for the formation of this force was signed on 21 July 1857 in Plombières-les-Bains by Napoleon III. The Senegalese Tirailleurs served France in a number of wars, including World War I and World War II. Other tirailleur regiments were raised in French North Africa from the Arab and Berber populations of Algeria, Tunisia and Morocco, collectively they were called Tirailleurs Nord-Africains or Turcos. Tirailleur regiments were also raised in Indochina, they were called Vietnamese, Tonkinese or Annamites Tirailleurs.

From 1857 to 1905 the Senegalese Tirailleurs was primarily a mercenary force composed of former enslaved men bought from West African slave-owners, prisoners of war, and African men from low social ranks; although a small group of well-born Africans served as intermediaries. Subsequent recruitment was either by voluntary enlistment or on occasion by an arbitrary form of conscription.

The creation of the West African Federation in 1905 initiated the transition from military to civilian rule, but increasing numbers of African troops were needed in this period for policing, fighting resistance forces, and as garrison troops. The Senegalese Tirailleurs also participated in the conquest of Morocco in the early 1900s.

With the start of World War I, many Senegalese Tirailleurs soldiers were brought to the front in France and served in several important battles, like Vimy Ridge and Somme. They were also for a time amalgamated with African American soldiers in the trenches. French West African troops serving in World War I comprised about 170,891 men, and approximately 30,000 of them were killed. In Senegal alone more than 1/3 of all males of military age were mobilized.

Following World War I, the Conscription Law of 1919 in French West Africa called for universal male conscription in peacetime as well as wartime. Hundreds of thousands served in the Senegalese Tirailleurs in colonial wars in this time period and in reserves and labor brigades.

During World War II France once again used the Senegalese Tirailleurs troops, this time in even greater numbers. In 1940, African troops comprised roughly 9% of the French army. The French recruited more than 200,000 Africans during the war. Approximately 25,000 were killed in battle. Many were also interned in German labor camps and thousands of African Prisoners of War (POWs) were murdered by the Wehrmacht in 1940. In contrast to World War I, African troops were integrated into French military units. But when victory was close for the Free French forces de Gaulle ordered a “whitening” of the troops and replaced 20,000 Africans at the front with whyte Frenchmen.

After French liberation, African servicemen were grouped in French centers to await the journey back home. However, they faced discriminatory treatment, and shortages of food, shelter, and other resources. In December of 1944 a protest at a camp in Thiaroye in Senegal involving the first group of ex-POWS to be sent back to West Africa resulted in 35 Africans killed, hundreds wounded, and many sentenced to jail terms. This protest, sometimes known as the “Thiaroye Massacre,” stemmed from French mistreatment and failure to provide back pay.

Following World War II, a series of veterans organizations were formed that demanded equal rights. Many played important roles in Senegalese nationalist movements. The Tirailleurs Senegalais controversially participated in the French counterinsurgency war in Algeria in the 1950s, although some troops protested the involvement. Léopold Sédar Senghor, who in 1960 became the first President of independent Senegal, had served in the Tirailleurs Senegalais and was a POW during WWII.

From 1857 to 1889 the Senegalese Tirailleurs wore a dark blue zouave style uniform with yellow braiding which was replaced by a loose fitting dark blue tunic and trousers worn with a red sash and chechia fez. White trousers were worn in hot weather and a light khaki drill field dress was adopted in 1898. Senegalese units sent to France in 1914 wore a new dark blue uniform introduced in June that year beneath the standard medium blue greatcoats of the French infantry. This changed to sky-blue in 1915 and then the universal dark khaki of French overseas forces the following year. Throughout these changes the distinctive yellow cuff and collar braiding was retained, together with the fez (worn with a drab cover to reduce visibility). Until World War II the Tirailleurs Sénégalais continued to wear the khaki uniforms described in either heavy cloth or light drill according to conditions. In subsequent campaigns they wore the same field uniforms as other French units, usually with the dark blue forage cap of the infanterie coloniale. The red fez survived as a parade item until the 1950s.