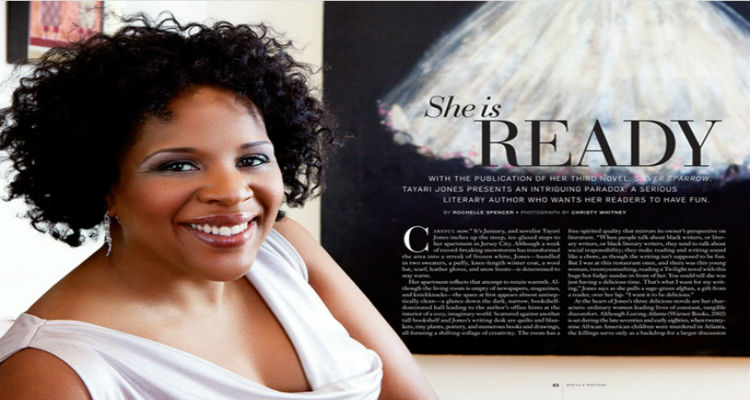 Tayari Jones (born 30 November 1970) is an award-winning African-American author of four novels. Her latest novel, An American Marriage, won the 2019 Women’s Prize for Fiction (formerly known as the Orange Prize), Aspen Words Prize and an NAACP Image Award. Jones, a member of the Fellowship of Southern Writers, has also been a recipient of the Hurston/Wright Legacy Award, United States Artist Fellowship, NEA Fellowship, and Radcliffe Institute Bunting Fellowship.

Jones is a graduate of Spelman College, University of Iowa, and Arizona State University. She is an Andrew D. White Professor-at-Large at Cornell University and the Charles Howard Candler Professor of Creative Writing at Emory University.

Jones’ first novel, Leaving Atlanta (2002), is a coming-of-age story set during the city’s infamous child murders of 1979-81. Leaving Atlanta has received several awards and accolades including the Hurston/Wright Award for Debut Fiction. It was named “Novel of the Year” by Atlanta Magazine and “Best Southern Novel of the Year,” by Creative Loafing Atlanta. The Atlanta Journal Constitution and The Washington Post both listed it as one of the best of 2002.

Her second novel, The Untelling (2005), paints a vivid, unforgettable portrait of a woman seeking to overcome the trauma of her past. It was awarded the Lillian C. Smith Award for New Voices by The Southern Regional council and the University of Georgia Libraries.

Silver Sparrow, her third novel, published in 2011, unveils a breathtaking story about a man’s deception, a family’s complicity, and the teenage girls caught in the middle. Silver Sparrow was chosen by the Black Caucus of the American Library Association as an Honor Book. It was also nominated for an NAACP Image Award and the 2013 IMPAC Dublin International Literary Award.

An American Marriage (2018), her latest novel, is “a moving portrayal of the effects of a wrongful conviction on a young African-American coupl.” An American Marriage was a 2018 Oprah’s Book Club Selection and won the 2019 Women’s Prize for Fiction. Winfrey has also announcedthat she is producing a film adaptation of the book. President Barack Obama included An American Marriage on his summer 2018 reading list.

Thanks for subscribing! Please check your email for further instructions.
next post