Serena Williams is the African American tennis player who has revolutionized women’s tennis with her powerful style of play, becoming one of the game’s most dominant athletes in the early 21st century. 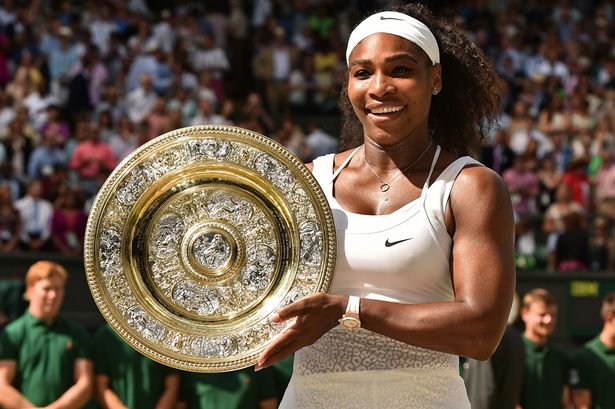 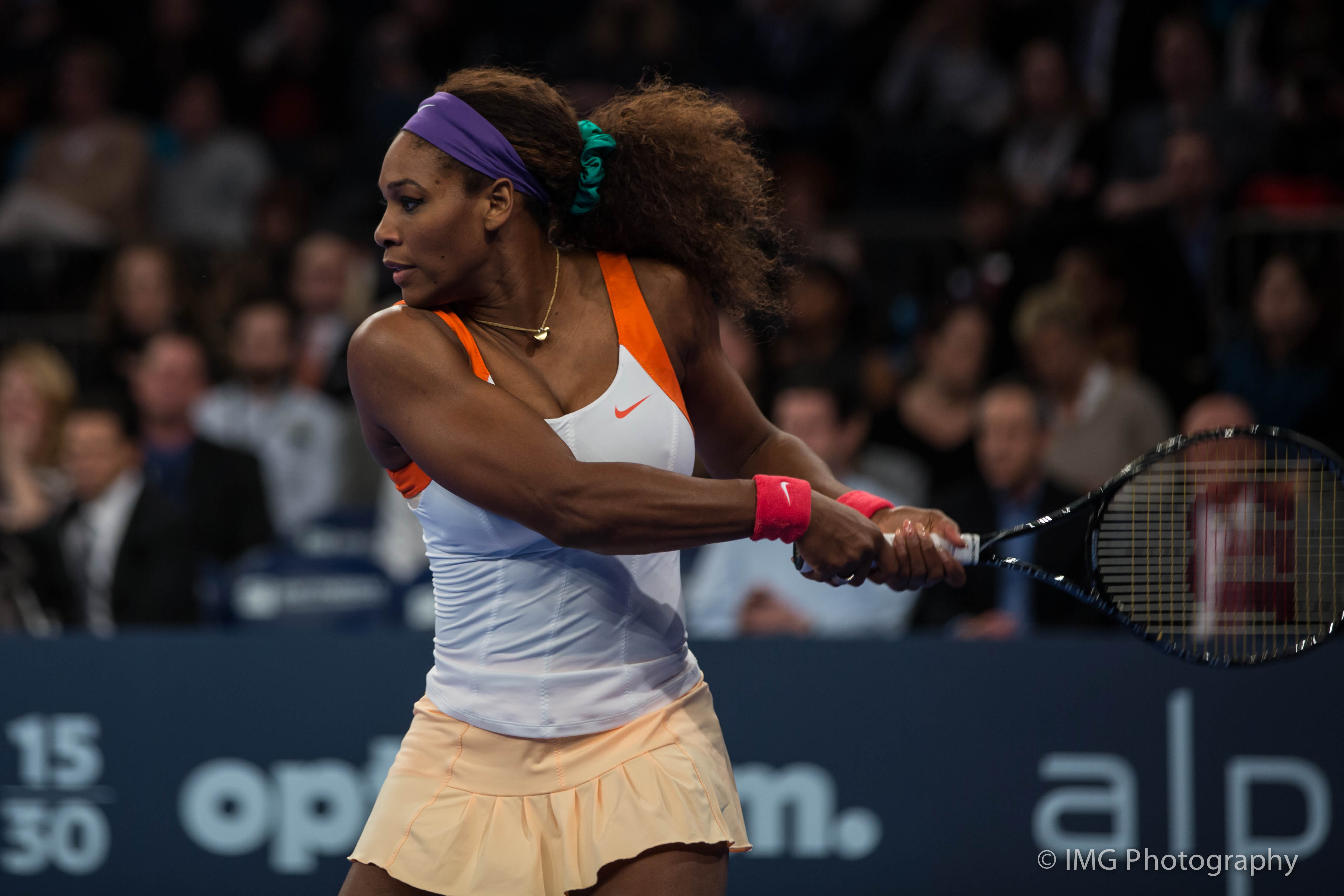 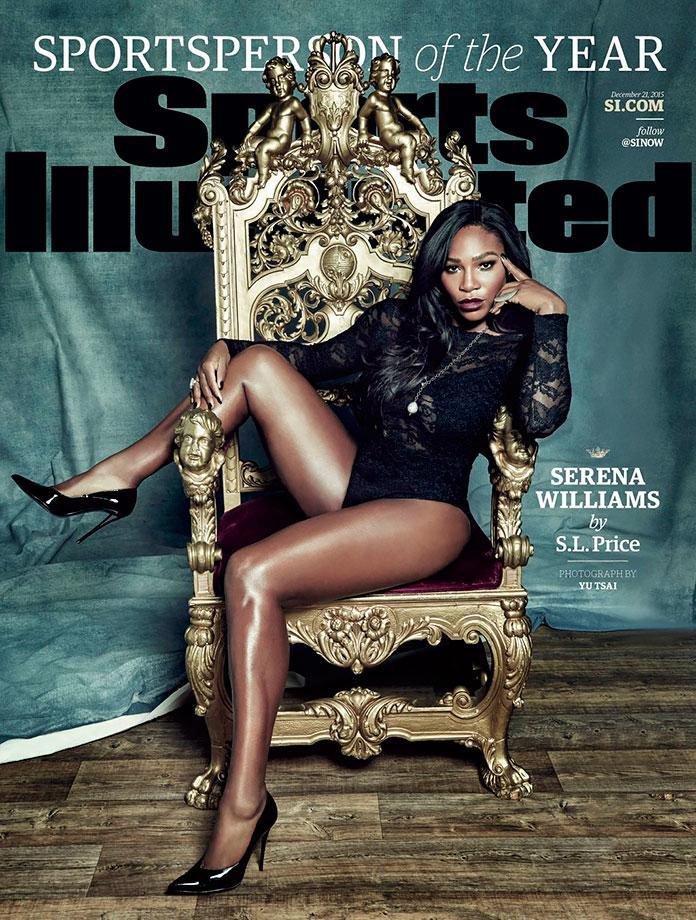 Serena Williams was born in Saginaw, Michigan, on September 26, 1981, but she and her sister were raised in the Los Angeles suburb of Compton. Her father, Richard Williams, ran a private security firm, and her mother, Oracene (who often uses the name Brandy), was a nurse. A fan of televised tennis, Richard Williams dreamed of the opportunities that might await his offspring-to-be: “I went to my wife and said, ‘Let’s have kids and make them tennis players,’” he told Newsweek. Venus, born in 1980, and Serena, the youngest daughter, showed promise from the start. “Venus and Serena took to tennis as soon as rackets were put in their hands,” older sister Lyndrea told Sport magazine.

The sisters’ early training took place on public tennis courts in and around Compton. Despite a difficult beginning, their skills developed rapidly. Serena entered her first tournament at the age of four and a half, and over the next five years, her father has claimed, she won 46 of 49 tournaments she entered. She succeeded Venus as the number-one player in southern California’s highly competitive age-12-and-under rankings, and well before reaching adolescence both sisters had attracted national attention in the form of invitations to prestigious tennis camps, promises of lucrative product-endorsement deals, and glowing newspaper reportage.

In 1991 Richard Williams, who managed and coached both Serena and Venus, made the first of several unorthodox moves in regard to his daughters’ career: he decided that they should enter no more tournaments on the national junior circuit. Junior tournaments are the usual path to stardom for young tennis players, so Serena’s development as a player took place to some degree in isolation from her peers. Richard Williams has said that he hoped to avoid subjecting his daughters to competitive pressures, including an undertone of racial hostility.

Serena and Venus were sent to the Florida tennis academy of teaching pro Ric Macci, who had also worked with teenage standouts Jennifer Capriati and Mary Pierce, and thanks to Richard’s canny handling of a clothing endorsement deal, the family was able to move to a rambling estate in Palm Beach Gardens, Florida. In 1993 both girls left school and continued their education at home.

After raising eyebrows by pulling his daughters out of the junior circuit, Richard Williams once again stirred talk in the tennis world by allowing them to turn professional at the age of 14. Still banned from World Tennis Association (WTA) events at that age, Williams made her professional debut in October of 1995 at the non-WTA Bell Challenge in Vanier, Quebec, Canada, losing in less than an hour to a virtual unknown. But her father, who has defenders as well as critics on the tennis circuit, offered constant encouragement, and the play of both sisters improved dramatically. “Nobody knows those girls better than their parents—the road they’ve gone on couldn’t have been better selected,” legendary coach Nick Bollettieri told Newsweek. Williams took 1996 off, playing in neither WTA nor non-WTA events. Her father felt that she needed more training to develop and he was also working on Venus’s professional career as well.

Williams’ first professional match in the WTA was in Moscow in 1997 where she was taken out in the first round by a highly ranked player. Many critics claimed that she did not have the talent of her older sister, who was slowly climbing the ranks of the WTA, but that perception was soon to change. Williams qualified for an Ameritech-sponsored tournament in Chicago where she was slated to face Mary Pierce, who was ranked number seven in the world, in the second round. She staged a stunning upset over Pierce, beating her in only two sets. This advanced her to the quarter finals where she faced an even more difficult opponent, fourth-ranked Monica Seles. At first it seemed that Williams had given her all in the match against Pierce as she dropped the first set to Seles. Then, in a shocking turn of events, Williams rallied and won the next two sets, defeating Seles. The critics who had said that she showed little promise only a few weeks before now spoke of her as the next rising WTA star, which was reflected in her ranking, which jumped from 304 to 102 after the tournament. She would finish 1997, her first full season with the WTA, with a ranking of 99.

By the following year her world ranking had risen as high as number 21, and both Williams and her sister, Venus, were bona-fide celebrities. She served notice that her time had come when she advanced to the semifinals of a Sydney, Australia tournament by beating the then third-ranked woman in the world, Lindsay Davenport, who went on to become the United States Open champion that year. Expected to do well in her first “Grand Slam” tournament, the Australian Open, she had the bad luck of having to face her sister in the second round after ousting ninth-ranked Irina Spirlea in the first round.

Venus emerged victorious, and Essence magazine reported that she was heard to say, “I’m sorry I had to take you out, Serena,” as the two sisters walked off the court. This was the first time that the public caught a glimpse of the relationship between the two sisters and how they work not only to be the best for themselves, but also to motivate each other. “They haven’t admitted to it, but there’s definitely a competitiveness between Serena and Venus,” former U.S. Open finalist Pam Shriver told Sport. “They motivate each other and feed off each other’s successes. Venus’ jump to a No. 10 ranking has definitely inspired Serena to improve her ranking,” she continued. The sisters met again that year in the Italian Open this time in the quarter finals where once again Venus took the victory.

1998 continued to be an excellent year for Williams as she continued to succeed beyond expectations. She began to play in doubles play and won two other doubles titles that year with Venus in Oklahoma City and Zurich. Her victory in Oklahoma City became Williams’ first pro title in doubles, but it would not be her last. She also went on to win two mixed double titles at Wimbledon and the U.S. Open with partner Max Mirnyi.

1999 was a watershed year for Williams as it would be the one in which she won her first singles title as well as a Grand Slam tournament. Ranked number 21 at the beginning of the season, her first single title came at the Paris Indoor tournament where she defeated Amelie Mauresmo in three sets. From there she went on to win Indian Wells where she plowed through Lindsey Davenport, Mary Pierce, and number seven ranked Steffi Graf to gain her victory. Williams was on a 16-match win streak when she met up with Venus again in the finals of a tournament in Miami, defeating Seles, Coetzer and number one ranked Martina Hingis in straight sets. While she did lose to her sister again, Williams did crack the top ten of the rankings for the first time, becoming the ninth best player in the world.

Williams’ biggest match of the year, however, came when she entered the U.S. Open. Her road to the finals took her through fourth-ranked Seles and second-ranked Davenport, and once she had defeated them, she had to face number one ranked Hingis. But when the final match was over, Williams had won her first Grand Slam tournament in record setting fashion. She became the lowest seeded player to ever win the title as well as the second African-American woman to win a Grand Slam title. The only thing Williams had not done yet was to beat her sister Venus, and that happened later that year where the sisters met in the finals of the Grand Slam Cup. It seemed that nothing could stop Williams and that she was poised to take over the world of women’s tennis.

At the 2000 Olympic Games in Sydney, Australia, Serena and Venus won gold medals in the doubles event. After several years of inconsistent play, Serena asserted herself in 2002 and won the French Open, the U.S. Open, and Wimbledon, defeating Venus in the finals of each tournament. Known for her fierce tenacity, Serena won the Australian Open in 2003 and thus completed a career Grand Slam by having won all four of the slam’s component tournaments. Later that year she was also victorious at Wimbledon; both of her Grand Slam wins in 2003 came after she had bested her sister in the finals. In 2005 Serena won the Australian Open again. Beset by injury the following year, she rebounded in 2007 to win her third Australian Open. Serena and Venus won their second doubles tennis gold medal at the 2008 Olympic Games in Beijing. Later that year Serena won the U.S. Open for a third time. In 2009 she captured her 10th Grand Slam singles title by winning the Australian Open. Later that year she won her third Wimbledon singles title, once again defeating her sister. Serena defended her titles at the Australian Open and Wimbledon in 2010. She subsequently battled various health issues that kept her off the court for almost a year.
In 2012 she captured her fifth Wimbledon singles title. A month later at the London Olympic Games, Serena won a gold medal in the singles event, becoming the second woman (behind Steffi Graf) to win a career Golden Slam. She also teamed with Venus to win the doubles event.

Off the court, fashion and acting are Serena’s passions. Serena’s acting credits include an appearance on “Drop Dead Diva”; a role as an ex-gangster on Showtime’s “Street Time”; and a leading role on an episode of Lifetime’s “The Division.” Serena has also lent her vocal talents to “The Simpsons” and Disney’s “Higgleytown Heroes.” She was also featured among 10 individuals named “Fashion Trendsetters” by Vogue Magazine on a VH1/Vogue Television Special. Serena has used her fashion savvy to create her own clothing label, Aneres, which has been featured in In Style Magazine. You can also find Serena on HSN where her Serena Williams Signature Statement collection is featured. Her most recent line premiered at New York Fashion Week on September 9, 2014. In 2011, Serena’s passion for nails came to fruition when she partnered with OPI to create her Glam Slam Series, an assortment of colors inspired by the tennis and fashion icon.

The Serena Williams Fund focuses on creating equal access to education and assisting victims of senseless community violence. To that end, The Serena Williams Fund partners with organizations and leaders doing great work to positively impact communities and the lives of other human beings both nationally and globally. This has included building schools in Kenya, serving as a UNICEF Global Ambassador, Creating the Serena Scholars to help deserving students with unmet financial need in the US attend college, partnering with the Equal Justice Initiative to raise funds and awareness for the great work they do to name a few.

You are your best thing.