Pelé is considered by many to be the greatest football (soccer) player of all time. Pelé scored 1281 goals in 1363 games, including unofficial friendlies and tour games, for which he was listed in the Guinness World Records for most career goals scored in football. During his playing days, Pelé was for a period the best-paid athlete in the world. In his native Brazil, he is hailed as a national hero for his accomplishments in football and for his vocal support of policies to improve the social conditions of the poor. When he scored his 1,000th goal he dedicated it to the poor children of Brazil. In 1961, Brazil President Jânio Quadros had Pelé declared a national treasure. During his career, he became known as “The Black Pearl” (A Pérola Negra), “The King of Football” (O Rei do Futebol), “The King Pelé” (O Rei Pelé) or simply “The King” (O Rei). A member of three Brazilian World Cup-champion teams, in 1999, he was voted: “Football Player of the Century” by the International Federation of Football History & Statistics (IFFHS); and “Athlete of the Century” by the International Olympic Committee and Reuters News Agency. 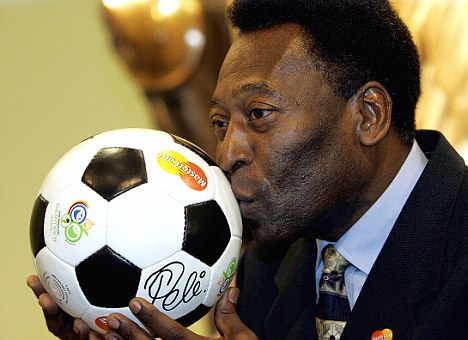 Pele was born Edson Arantes do Nascimento on 21 October 1940 in Três Corações, Brazil. However, Pelé himself claims that he was born on 23 October. Pelé was the first child of João Ramos and Dona Celeste. Named after Thomas Edison and nicknamed “Dico,” Pelé moved with his family to the city of Bauru as a young boy. The origin of the “Pelé” nickname is unclear, though he recalled despising it when his friends first referred to him that way.

His father, better known as “Dondinho,” struggled to earn a living as a soccer player, and Pelé grew up in poverty. Taught to play by his father, he could not afford a proper football and usually played with either a sock stuffed with newspaper and tied with a string or a grapefruit.

In 1956, de Brito took Pelé to Santos, to try out for professional club Santos FC, telling the directors at Santos that the 15-year-old would be “the greatest football player in the world.” Pelé impressed Santos coach Lula during his trial at the Estádio Vila Belmiro, and he signed a professional contract with the club in June 1956. Pelé was highly promoted in the local media as a future superstar. He made his senior team debut on 7 September 1956 at the age of 15 against Corinthians Santo Andre and had an impressive performance in a 7–1 victory. Pelé scored the first of his record 1281 goals in football during the match. He led the league in goals in his first full season. Ten months after signing professionally, Pele was called up to the Brazil national team.

The world was officially introduced to Pelé in the 1958 World Cup in Sweden. Displaying remarkable speed, athleticism and field vision, the 17-year-old erupted to score three goals in a 5-2 semifinal win over France, then netted two more in the finals, a 5-2 win over the host country.

The young superstar received hefty offers to play for European clubs, and Brazilian President Jânio Quadros eventually had Pelé declared a national treasure, making it legally difficult for him to play in another country. Regardless, Santos club ownership ensured its star attraction was well paid by scheduling lucrative exhibition matches with teams around the world.

“I arrived hoping to stop a great man, but I went away convinced I had been undone by someone who was not born on the same planet as the rest of us.” —Benfica goalkeeper Costa Pereira following the loss to Santos in 1962.

Pelé aggravated a groin injury two games into the 1962 World Cup in Chile, sitting out the final rounds while Brazil went on to claim its second straight title. After the 1962 World Cup, wealthy European clubs such as Real Madrid, Juventus and Manchester United tried to sign him, but the government of Brazil declared Pelé an “official national treasure” to prevent him from being transferred out of the country.

Four years later, in England, a series of brutal attacks by opposing defenders again forced him to the sidelines with leg injuries, and Brazil was bounced from the World Cup after one round.

Despite the disappointment on the world stage, the legend of Pelé continued to grow. In the late 1960s, the two factions in the Nigerian Civil War reportedly agreed to a 48-hour ceasefire so they could watch Pelé play in an exhibition game in Lagos.

The 1970 World Cup in Mexico marked a triumphant return to glory for Pelé and Brazil. Headlining a formidable squad, Pelé scored four goals in the tournament, including one in the final to give Brazil a 4-1 victory over Italy.

Pelé announced his retirement from soccer in 1974, but he was lured back to the field the following year to play for the New York Cosmos in the North American Soccer League, and temporarily helped make the NASL a big attraction. He played his final game in an exhibition between New York and Santos in October 1977, competing for both sides, and retired with a total of 1,281 goals in 1,363 games.

Retirement did little to diminish the public profile of Pelé, who remained a popular pitchman and active in many professional arenas. In 1978, Pelé was awarded the International Peace Award for his work with UNICEF. He has also served as Brazil’s Extraordinary Minister for Sport and a United Nations ambassador for ecology and the environment.

Pelé was named FIFA’s “Co-Player of the Century” in 1999, along with Argentine Diego Maradona. To many, his accomplishments on the soccer field will never be equaled, and virtually all great athletes in the sport are measured against the Brazilian who once made the world stop to watch him play.

See also 10 Things to know about Pele: The Greatest Footballer that ever lived!

“The secret of life is to have no fear; it’s the only way to function.”