“On an October afternoon in 1954, a 12-year-old Clay, had his bike stolen. A tearful Clay was directed to the basement of the auditorium where a policeman was manning the boxing gym. Joe Martin listened to young Cassius boast about a statewide hunt for his precious bike and heard the threats he was making to the thief if he was ever caught. After a while, Martin asked of Clay, “Well, do you know how to fight?” Clay quipped back, “No, but I’d fight anyway.” Martin’s best advice to the hot-tempered preteen was to come back around the gym and learn to fight. “Why don’t you learn something about fighting,” Martin suggested, “before you go and make any hasty challenges?” 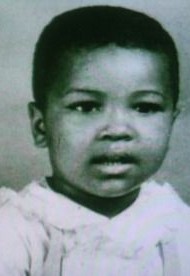 Muhammad Ali as a baby 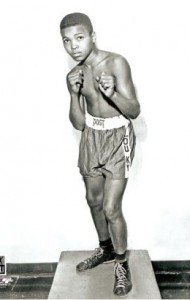 Muhammad Ali as a boy 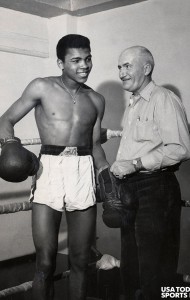 “As a teenager Ali won both the national Amateur Athletic Union (AAU) and Golden Gloves championships. At the age of eighteen he competed in the 1960 Olympic games held in Rome, Italy, winning the gold medal in the lightheavyweight division. This led to a contract with a group of millionaires called the Louisville Sponsors Group. It was the biggest contract ever signed by a professional boxer. Ali worked his way through a series of professional victories, using a style that combined speed with great punching power. He was described by one of his handlers as having the ability to “float like a butterfly, and sting like a bee.”

“I done wrestled with an alligator, I done tussled with a whale; handcuffed lightning, thrown thunder in jail; only last week, I murdered a rock, injured a stone, hospitalised a brick; I’m so mean I make medicine sick.” ~ Muhammad Ali

An Olympic gold medalist and the first fighter to capture the heavyweight title three times, Ali won 56 times in his 21-year professional career.

“Cassius Clay is a slave name. I didn’t choose it, and I didn’t want it. I am Muhammad Ali, a free name, and I insist people use it when speaking to me and of me.” ~ Muhammad Ali

with the Hon. Elijah Muhammad

“Why should they ask me to put on a uniform and go 10,000 miles from home and drop bombs and bullets on brown people in Vietnam while so-called Negro people in Louisville are treated like dogs and denied simple human rights?” ~ Muhammad Ali

athletes in support of Ali

“We’d come home from school and he’d be running around chasing us, wearing Halloween masks, even when it wasn’t Halloween. He was always performing and doing magic tricks. He always ate dinner with us; his favourite was cheeseburgers and ice-cream. Sometimes he would finish my vegetables for me. My father would save all our scribbles and drawings and tell us: ‘These are valuable. I’m going to show them to you one day when you’re big girls.’” ~ daughter Hana Ali

“Truly great people in history never wanted to be great for themselves. All they wanted was the chance to do good for others and be close to God.” ~ Muhammad Ali

“This is the legend of Muhammad Ali, The greatest fighter that ever will be. He talks a great deal and brags, indeed. Of a powerful punch and blinding speed. Ali fights great, he’s got speed and endurance. If you sign to fight him, increase your insurance. Ali’s got a left, Ali’s got a right; If he hits you once, you’re asleep for the night.” ~ poem by Muhammad Ali

The Adventures of Muhammad Ali cartoon

“I try not to speak about all the charities and people I help, because I believe we can only be truly generous when we expect nothing in return.” ~ Muhammad Ali

“Since he retired from boxing, Ali has devoted himself to humanitarian endeavours around the globe. He is a devout Sunni Muslim, and travels the world over, lending his name and presence to hunger and poverty relief, supporting education efforts of all kinds, promoting adoption and encouraging people to respect and better understand one another. It is estimated that he has helped to provide more than 22 million meals to feed the hungry. Ali travels, on average, more than 200 days per year.” ~ Muhammad Ali Center

“Maybe my Parkinson’s is God’s way of reminding me what is important. It slowed me down and caused me to listen rather than talk. Actually, people pay more attention to me now because I don’t talk as much.” ~ Muhammad Ali

Friendship has splendors that love knows not. It grows stronger when crossed, whereas obstacles kill love. Friendship resists time, which wearies and severs couples. It has heights unknown to love.

— Mariama Bâ, So Long a Letter