Since his emergence on the national stage in the late 1990s, Yasiin Bey or Mos Def has locked down a reputation as of the most revered rappers of his generation as well as a highly respected actor. His intelligence, verbal skill and keen eye for social observation have made him a spokesman of the hip-hop generation who appeals to people from all walks of life.

Born Dante Terrell Smith on December 11, 1973, in Brooklyn, NY, Mos Def began rapping at age nine and began professionally acting at age 14, when he appeared in a TV movie. The oldest of 12 children (some sources say nine), he was raised by his mother, Sheron, whom he calls Umi, in Brooklyn’s Roosevelt housing project. His father, Abdul Rahman, whom he calls Abi, lived in neighboring New Jersey. Growing up, he made the most of his surroundings. He said he believed his neighbors were good people with bad habits. Early on, he decided he would work hard and make a better life for himself. At one time, he thought about becoming a doctor or a minister. Filled with initiative, he filled his spare time reading. “I wanted to be informed… I had a curious mind, so I wanted to do things that activated that challenge. I wanted to get involved, I didn’t want to just sit around and accept my surroundings.” 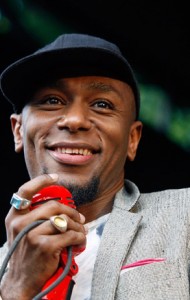 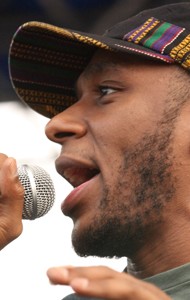 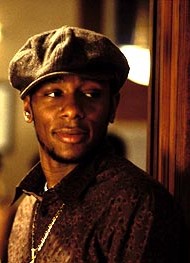 Yasiin made his stage debut in fifth grade in a production of Marlo Thomas’s Free to Be You and Me.  He loved the experience and when he reached high school, he enrolled at a New York City performing arts magnet school. When he was a freshman, he landed his first real acting gig, starring in an ABC movie of the week called God Bless the Child in the late 1980s. At the age of 16 he earned the part of Nell Carter’s son on the sitcom You Take the Kids, which ran from 1990 to 1991. Fresh out of high school he earned a role on the short-lived 1994 TV show The Cosby Mysteries.  He later made appearances on NYPD Blue in 1997 and Spin City in 1998. He landed a few other roles as well and during this time used the name Dante Beze. After high school, his mom worked as his manager.

Though Yasiin was earning sporadic film and television roles, he began turning his attention toward music, which had also been a childhood passion. He began writing rhymes in grade school, at first as a desperate act of survival. Speaking to Entertainment Weekly’s Daniel Fierman, he acknowledged that he was a small and nerdy child who could barely hold his own on the basketball court. “I was a 99-punch kid,” he joked. “If you hit on me 100 times, I’d be like, ‘Okay, now I’m gonna break you.’ So I had to do somethin’ to be able to just survive around my neighbors, you know?” Entertaining would-be bullies with his witty rhymes offered some form of protection. When he was ten years old, he was enthralled by rap group Run-DMC’s song “It’s Like That.” From that moment on, hip-hop played a significant role in his life.

In his early 20s, he changed his name to Mos Def, which is short for his favorite affirmation—”most definitely”—which was his typical response when friends asked him if he wanted to hang out. Around this time Mos Def launched his first group, called Urban Thermal Dynamics, along with his siblings. They signed with a local label but never produced a record. Mos Def, however, began to carve out a name for himself among the Brooklyn hip-hop scene. In 1995, he met De La Soul’s DJ Maseo and was invited to perform on De La Soul’s album  Stakes Is High  on the track “Big Brother Beat” in 1996. Mos Def also sang on 1996’s “S.O.S.,” a song produced by da Bush Babees. This exposure led to a record deal with Rawkus Records. At the time, Mos Def was working at a Brooklyn bookstore called N’kiru Books, alongside another aspiring rapper named Talib Kweli. They spent their time browsing the literature and later became co-owners of the bookstore.

The pair also worked together creating rhymes and in 1998 released a political yet playful album called Mos Def And Talib Kweli Are Black Star; the space entity of the title is a cosmic phenomenon. It became a classic of the hip-hop underground. Just a year later, Mos Def released a solo album, Black on Both Sides, which had a jazzy, R&B flavor. The releases heightened Mos Def’s notoriety and established him as a socially conscious, introspective, and insightful rap artist. In Black on Both Sides, which was certified gold, Mos Def makes references to the insults and injuries black men often feel at the hands of police officers. He also took time to question the amount of money allocated in the U.S. defense budget. The albums established Mos Def as a master of the art of conscious rap.

The albums created quite a buzz in the hip-hop world, but he left them behind to concentrate on acting once again. He earned roles in 2000’s Bamboozled, which was directed by Spike Lee, 2001’s Monster’s Ball, starring Halle Berry, 2002’s Brown Sugar, and 2004’s The Woodsman.  For his role in The Woodsman, he earned a Black Reel Award for best actor in an independent film.

All of the roles, though small, worked together to broaden and mature his acting skills. They also afforded him the opportunity to brush shoulders with industry heavyweights. In 2004 he established himself as a multidimensional actor in the HBO flick Something The Lord Made, playing pioneer heart surgeon Dr. Vivien Thomas. he earned critical acclaim for the role, along with Golden Globe and Emmy nominations.

In 2002 Yasiin became a theater star after landing on Broadway in a production of  Topdog/Underdog.  Starring in the production allowed him to work with renowned director George C. Wolfe in a play that won the author, Suzan-Lori Parks, a Pulitzer Prize. He starred opposite Jeffrey Wright in the two-man show with the duo playing con-artist brothers. He was proud to inspire fellow African Americans to attend the play.

In 2004, he returned to the recording studio to record his second solo album, The New Danger, a commercial and critical success that featured the Grammy-nominated single “Sex, Love, and Money.” Two years later, in 2006, he released a less successful third album, True Magic. However, his fourth and most recent album, 2009’s The Ecstatic, won widespread acclaim, with songs such as “Life in Marvelous Times” and “History” combining poetic and socially acute lyrics with catchy beats and top-notch production. The Ecstatic was nominated for Best Rap Album at the 2010 Grammy Awards.

In addition to his work as an actor and rapper, from 2002 through 2007, Mos Def served as the host of the televised spoken-word program Russell Simmons Presents Def Poetry.

During an interview with MTV, he explained why he decided to switch his name and how it stemmed from materialistic pressures.

“I began to fear that Mos Def was being treated as a product, not a person, so I’ve been going by Yasiin since ’99,” he said. “At first it was just for friends and family, but now I’m declaring it openly.”

“I’m retiring the Mos Def name after 2011. I’m actually doing it. Yasiin. That’s it,” he revealed. “Mos Def is a name that I built and cultivated over the years, it’s a name that the streets taught me, a figure of speech that was given to me by the culture and by my environment, and I feel I’ve done quite a bit with that name and it’s time to expand and move on. Also, I didn’t want to have to deal with having any moniker or separation between the self that I see and know myself as.”

About.com ranked him #14 on their list of the Top 50 MCs of Our Time, while The Source ranked him #23 on their list of the Top 50 Lyricists of All Time. AllMusic called him one of the most promising rappers to emerge in the late 1990s, as well as one of hip-hop’s brightest hopes entering the 21st century. He has influenced numerous hip hop artists throughout his career, including Lupe Fiasco, Jay Electronica, Kid Cudi, and Saigon. Kendrick Lamar has also mentioned him as a very early inspiration and someone he listened to “coming up” as a young rapper.