Mabel Fairbanks was an African American figure skater and coach. She was inducted into the US Figure Skating Hall of Fame, as the first African-American, and the International Women’s Sports Hall of Fame. 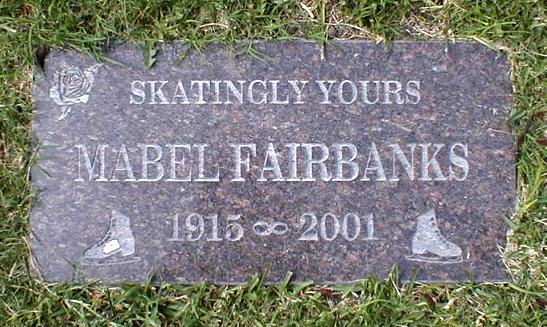 Born in New York City November 14, 1915, Fairbanks discovered her lifetime passion as a young girl in the 1930s, watching a Sonia Henie movie. She then saw a pair of black skates in a pawnshop window and talked the guy down to $1.50. They were two sizes too big, but that didn’t stop Fairbanks. She stuffed them with cotton, found her balance on blades by going up and down the stairs in her building, and took to the nearby frozen lake. It wasn’t long before Fairbanks was sailing across the ice. When a passerby suggested she try out the rink in Central Park, she was soon skating and attaining solid 6.0 judging, but the pro clubs wouldn’t have her because of her race.

“I remember they said to me, ‘we don’t have Negroes in ice shows.’ “But I didn’t let that get in my way, because I loved to skate.”

Fairbanks continued to refine her skill and returned to the rink again and again. Then one day, the manager noted her persistence and the shiny pair of new skates her uncle bought her from the Macy’s basement, and he let her inside. From then on, Fairbanks’ ability and sparkle shattered the race barrier at that pivotal rink, and professional skaters started giving her free lessons. In the 1940s, Fairbanks came to Los Angeles and performed in nightclubs like Cyro’s.

When Fairbanks was invited to skate on the road with the Rhapsody On Ice show, she jumped at the chance, even though they said they needed her as “someone to skate in the dark countries.” She wowed international audiences, returning to Los Angeles only to find it still blind to her talent but not to her color. “They had a sign at the Pasadena Winter Gardens that read “Colored Trade Not Solicited,” she remembers.” But it was a public place, so my uncle had newspaper articles written about it and passed them out everywhere until they finally let me in.”

In the 1940s she moved to Los Angeles, travelled to Mexico with the Ice Capades, and finally broke into the famous Ice Follies shows. Yet again she would suffer discrimination, once being barred from a show by her heroine, Sonja Henie. Then she started appearing in ice shows in Las Vegas and was befriended by the “rat pack”, the boozy hell-raising clique of Frank Sinatra, Peter Lawford, Dean Martin, and Sammy Davis Jr. Other friends were actors Cary Grant and Zsa Zsa Gabor.

As she grew older, Fairbanks turned increasingly to coaching, and is credited with helping the careers of US and world champions such as Scott Hamilton, Atoy Wilson, Tiffany Chin, and 1970s champions Tai Babilonia and Randy Gardner, whom she put together as a skating pair. She also coached Kristi Yamaguchi, the 1992 Olympic gold medallist, in her early days, and also first paired the Japanese American with champion Rudy Galindo, a Hispanic.

Fairbanks was a staunch advocate for equality in the sport of skating. She played a key role in the Culver City Skating Club of Los Angeles admitting their first black member in 1965. She was inducted into the U.S. Figure Skating Hall of Fame in 1977. She did not have any jumps or skating moves named after her (such as the Lutz, named after Alois Lutz or the Sachow named after Ulrich Slachow). One of her signature moves a spin—where she extended her leg back and above her head and another where she hold her leg straight up—which are commonplace today were dismissed as “spin variations.”

She died in 2001 at the age of 85 and was posthumously inducted into the International Women’s Sports Hall of Fame.

Discipline is the servant of inspiration.