Lillian E. Fishburne is the first African American woman to become a Rear Admiral in the United States Navy. 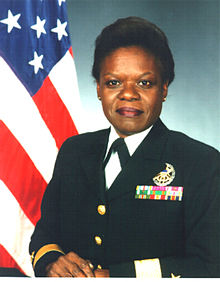 Born in Patuxent River, Maryland, on March 25th in 1949, Fishburne was raised in Rockville, MD. where she attended Richard Montgomery High School.  In 1971, she graduated from Lincoln University in Oxford, Pennsylvania with a Bachelor of Arts degree in Sociology. In February 1973, Fishburne became an Ensign after graduating from the Women Officers School at Newport, Rhode Island.

Fishburne’s first naval assignment was at the Naval Air Test Facility, Lakehurst, New Jersey, as a Personnel and Legal Officer.  From August 1974 to November 1977, Fishburne was an Officer Programs recruiter in Miami, Florida. For the next three years, 1977 to 1980, Fishburne was the Officer in charge of the Naval Telecommunications Center at the Great Lakes, Illinois Naval Base.

Between 1980 and 1982, Fishburne earned two master’s degrees – Master of Arts in Management from Webster College in St. Louis, Missouri in 1980 and Master of Science in Telecommunications Systems Management from the Naval Postgraduate School in Monterey, California in 1982. She then served two years as Command Control Communications Director for the Chief of Naval Operations.

Fishburne held assignments in Japan, Washington, D.C., and Key West Florida for the next decade.  In December 1994, she became Chief of the Command and Control Systems Support Division for the Joint Chiefs of Staff at the Pentagon.  She then served as commander of the Naval Computer and Telecommunications Area Master Station in Wahiawa, Hawaii from 1995 to 1998.  Fishburne attained the rank of Rear Admiral on February 1, 1998. She served as Director of the Information Transfer Division for the Space Information Warfare for the chief of Naval Operations in Washington, D.C. for three years, then retired in February 2001. Her collection of decorations include: Defense Superior Service Medal, Navy Commendation Medal (2), Navy Achievement Medal and Meritorious Service Medal .

After three years as the Director of the Information Transfer Division for the Space, Information Warfare for the Chief of Naval Operations, in Washington, D.C., Fishburne retired in February 2001. Her decorations include the Defense Superior Service Medal, Legion of Merit, two Meritorious Service Medals, two Navy Commendation Medals, and the Navy Achievement Medal.  Fishburne is married to Albert J. Sullivan, a native of Daytona Beach, Florida. They have a daughter named Cherese.

History is not everything, but it is a starting point. History is a clock that people use to tell their political and cultural time of day. It is a compass they use to find themselves on the map of human geography. It tells them where they are, but more importantly, what they must be.