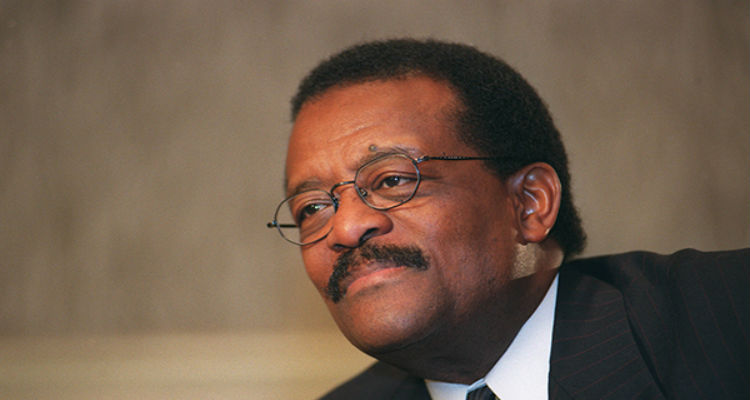 Johnnie Cochran Jr. was an African American attorney, who took on highly publicized police brutality cases, and famously defended celebrity clients. Cochran, best known for his leadership role in the defense and criminal acquittal of O. J. Simpson, was preparing the Reparations For Slavery lawsuit against the United States of America before his death.

Cochran was born on October 2, 1937 in Shreveport, Louisiana, and grew up in a prosperous family. He was raised in Los Angeles and graduated first in his class from Los Angeles High School in 1955. He went on to receive his Bachelor of Science degree in business administration from the University of California, Los Angeles in 1959.

Inspired by Thurgood Marshall and the legal victory he won in Brown v. Board of Education, Cochran decided to dedicate his life to practicing law. Cochran wrote: “I read everything that I could find about Thurgood Marshall and confirmed that a single dedicated man could use the law to change society.” Cochran felt his career choice was a calling, a double opportunity to work for what he considered to be right and to challenge what he considered wrong.

Cochran was accepted by the Loyola Marymount University School of Law and began his studies there in the autumn of 1959. Having finished his law studies in 1962 he passed the California bar in 1963, then took a job in Los Angeles as a deputy city attorney in the criminal division.

In 1965, he entered private practice with the late Gerald Lenoir, a well-known local criminal lawyer. After a short period with Lenoir, he formed his own firm, Cochran, Atkins & Evans, where he dealt with criminal and civil cases. Cochran’s career was launched from this office with a highly-publicized and inflammatory case.

In May of 1966, a young black man named Leonard Deadwyler was shot dead by police as he tried to rush his pregnant wife to the hospital. Cochran represented Deadwyler’s family, who accused the police of needless brutality in their son’s murder. The Los Angeles Police Department insisted that the officers had acted in self-defense. “To me, this was clearly a bad shooting,” Cochran maintained in The American Lawyer. “But the [district attorney] did not file charges, and when our firm filed a civil suit we lost. Those were extremely difficult cases to win in those days. But what Deadwyler confirmed for me was that this issue of police abuse really galvanized the minority community. It taught me that these cases could really get attention.”

Cochran soon developed a reputation in Los Angeles’s African American communities for handling cases involving police misconduct. In the late 1970s, he made his name with a series of high-profile police brutality and criminal cases. In 1977 he was named the Criminal Trial Lawyer of the year. In 1978, he became the first African American to hold the position of Assistant District Attorney for Los Angeles County.

Soon after returning to private practice Cochran established himself as “the best in the West,” to quote Ebony magazine. One of his first major victories occurred in the case of Ron Settles, a college football player who police said had hanged himself in a jail cell after having been picked up for speeding. On the behalf of Settles’ family, Cochran demanded that the athlete’s body be exhumed and examined. A coroner determined that Settles had been strangled by a police choke hold. A pre-trial settlement brought the grieving family $760,000.

The Settles case settlement was the first in a series of damage awards that Cochran has won for clients—some observers estimate he has won between $40 and $43 million from various California municipalities and police districts in judgements for his clients.

Success begot success for Cochran. The Settles case was followed by another emotional case in which an off-duty police officer molested a teenager and threatened her with bodily harm if she told anyone. In that case Cochran spurned an out-of-court settlement in six figures and took the issue to the courtroom—where a jury awarded his client $9.4 million. A post-verdict settlement paid the young woman $4.6 million.

On Jackson’s behalf, Cochran arranged an out-of-court settlement with a boy who had accused the singer of molestation. Cochran had the case retired in such a way that the charges against Jackson were withdrawn, and Jackson could publicly proclaim his complete innocence. Cochran also gained an acquittal for Diff’rent Strokes star Todd Bridges, who stood accused of attempted murder.

However, Cochran will forever be remembered as the lead attorney in the 1995 O.J. Simpson Trial where he won an acquittal for defendant Simpson.

In his 2002 book, A Lawyer’s Life, Cochran wrote that the case “gave me the platform to try to change some of those things that need to be changed in this country… It was the Simpson case that put me squarely in a position to make a difference. And that was precisely the reason I became an attorney.” he wrote.

Before Cochran’s nationwide fame in the Simpson trial, actor Denzel Washington interviewed Cochran as part of his research for the movie Philadelphia. After the Simpson trial, Cochran himself was a frequent commentator on law-related television shows. Aside from being featured on television shows, he hosted his own show, Johnnie Cochran Tonight, on the Court TV channel. Cochran left Court TV in 1999 to create The Cochran Firm, one of the largest personal injury law firms in America.

In addition, Cochran spent much of his time preparing for a case, collecting historical data, information, and studying cases to sue the U.S. government for Reparations for Africans in America. Cochran had assembled a ‘ Reparations Dream Team’ of high powered trial lawyers to help him in this lawsuit.

One of his last major cases came in 2001 when he won an $8.7 million settlement against the City of New York in the Abner Louima police brutality case. Abner Louima, an Haitian immigrant, was sodomized with a broken broomstick by two New York City policemen. However, it was after winning an acquittal for Sean (“P. Diddy”) Combs that he retired, and later declined to represent R. Kelly and Allen Iverson in criminal cases when they asked for his services.

In April 2004, Cochran underwent surgery, which led to his staying away from the media. Shortly thereafter, he told the New York Post he was feeling well, and that he was in good health. He died at his home in Los Angeles on Tuesday, March 29, 2005 from a brain tumor, which had been diagnosed in December 2003.

According to his family, Cochran rallying cry was ‘An injustice anywhere is a threat to justice everywhere.’

Sarah Vaughan: “The Divine One”

It’s so clear that you have to cherish everyone. I think that’s what I get from these older black women, that every soul is to be cherished, that every flower Is to bloom.