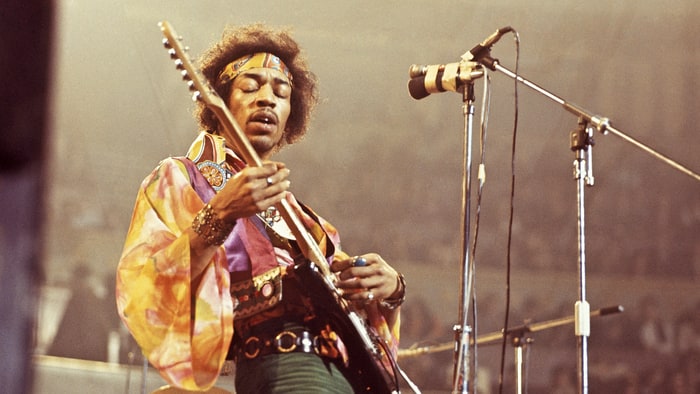 Jimi Hendrix, the African American rock guitarist, singer, and songwriter is widely recognized as one of the most creative and influential musicians of the 20th century and is hailed by Rolling Stone magazine as the #1 guitarist of all time. 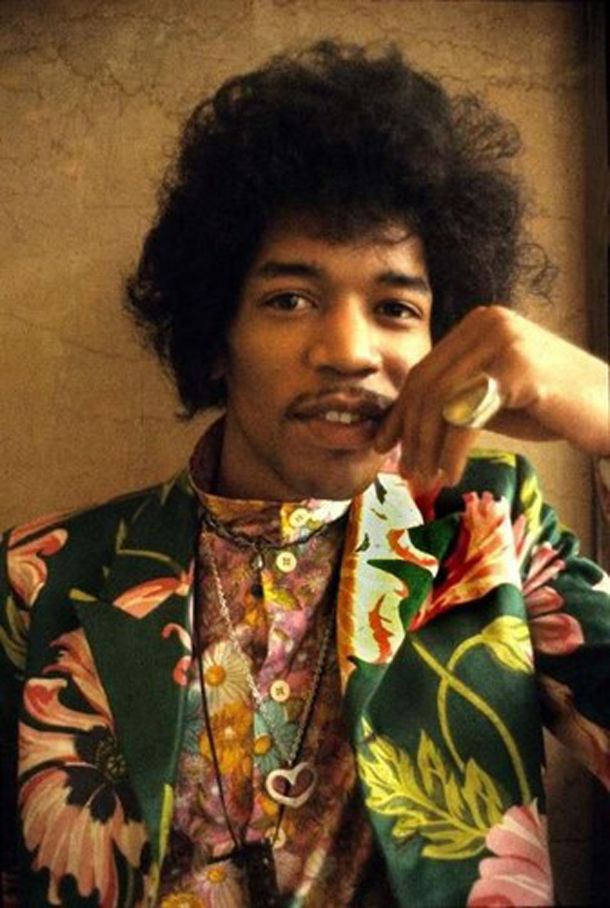 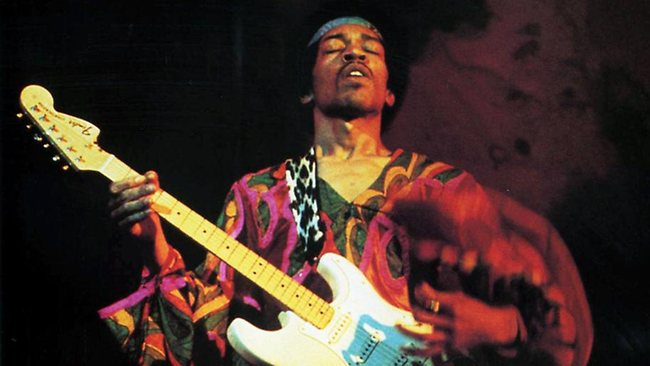 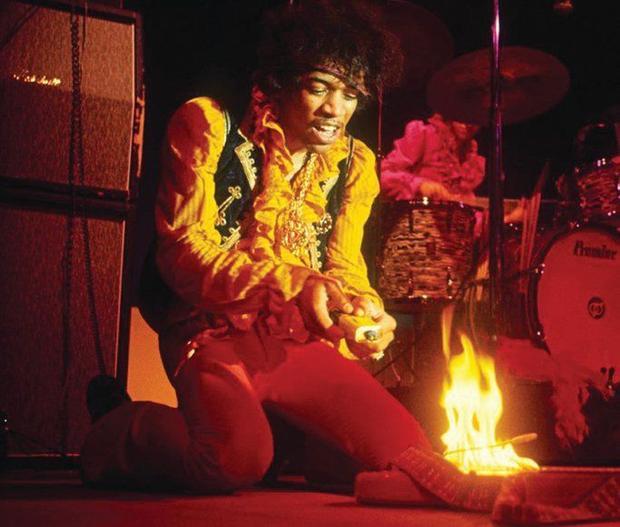 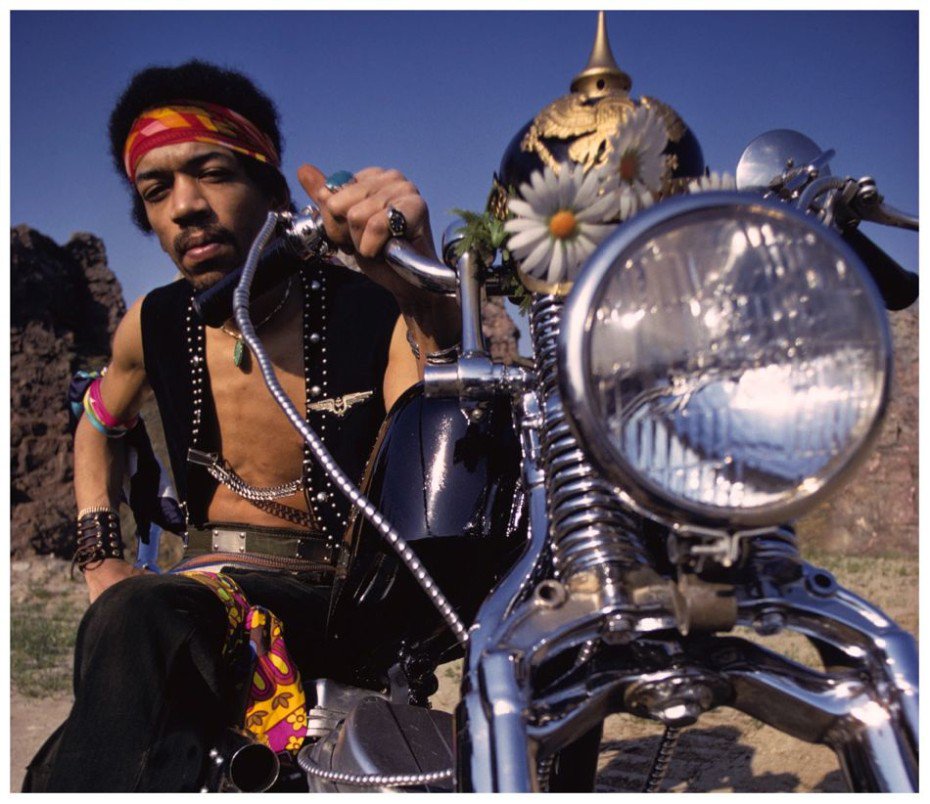 Born November 27, 1942, in Seattle, Washington, Hendrix taught himself to play guitar as a teenager, listening to records by blues guitarists Muddy Waters and B.B. King and rockers such as Chuck Berry and Eddie Cochran. He played in high school bands before enlisting in the U.S. Army in 1959. Discharged in 1961, Hendrix began working under the pseudonym Jimmy James as a pickup guitarist. By 1964, when he moved to New York, he had played behind Sam Cooke, B.B. King, Little Richard, Jackie Wilson, Ike and Tina Turner, and Wilson Pickett. In New York he played the club circuit with King Curtis, the Isley Brothers, John Paul Hammond, and Curtis Knight.

Hendrix formed his own band, Jimmy James and the Blue Flames, shedding the role of back-line guitarist for the spotlight of lead guitar.

Throughout the latter half of 1965, and into the first part of 1966, Jimmy played the rounds of smaller venues throughout Greenwich Village, catching up with Animals’ bassist Chas Chandler during a July performance at Cafe Wha? Chandler was impressed with Jimmy’s performance and returned again in September 1966 to sign Hendrix to an agreement that would have him move to London to form a new band.

The Experience’s first single, “Hey Joe,” spent 10 weeks on the UK charts, topping out at spot No. 6 in early 1967. The debut single was quickly followed by the release of a full-length album Are You Experienced, a psychedelic musical compilation featuring anthems of a generation. Are You Experienced has remained one of the most popular rock albums of all time, featuring tracks like “Purple Haze,” “The Wind Cries Mary,” “Foxey Lady,” “Fire,” and “Are You Experienced?”

Although Hendrix experienced overwhelming success in Britain, it wasn’t until he returned to America in June 1967 that he ignited the crowd at the Monterey International Pop Festival with his incendiary performance of “Wild Thing.” Literally overnight, The Jimi Hendrix Experience became one of most popular and highest grossing touring acts in the world.

Hendrix followed Are You Experienced with Axis: Bold As Love. By 1968, Hendrix had taken greater control over the direction of his music; he spent considerable time working the consoles in the studio, with each turn of a knob or flick of the switch bringing clarity to his vision.

Back in America, Jimi Hendrix built his own recording studio, Electric Lady Studios in New York City. The name of this project became the basis for his most demanding musical release, a two LP collection, Electric Ladyland. Throughout 1968, the demands of touring and studio work took its toll on the group and in 1969 the Experience disbanded.

In August 1969, Hendrix appeared at the Woodstock Festival with a large, informal ensemble called the Electric Sky Church, and later that year he put together the all-black Band of Gypsys — with Cox and drummer Buddy Miles (Electric Flag), with whom he had played behind Wilson Pickett. The Band of Gypsys’ debut concert at New York’s Fillmore East on New Year’s Eve 1969 provided the recordings for the group’s only album during its existence, Band of Gypsys (Number Five, 1970). (A second album of vintage tracks was released in 1986.) Hendrix walked offstage in the middle of their Madison Square Garden gig; when he performed again some months later it was with Mitchell and Cox, the group that recorded The Cry of Love (Number Three, 1971), Hendrix’s last self-authorized album. With them he played at the Isle of Wight Festival, his last concert, in August 1970, a recording of which would see release in 2002. A month later he was dead. The cause of death was given in a coroner’s report as inhalation of vomit following barbiturate intoxication. Suicide was not ruled out, but evidence pointed to an accident.

In 1995 Jimi’s father Al Hendrix regained complete control of his son’s estate, which included Jimi Hendrix’s finished and unreleased recordings, as well as his musical compositions. This evolved into a series of CD reissues that were remastered from the original tapes. Having re-released CDs of the guitarist’s entire catalogue, the Hendrix estate, under the Experience Hendrix imprint of MCA, also issued the album on which Hendrix was working at the time of his death, First Rays of the New Rising Sun(Number 49, 1997). South Saturn Delta (Number 51, 1997) delved further into the archives. Experience Hendrix: The Best of Jimi Hendrix (Number 133, 1998) followed, as did the double-CD BBC Sessions (Number 50, 1998), the Band of Gypsys-era Live at the Fillmore East (Number 65, 1999), Live at Woodstock (Number 90, 1999), and, in 2000, the four-CD/eight-LP Jimi Hendrix Experience box set. (Several other live discs were made available through an online imprint, Dagger Records.)