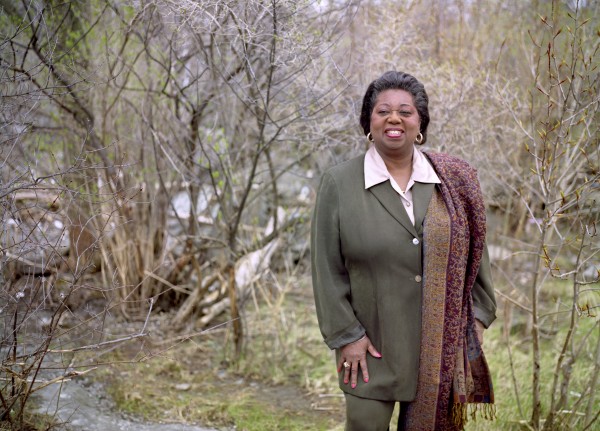 Jean Augustine became the first Black woman elected to the Parliament of Canada. An energetic advocate of social justice, she worked as the principal of an elementary school before entering federal politics. Among her accomplishments as an MP was the introduction of a motion, passed unanimously, to have February proclaimed as Black History Month in Canada. 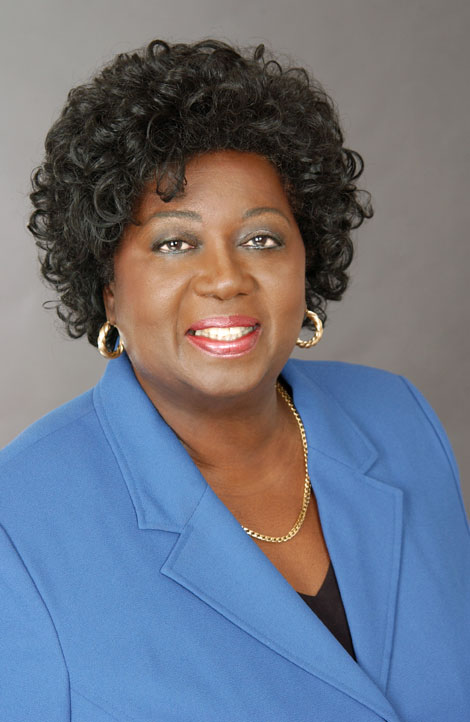 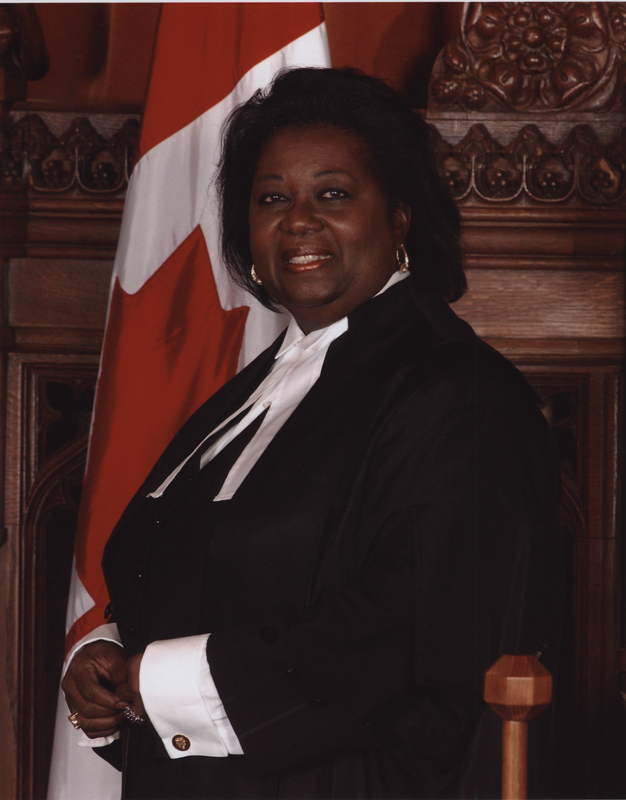 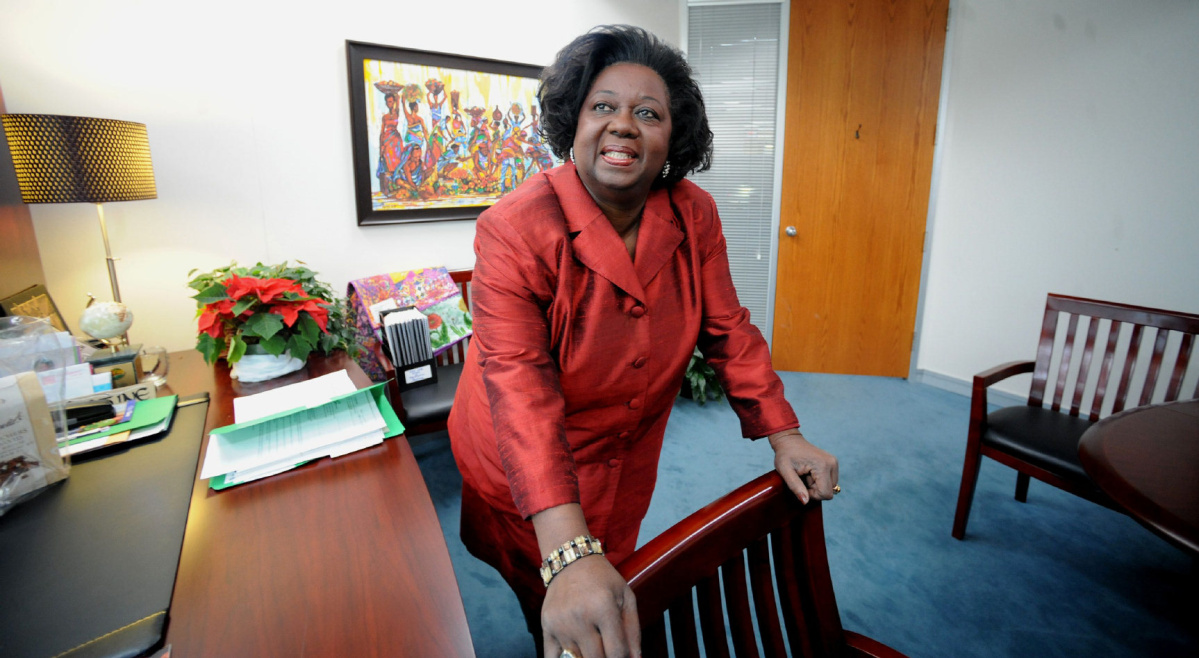 Jean Augustine was born September 9th, 1937, in Happy Hill, Grenada, the daughter of Olive and Ossie Simon, a sugar cane plantation worker. The family was shaken when Ossie died of tetanus; Jean was a toddler and Olive was pregnant with her second child. The family moved in with an older woman called “Granny,” where the Augustine children were encouraged to succeed in school. During her high-school years, she founded an all-girl band and also hosted her own youth program on a local radio station before graduating a year early.

An A student, Augustine expressed interests in music, radio broadcasting and teaching. She became a teacher, but the pay was low. After learning about opportunities in Canada, Augustine applied for a nanny position through the West Indian Domestic Scheme. The program, which operated from 1955 to 1966, enlisted women aged 18 to 35 with a minimum eighth grade education to fill the growing need for nannies in Canada. In exchange for working in family homes for one year, the young women were given landed immigrant status (see Citizenship). Augustine arrived in Canada in 1960 and worked for one year in the Forest Hill neighbourhood of Toronto.

Augustine was fortunate, however, for she had been placed with a Toronto pediatrician’s family who were of a generous spirit, and they recognized that the new caretaker for their children was overly qualified for the job. They helped her find an office job at a medical-billing firm, and she took night-school classes at the Toronto Teacher’s College and babysat for the family in her spare time. After earning her teaching degree, Augustine taught elementary school in the Toronto public school system. She eventually became one of the first black school principals in the country.

Augustine had long been active in black political and social organizations in Toronto, which began to emerge as a richly multinational and multicultural hub during the 1960s. The very first meeting of the Grenada Association was held in her apartment, and she also served on a committee that helped to organize the city’s first Caribana Festival in 1967, which later became one of Toronto’s most important annual tourist events.

Augustine’s community service work led her into politics. She served on municipal task forces on drug abuse and crime, and became active in the Liberal Party, one of Canada’s two main political parties. In 1985 she was named to the transition team for new Ontario premier David Peterson. As thanks for her service, Peterson made her chair of the Metro Toronto Housing Authority, the largest landowner in Canada. Augustine served in that post for six years, and came to the attention of the national Liberal Party leadership as a result.

Jean Augustine was nominated as Liberal candidate for the Etobicoke–Lakeshore district in Ontario on 25 October 1993. An enthusiastic, intelligent and charismatic woman, Augustine won the seat and became the first Black woman elected to the House of Commons. Of approximately 65,000 voters registered in the district, only 700 were Black. Augustine was re-elected in 1997, 2000, 2002 and 2004.

As a new Member of Parliament, Augustine tackled issues that were important to her riding, to women and to Canadians. Appointed Parliamentary Secretary to the Prime Minister of Canada (1993–96), she was Prime Minister Jean Chrétien’s trusted voice on committees, at international meetings and in Parliament when he was absent from the House of Commons.

In the mid-1990s, Jean Augustine played a crucial role in establishing Black History Month in Canada. Though individual communities had held celebrations as far back as the 1950s — e.g., in Halifax and Toronto — none existed federally. However, in 1979, the Ontario Black History Society made significant headway when it convinced the City of Toronto to formally declare February as Black History Month. In 1993, the Society successfully petitioned the Ontario government to declare a province-wide celebration. Motivated by this victory, they approached Augustine about extending Black History Month across the nation. Augustine enthusiastically supported the idea. As she mentioned to the Canadian Museum for Human Rights:

I was an educator. […] I recognized that the classroom curriculum was saying very little about African Canadians. The same thing was done to Indigenous peoples — if there was any reference, it was either in the footnote or as a sideline. Black Canadians were not part of the script and were not shown contributing to Canadian society.

With that in mind, Augustine put a motion before Parliament to recognize February as Black History Month, asking, “That this House take note of the important contribution of Black Canadians to the settlement, growth and development of Canada, the diversity of the Black community in Canada and its importance to the history of this country.” The motion passed unanimously in December 1995, and February was proclaimed Black History Month in Canada.

As a Member of Parliament, Jean Augustine served as Chair of the National Liberal Women’s Caucus for three terms. She was also elected chair of the Standing Committee on Foreign Affairs and International Trade in February 2002.

After her appointment, Augustine told The Globe & Mail, “It says to others and ourselves that Blacks can be in every place in our society. It’s important that no one be able to say that Blacks can’t perform in every segment of Canadian society because we can.”

In 2004, Augustine was elected Assistant Deputy Speaker of the House of Commons.

A member of the Citizenship and Immigration Committee over several terms, Augustine sat on international boards and associations related to women’s rights, human rights, HIV/AIDS, economic development and industry, and immigrant rights, as well as racism and discrimination.
After retiring from politics in November 2005, Jean Augustine continued her career in advocacy. In March 2007, the Ontario government appointed her the province’s first Fairness Commissioner. The Office of the Fairness Commissioner (OFC) ensures that qualified foreign-trained professionals (e.g., in medicine, teaching) can get the required licences to practise in the province.

During Augustine’s tenure, the OFC influenced hundreds of improvements made to licencing procedures in Ontario — improvements that made the process easier to navigate, more transparent and impartial. After eight years at the helm of OFC, Augustine retired in March 2015.
After retiring from politics in November 2005, Jean Augustine continued her career in advocacy. In March 2007, the Ontario government appointed her the province’s first Fairness Commissioner. The Office of the Fairness Commissioner (OFC) ensures that qualified foreign-trained professionals (e.g., in medicine, teaching) can get the required licences to practise in the province.

During Augustine’s tenure, the OFC influenced hundreds of improvements made to licencing procedures in Ontario — improvements that made the process easier to navigate, more transparent and impartial. After eight years at the helm of OFC, Augustine retired in March 2015.

In 1987, Jean Augustine received the first Kay Livingstone Award from the Congress of Black Women of Canada. In 1994, Pride magazine awarded her with the Canadian Black Achievement Award. In 2002, she was sworn into the Queen’s Privy Council, and in 2007 Grenada’s University of the West Indies praised Augustine with their Caribbean Luminary Award.

Augustine is divorced and has two grown children. Back in Grenada, she is a well-known figure and object of national pride. After her impressive first House of Commons win, Grenadians presented her with a plaque that read simply, “From Happy Hill to Parliament Hill.” She remains grateful to Granny, who died in 1967, and to her other family members and friends who have also passed away. “I know they would have been so proud to know that I’ve come to this country,” she told Foster in Chatelaine, “and I’ve reached the highest place in the land.”