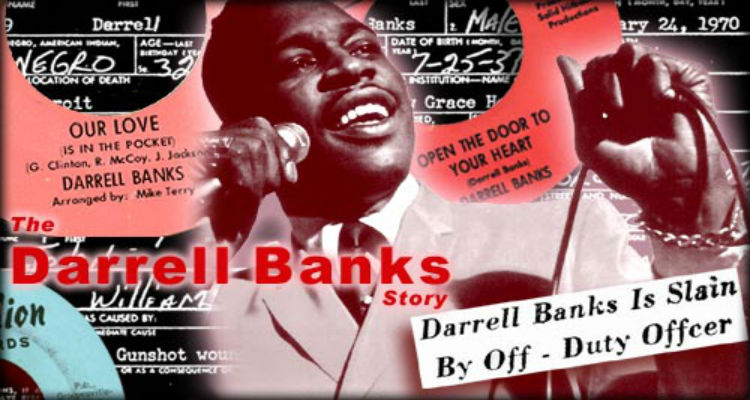 Darrell Banks was an American soul singer who recorded a song that would become the “world’s rarest record”. Recently a copy of his song, Open the Door to Your Heart on the London label, was uncovered. Open the Door to Your Heart was Banks only hit, reaching number 2 on the R&B chart in the US. Called the “the find of a lifetime”, and the “holy grail” for record collectors, the copy sold for £14,543 in Dec 2014. Banks, who toured with soul singer Jackie Wilson, only released two full-length albums before he was killed in Detroit in February 1970 under dubious circumstances. He was shot in the neck by an off-duty policeman, who had been having an affair with his girlfriend. He was buried in an unmarked grave, until the Soulful Detroit website placed a memorial stone there in 2004.

Banks was born Darrell Eubanks on July 25, 1937 in Mansfield, Ohio, but grew up in Buffalo, New York. He sang in church before going secular, when in the mid-sixties he met up with local dentist and music fan, Doc Murphy who gave him a chance at Club Revilot in downtown Buffalo. Spotting that Banks was a special talent, Murphy, who was now his manager, linked him up with Lebaron Taylor who had formed Solid Hitbound Productions with Don Davis in Detroit. Darrell’s first song called Open the Door to Your Heart was penned by himself and fellow Buffalo resident Donnie Elbert. It gave the label an astonishing chart debut in July 1966, reaching #2 in the R&B Charts and #27 on the Billboard Hot 100. When the single came out, however, only Banks was credited as songwriter and a protracted legal battle ensued. A second single, Somebody (Somewhere) Needs You, hit #34 R&B and #55 pop later that year.

Moving to Atco Records, Banks released the singles Here Come the Tears/I’ve Got That Feelin and Angel Baby (Don’t Ever Leave Me)/Look into the Eyes of a Fool in 1967, neither of which charted. Atco subsidiary Cotillion Records released his last single under the Atlantic Records umbrella, I Wanna Go Home/The Love of My Woman.

From there Banks signed to Stax Records, who released another full-length album of his in 1969. This would be Banks’s last recording.

Banks, an exciting entertainer, was said to be moody, quick tempered and kept a “don’t tread on me” Sonny Liston scowl on his face. In February 1970, Banks was shot and killed by policeman Aaron Bullock in Detroit, Michigan. Bullock, an off duty policeman, was seeing Banks’ woman, Marjorie Bozeman. Bozeman, a barmaid, allegedly was trying to leave Banks, who was divorced and the father of two children. Banks was waiting when Bullock dropped Bozeman off after work; when Banks grabbed her, Bullock intervened, Banks pulled a gun, and Bullock reacted with deadly force.

Banks who was taken to New Grace Hospital, was declared dead at 12:10pm on 24th February 1970. After the funeral, some of Detroit’s top performers, including Motown’s Martha Reeves and the Vandellas, staged a benefit for Bank’s family. The Chronicle reported that it “drew a turn away crowd”.

This was a tragic end to a promising career, but it was not the end of Darrell’s story.

In England, the underground Northern Soul scene continued to play the music of Darrell Banks, and 33 years later several fans, from Scotland, England, Ohio and New York came to pay their respects at his grave in Detroit Memorial Park. Tragically when searching for the grave they had to seek the help of DMP employee James Norman, as there was no marker to be found at Section 36, Plot 539. The stunned group decided at that moment that something must be done to properly commemorate Banks, who had given so much pleasure, to so many people, around the globe. Within a few weeks funds were secured via an online appeal on the Forum Members of Internet website SoulfulDetroit.com. The response came from Australia, Finland, Scotland, England and the United States and a memorial bench was installed in 2004, 34 years after his passing.

Then in June 2014 a rare copy of Darrell Banks’s mid-tempo classic Open the Door to Your Heart was uncovered. The London Records’ pressing of Banks’ Open the Door to Your Heart is thought to be the only copy in circulation, as the record label had presumably melted down the copies they’d pressed before the single came out on Stateside a few weeks later. The rare copy was called “the holy grail,” as “nobody thought it existed.” In December 2014, a collector paid £14,543 for the single.

Black men and women who refuse to live under oppression are dangerous to [whyte] society because they become symbols of hope to their brothers and sisters, inspiring them to follow their example.”