Charles Frank Bolden, Jr. is the current administrator of NASA, a retired United States Marine Corps Major General, and former NASA astronaut. A 1968 graduate of the United States Naval Academy, he became a Marine Aviator and test pilot. After his service as an astronaut, he became Deputy Commandant of Midshipmen at the Naval Academy. On May 23, 2009, President Barack Obama announced the nomination of Bolden as NASA Administrator and Lori Garver as Deputy NASA Administrator. Bolden was confirmed by the Senate on July 15, 2009. He is the first African American to head the agency on a permanent basis. 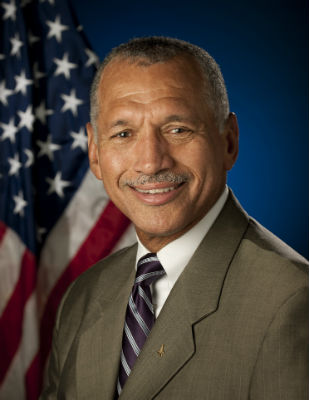 Charles Frank Bolden, Jr., was born to Charles Frank and Ethel Bolden, both teachers, on August 19th, 1946 in Columbia, South Carolina. He graduated from C.A. Johnson High School in Columbia, S.C. in 1964. In 1968, he earned a Bachelor’s degree in Electrical Science from the United States Naval Academy, and completed a Master’s degree in Systems Management from the University of Southern California in 1977.

After completing his undergraduate studies at the United States Naval Academy, Bolden accepted a commission as a second lieutenant in the United States Marine Corps. After completing his flight training, he became a Naval Aviator in May of 1970. From 1972 to 1973, Bolden flew more than 100 flights into North and South Vietnam, Laos, and Cambodia while assigned at the Royal Thai Air Base Nam Phong, Thailand.

Upon returning to the United States in 1973, Bolden held various Marine Corps assignments at the Marine Corps Air Stations in Los Angeles and El Toro, California. In 1979, Bolden graduated from the United States Naval Test Pilot School and was then assigned to the Naval Air Test Center’s System’s Engineering and Strike Aircraft Test Directorates.

In 1980, Bolden was selected as an astronaut candidate by NASA and became an astronaut in 1981. During his time at NASA, Bolden went into space four times between 1986 and 1994, commanding two of the missions.

One does not escape fate by running.