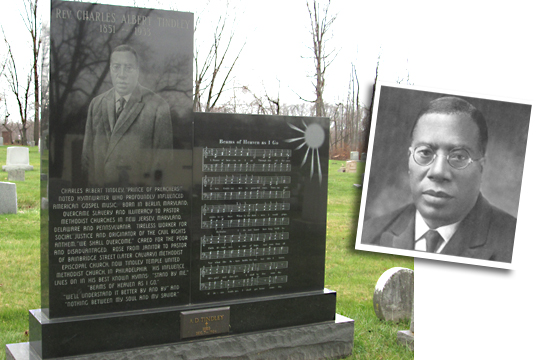 Tindley was born in Berlin, Maryland on July 7, 1851, son of Charles and Hester Tindley. His father was enslaved but his mother was free. Hester died when he was very young; he was taken in by his mother’s sister Caroline Miller Robbins in order to keep his freedom. In his Book of Sermons (1932), he speaks of being “hired out” as a young boy, “wherever father could place me.” He married Daisy Henry when he was seventeen. Together they had eight children, some of whom would later assist him with the publication of his hymns.

Tindley was largely self-taught throughout his lifetime. He learned to read mostly on his own. After he and Daisy moved to Philadelphia in 1875, he took correspondence courses toward becoming a Methodist minister. He did this while working as a sexton (building caretaker) for the East Bainbridge Street Church.

Following ordination, Tindley served several congregations before returning to Calvary Methodist Episcopal Church in 1902, not as a janitor but as its pastor. Serving the congregation for over 30 years, the church was renamed Tindley Temple Methodist Church in 1924 over his objections. The congregation included African Americans, Europeans, Jews and Hispanics. Some estimate that the congregation had as many as 12,500 members at the time of Tindley’s death.

“Stand by Me” is one of the most famous of Tindley’s many gospel songs. Composing both the words and the music, the pastor included it in New Songs of Paradise, No. 6, a collection he published in 1905.
Echoes from another of Tindley’s gospel songs helped to galvanize African-Americans in their struggle for justice. “I’ll Overcome Some Day” inspired the most famous song of the civil-rights movement, “We Shall Overcome.”

Jose Aguinelo dos Santos: The Oldest Person in the world?

When you love a man, he becomes more than a body. His physical limbs expand, and his outline recedes, vanishes. He is rich and sweet and right. He is part of the world, the atmosphere, the blue sky and the blue water.