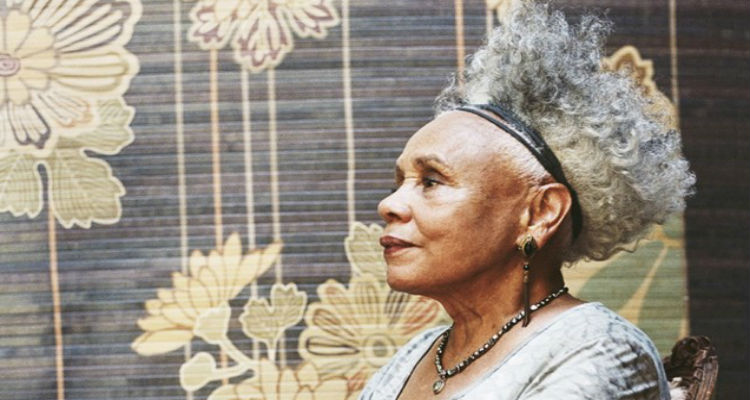 Betye Saar is an African American artist and educator best known for her artwork that addressed Euro-American racism and stereotypes head on, typically of the assemblage format. One of her better-known and controversial pieces is titled “The Liberation of Aunt Jemima.” It is a “mammy” doll carrying a broom in one hand and a shotgun in the other, and placed in front of the syrup labels. 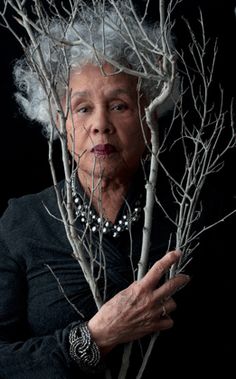 The stars, the cards, the mystic vigil

may hold the answers.

By shifting the point of view

an inner spirit is released.

Saar was born Betye Irene Brown, to parents Jefferson Maze Brown and Beatrice Lillian Parson on July 30, 1926 in Los Angeles, California. Her father, who had attended the University of California at Los Angeles, died from kidney failure when Saars was only five years old. After his death, Saar, her mother and two siblings moved to Pasadena, where they lived with Saar’s great-aunt, Hattie Keys. During this time Saar’s mother also took work as a seamstress to support the family. Her mother often made ends meet by recycling scraps of discarded materials to create things her children needed. In a subtle way, this economical use of everyday, often overlooked materials served as an inspiration in Saar’s later works.

After graduating in 1949, Saar worked as a social worker in addition to pursuing her interest in art. A partnership with enamel jewelry artist Curtis Tann brought Saar into Tann’s circle of black artist friends and patrons. In the course of their business they also entered state fairs and community art competitions, one of which led to Saar meeting her future husband, Richard Saar, whom she married in 1952. Shortly thereafter, she quit her job as a social worker and set up a small home studio, creating enamel jewelry and designing greeting cards. Saar began her graduate education in 1958, originally working towards a career in teaching. However, a printmaking class she took as an elective changed the direction of her artistic interests. Saar credits printmaking as her “segue from design into fine arts.”

As a child, Saar often spent summers visiting her paternal grandmother in Watts. During these trips, Saar, her brother and her sister would “treasure-hunt” in her grandmother’s backyard, collecting items such as bottle caps, feathers, old buttons and broken glass. Using these seemingly useless items, Saar would make dolls, puppets and gifts for her family. The trips not only strengthened her connection to her own family history, they also enabled Saar to witness artist Simon Rodia constructing his famous towers. Saar would watch as Rodia sorted through piles of debris, selecting discarded objects to embed into cement over the towers’ steel frames. She once explained, “I think that was the beginning of me becoming an assemblagist or recycler.” Three decades later, Watts would again affect her artistic development. Observing other LA-based artists like John Outterbridge, Noah Purifoy, and John Scott recycle wreckage from the 1965 riots as material for assemblages, Saar realized the power artists had to transform negative events and objects into creative acts of resistance. .

Influenced by the Civil Rights movement, Saar began to utilize the medium of assemblage to express her commentary on America’s troubled race relations. She began collecting everyday objects that featured racist caricatures of African Americans that were found in homes throughout the United States. She collected Aunt Jemima, Uncle Tom, Little Black Sambo, and other stereotyped African-American figures from folk culture and advertising and incorporated them into collages and assemblages, transforming them into statements of political and social protest.

The Liberation of Aunt Jemima, by Betye Saar. 1972

In 1972, she created her first series of assemblages, The Liberation of Aunt Jemima. In one, a “mammy” figure stands on a field of cotton in front of a series of images of Aunt Jemima. In the center of her body is an image of another “mammy” standing in front of a picket fence and holding a white baby. As Saar explains, “the ‘mammy’ knew and stayed in her place… I attempted to change that ‘place’… [by turning] a negative, demeaning figure into a positive, empowered woman who stands confrontationally with one hand holding a broom and the other armed for battle. A warrior ready to combat servitude and racism.”

She returned to this notion of resisting racism and servitude in such subsequent series as Workers and Warriors and In Service.

Over the last three decades Saar’s work has focused on remembering the past, breaking down social stereotypes, countering the myriad forms of oppression, delving deeper into mysticism and ritual and synthesizing cross cultural symbols. In her own work she began using a larger, room-size scale, creating site-specific installations, including altar-like shrines exploring the relationship between technology and spirituality, and incorporating her interests in mysticism and Voodoo. Pairing computer chips with mystical amulets and charms, these monumental constructions suggested the need for an alliance of both systems of knowledge: the technical and the spiritual.

Betye Saar continues to live and work in Los Angeles. She has received numerous awards of distinction, including two National Endowment for the Arts Fellowships (1974, 1984), a J. Paul Getty Fund for the Visual Arts Fellowship (1990), a Flintridge Foundation Visual Artists Award (1998) and most recently, in 2013, The Museum of Contemporary Art, Los Angeles, presented her with the Distinguished Women in the Arts Award. In 1994, she and artist John Outterbridge represented the United States at the 22nd São Paulo Biennial in Brazil. In 2005, the University of Michigan Museum of Art organized the traveling exhibition Betye Saar: Extending the Frozen Moment, which examined the use of photographic fragments in her work. She has also been awarded honorary doctorate degrees by California College of Arts and Crafts, California Institute of the Arts, Massachusetts College of Art, Otis College of Art and Design, and San Francisco Art Institute.