The patent refers to pipe and valves and not the wall hanging type of extinguisher that is normally displayed. 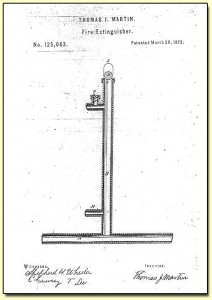 Martin’s fire extinguisher would wisely be attached to a reservoir of stored water and used to spray burning fires.

Below is a description of the invention from the awarded patent:

The nature of invention relates to the construction, arrangement and combination of suitable pipes and valves for conducting water from suitable reservoirs to buildings by means of stationary engines, for the purpose of preventing or extinguishing fires in dwellings, mills, factories, towns and cities and may also be used for warning, ventilating and washing buildings and for washing pavements and sprinkling streets.

Although British Captain George William Manby is credited with creating the modern style of the fire extinguisher in 1818, Martin’s improved version is often regarded as the first practical use of the machinery by some historians.

If you can find someone you can really talk to, it can help you grow in so many ways.