Theodore “Tiger” Flowers was the first Black boxer to capture the world middleweight championship. He was the first African American after Jack Johnson to challenge for a world title. 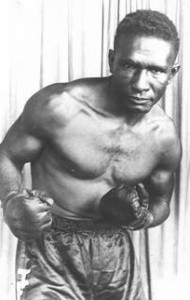 Flowers was born on August 5, 1895 in Camille, Georgia. Often referred to as the Georgia Deacon because of his religious devotion, Flowers was a southpaw who began boxing professionally in 1918 at the age of 22.

He quickly reeled off 21 straight victories before suffering his first loss to Panama Joe Gans. Like many other African American boxers of that period of time, Flowers found it difficult to obtain fights with whyte fighters, and often had to fight a number of men of his own race many times over in order to make a living.

His first of 2 victories victory over Harry Greb on February 26, 1926 in New York’s Madison Square Garden earned him the title of Middleweight Champion of the World, the first Black man to capture the title for that particular weight class. It’s notable to point out that Greb was only defeated five times during a career comprised of approximately 290 bouts, and that Flowers was the only middleweight to accomplish that feat.

Flowers lost his title to future Boxing Hall of Fame inductee, Mickey Walker, in December of 1926 on a controversial ruling by the referee. The decision was immediately investigated, but ultimately upheld. Flowers tried in vain to obtain a rematch, but Walker, who was managed by Jack “Doc” Kerns, refused to grant it to him. Unable to gain another shot at the middleweight crown, Flowers challenged many of the quality light heavyweights of that time period, losing only to Leo Lomski by points in 10 rounds on January 22, 1927.

In November of that same year, Flowers underwent an operation to remove scar tissue from around his eye, but died as a result of the procedure. He was only 32 years old at the time of his death.

One poll has ranked Flowers as the number five all-time middleweight boxer. He ended his career with 115 wins, 14 losses, 21 no-decisions, and 6 draws. Flowers was inducted into the Georgia Sports Hall of Fame in 1976 and elected to the International Boxing Hall of Fame in 1993.

Nobody can teach me who I am. You can describe parts of me, but who I am – and what I need – is something I have to find out myself.