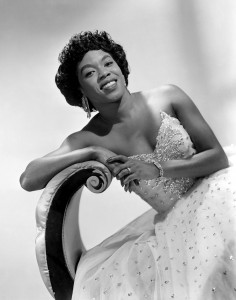 Born on March 27, 1924 in Newark, New Jersey, Sarah Louise Vaughan was an American jazz singer, described by Jazz commentator/music critic Scott Yanow as having “one of the most wondrous voices of the 20th century.

Sarah Vaughan’s parents were amateur musicians and they provided their daughter piano lessons as a child as well as a solid background in vocals, as a member of her mother’s church choir.

Vaughan’s first step toward becoming a professional singer was taken at a talent contest held at Harlem’s Apollo Theater, where many African-American music legends made their name. After being dared to enter, she won the 1942 competition with her rendition of “Body and Soul.” She also caught the attention of another vocalist, Billy Eckstine, who persuaded Earl Hines to hire Vaughan to sing with his orchestra.

By 1946 Sarah Vaughn was a solo artist who was rapidly becoming well known as one of the first jazz artists to use “bop” phrasing in her singing.

After the 1950s, shifting musical tastes meant that Vaughan no longer produced huge hits. However, she remained a popular performer, particularly when she sang live. In front of an audience, her emotional, vibrato-rich delivery, three-octave vocal range and captivating scat technique were even more appealing. Though her voice took on a deeper pitch as Vaughan got older—likely due in part her smoking habit—this didn’t impact the quality of her singing, as could be heard on “Send in the Clowns,” a staple in her repertoire.

She adopted a new style which allowed her to record numerous “pop” tunes that were commercially successful.  While her embrace of pop music scandalized jazz purists, it greatly widened Sarah’s fan base and demonstrated her business acumen, which many of her colleagues eventually grew to admire.

While Vaughan never gained the public renown of fellow performers such as Ella Fitzgerald or Billie Holliday, she is generally considered to have one of the greatest voices in the business and is credited with being a major force behind the popularity of “bop” music.  Some of her biggest hits include such classics as “Misty,” “My Funny Valentine,” and “Tenderly.” Her determination and ability to fit in (despite her natural shyness) with the mostly male dominated world of jazz music earned her the moniker “Sassy.”  Her flawless voice earned her the title “the Divine One;” but it was the breadth of her impact on the world of jazz and music in general that earned her multiple Grammy’s, including the 1989 Lifetime Achievement Award, as well as a place in the Jazz Hall of Fame.

Sarah Vaughan passed away in New York City at 66.

If you plant turnips you will not harvest grapes.