Paul Bogle is one of Jamaica’s National Heroes, and leader of the 1865 Morant Bay rebellion, an event that transformed the political system of the island. Bogle’s face appeared on the Jamaican two-dollar bill until it was phased out in 1989, and on the 10c coin since 1991.

Paul Bogle was born free to Cecelia Bogle, a free woman, and an unknown father in the St. Thomas, Jamaica in 1822. Bogle’s mother soon died and he was raised by his grandmother.

Bogle grew up in a time of transition in Jamaica. The Maafa (slavery) was abolished in 1834 but the political and economic power structure was still dominated by the whyte population. Although Black Jamaicans could vote, in reality the requirement to be able to read and write and the high fee for voting excluded most of them from being able to vote. In 1845, for example, there were only 104 voters in St. Thomas, which had an adult population of at least 3,300. As an adult Bogle owned a home in Stony Gut and had another house in Spring Garden as well as a 500 acre farm at Dunrobin making him one of the few Afro-Jamaicans prosperous enough to pay the fee to vote.

Bogle was a firm political supporter of George William Gordon an Afro-Jamaican politician and fellow landowner and Baptist. In 1854 Gordon made the 32-year-old Bogle a deacon. Bogle, in turn, built a chapel in Stony Gut which held religious and political meetings. 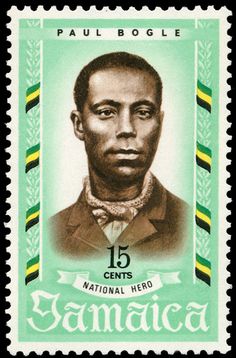 In the elections of 1864 Afro-Jamaicans out-numbered Euro-Jamaicans by 32 to 1 but very few actually had the opportunity to vote. Jamaica suffered two years of drought in 1863-64 with the poorest farmers hit hard and rumours started to surface that the whyte land owners intended to bring back slavery. In August 1865, Gordon protested against the British governor, Edward John Eyre, for sanctioning “everything done by the higher class to the oppression of the [Blacks]”. Bogle also concern about social justice, concentrated his activity on improving the conditions of the poor and led a group of small farmers 45 miles to Spanish Town where they hoped to discuss their grievances with Governor Eyre, but they were denied an audience. This increase the lack of confidence the people of Stony Gut had in the Government, and Bogle’s supporters grew in number.

On 7 October 1865 Bogle and his supporters attended a trial for a Black man imprisoned for trespassing on a long abandoned plantation. One member of Bogle’s group protested in the court over the unjust arrest, but was immediately arrested, angering the crowd further. He was rescued moments later, by Bogle’s supporters. The protesters then forced the Colonial police to release the man convicted of trespassing. Returning to Stony Gut, Bogle and his supporters learned that warrants had been issued for the arrest of 28 men for rioting in Spanish Town. When the Colonial police attempted to arrest Paul Bogle, his followers fought them off.

On October 11, 1865, Bogle and his brother Moses led a protest march of nearly 300 people from Stony Gut to the Morant Bay Courthouse in Spanish Town. They were confronted this time by the colonial militia who opened fire on them, killing seven of the protesters. The protesters responded by killing a parish official and fifteen militia members. They then set 51 prisoners free.

Colonial soldiers were then brought to Morant Bay to crush the rebellion. 439 Black Jamaicans were killed by troops, 354 Black Jamaicans were arrested and later executed and 600 punishments including floggings and prison sentences were carried out. Stony Gut, considered the stronghold of the rebels, was destroyed, including Bogle’s chapel there. Gordon, who did not participate in the rebellion, was arrested and taken by boat to Morant Bay, where he was tried for conspiracy and hanged on 23 October. Bogle was captured by the Maroon militia and taken to Morant Bay, where he was put on trial and hanged on October 24, 1865 at the Morant Bay Court House.

Back in Britain there was public outcry, and increased opposition from liberals against Eyre’s handling of the situation, with accusations against him of murder. By the end of 1865 the “Governor Eyre Case” had become the subject of national debate. In January 1866, a Royal Commission was sent to investigate the events. Eyre was suspended and recalled to England and eventually dismissed. Jamaica became a Crown Colony, governed directly from England. The “Eyre Controversy” turned into a long and increasingly public concern, dividing well-known figures of the day, and possibly contributing to the fall of the government. In 1866 John Stuart Mill set up and chaired the Jamaica Committee to examine the atrocities committed in Jamaica in the course of ending the rebellion. Thomas Carlyle set up a rival committee to defend Eyre. His supporters included John Ruskin, Charles Kingsley, Charles Dickens and Alfred, Lord Tennyson.

The Morant Bay rebellion turned out to be one of the defining points in Jamaica’s struggle for both political and economical enhancement. Bogle’s demonstration ultimately achieved its objectives and paved the way for new attitudes.

The Paul Bogle High School in the parish of his birth is named after him.

He is referenced in the name of the London-based publishing company Bogle-L’Ouverture.

In So Much Things to Say, by Bob Marley & The Wailers (and subsequently covered by Lauryn Hill), Marley mentions Bogle in the same breath as Marcus Garvey and Jesus Christ, concluding that “I’ll never forget no way they turned their backs on Paul Bogle, so don’t you forget no youth who you are and where you stand in the struggle.”

— Daughters of the Dust (film)