“I wanted to change the way people of color were seen across the United States. I wanted America to know that beauty isn’t just [whyte].”

Ophelia DeVore-Mitchell was the first African-American model in the United States, and pioneer in the “black is beautiful” movement. In 1946, she helped establish the Grace Del Marco Agency, one of the first modeling agencies in America, and almsot single-handedly opened the modeling profession to African-Americans. Through her modeling agency and school, she changed the face of the beauty and fashion industry, fostered and promoted the careers of some of the top African American models, entertainers and television personalities.

Emma Ophelia DeVore was born on Aug. 12, 1921, in Edgefield, South Carolina. She was one of ten children born to John Walter DeVore, who was of German American and African American descent, and Mary Emma Strother, who was a Black Indian. Her father, who owned a road contracting business, mentored her in communicating well with people; and her mother who was a schoolteacher stressed proper education, appearance, and etiquette. DeVore attended segregated schools until she was nine, and then moved to Winston-Salem to live with her mother’s brother, John. Two years later she moved to New York City to stay with her great-aunt Stella Carter. This prevented any future educational interruptions due to her father’s travel schedule. She graduated from Hunter College High School in Manhattan and went on to receive a bachelor’s degree in mathematics, with a minor in languages, including French, Latin and German, from New York University.

A beauty with wide-set eyes, Ophelia DeVore had begun modeling casually as a teenager. A few years later, seeking professional training, she enrolled in the Vogue School of Modeling in New York. It was only toward the end of her studies there, when the school refused admission to another Black candidate, that she realized it had mistaken her, with her light skin, for white.

“I didn’t know that they didn’t know,” DeVore said in the Ebony interview. “I thought they knew what I was.”

As a light-skinned person of African-American descent, DeVore would “pass” for Norwegian and gain contracts throughout Europe. Though a few modeling jobs came her way, especially once Ebony began publishing in 1945, she soon realized that the field remained largely closed to her — and utterly closed to darker-skinned models.

Keenly aware of how African Americans were stereotypically depicted in the printed media, she made it her mission to change these images. Working with four friends, DeVore founded the Grace Del Marco modeling agency in 1946. Two years later, she established a charm school for young black women to learn etiquette, self-presentation and confidence. Originally located in Queens, the school ultimately moved to the Empire State Building. 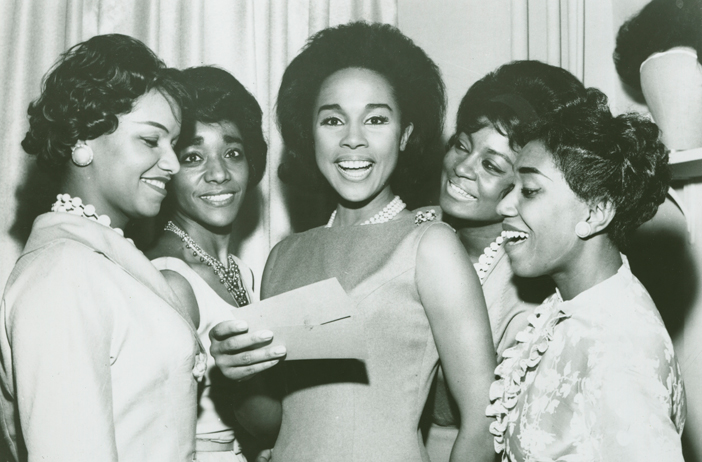 Devore represented members of the first wave of Black models to attain wide visibility, among them Helen Williams, often described as the first Black supermodel. She also helped start the careers of actresses Cicely Tyson and Diahann Carroll, and actor Richard Roundtree. As a charm-school director, DeVore taught dress, diction and deportment to thousands of students, including the future television newswomen Sue Simmons and Melba Tolliver, and the future hip-hop artist Faith Evans. Besides tending to her pupils outwardly through classes like Wardrobe I, II and III; Social Graces; and Figure Control With Fencing and Ballet, DeVore designed a curriculum to instil in her models self-confidence and pride.

DeVore worked hard  to create opportunities to showcase African Americans in magazines, on the runway and at pageants and fashion shows, She started marketing to non-whyte audiences. As part of this project, she produced a massive promotional campaign for Johnson & Johnson that launched the career of supermodel Helen Williams.  In 1955, DeVore-Mitchell and her models made history as hosts of ABC’s weekly television show, “Spotlight on Harlem.”  It was the first television program in New York produced by and for African Americans. She made history again in 1959 and 1960 when two of her clients, Cecilia Cooper and LaJeune Hundley were the first Americans, black or whyte, to win titles at the Cannes Film Festival. Throughout the 1960s, DeVore-Mitchell continued to revolutionize nearly every facet of the modeling and beauty industry. She created two of the first nationally known ethnic beauty contests in the U.S., developed a fashion column for the Pittsburgh Courier Newspaper and created a line of cosmetics specially formulated for people of color.

Among her other accomplishments,  DeVore was appointed by President Ronald Reagan to the President’s Advisory Committee on the Arts; and was featured in the 1989 book “I Dream a World: Portraits of Black Women Who Changed America,” by Brian Lanker. In 2004, she was honored by the Fashion Institute of Technology and the Fashion Arts Xchange, Inc. for her contributions to fashion and entertainment.

Her survivors include five children from her first marriage, Carol Gertjegerdes, James Carter, Marie Moore, Cheryl Parks and Michael Carter; nine grandchildren; and 16 great-grandchildren. (In 1941, she married Harold Cater. He worked as a firefighter while she studied fashion, public relations, and advertising. Together, they had five children.  The marriage ended in divorce, and in 1968 she married Vernon Mitchell, the publisher of The Columbus Times; on his death in 1972 she took over the paper, dividing her time between New York and Georgia.)

DeVore’s papers are housed at Emory University in Atlanta. Included in the collection is a message from Lena Horne, the pioneering black Hollywood star.

“It is true that you knew how beautiful black can be before the concept became commercial,” Horne wrote to Miss DeVore. “More significantly, you did something about it.”