“I have walked that long road to freedom. I have tried not to falter; I have made missteps along the way. But I have discovered the secret that after climbing a great hill, one only finds that there are many more hills to climb. I have taken a moment here to rest, to steal a view of the glorious vista that surrounds me, to look back on the distance I have come. But I can rest only for a moment, for with freedom comes responsibilities, and I dare not linger, for my long walk is not yet ended.” ~Nelson Mandela

Nelson Mandela became the first Black president of South Africa in 1994, serving until 1999. He won the Nobel Peace Prize in 1993. 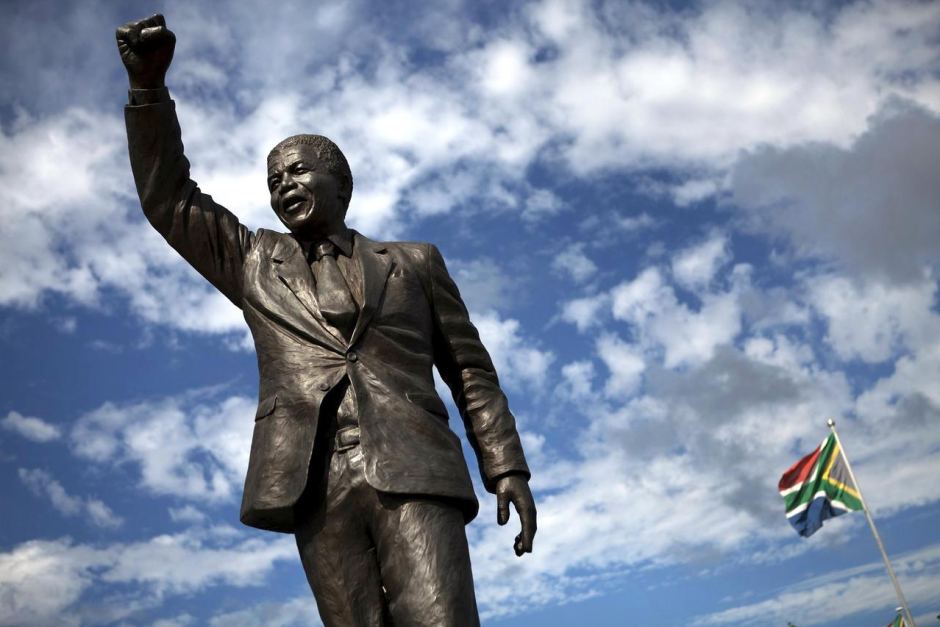 Nelson Mandela was born Rolihlahla Mandela on July 18, 1918, in the tiny village of Mvezo, on the banks of the Mbashe River in Transkei, South Africa. “Rolihlahla” in the Xhosa language literally means “pulling the branch of a tree,” but more commonly translates as “troublemaker.”

Mandela was the son of one of South Africa’s leading dignitaries, Henry Mandela of the Tembu nation. As as a young law student he became involved in political opposition to the whyte minority regime. Joining the African National Congress (ANC) in 1942, he co-founded its more dynamic Youth League two years later.

Initially committed to non-violent mass struggle and acquitted in the marathon Treason Trial of 1956-1961, Mandela and his colleagues accepted the case for armed action after the shooting of unarmed protesters at Sharpeville in March 1960 and the banning of anti-apartheid groups.

In 1961, he became the commander of the ANC’s armed wing, Umkhonto we Sizwe. In August of the following year, he was arrested and jailed for five years. In June 1964, he was sentenced again, this time to life imprisonment, for his involvement in planning armed action.

He spent 27 years in prison. He was first imprisoned at the infamous Robben Island Prison, a maximum security facility on a small island off the coast of Cape Town. In April 1984, he was transferred to Pollsmoor Prison in Cape Town and in December 1988 he was moved to the Victor Verster Prison near Paarl from where he was eventually released.

During his incarceration Mandela taught himself to speak Afrikaans and learned about Afrikaner history. He was able to converse with his guards in their own language, using his charm and intelligence to reason with them and try to understand the way they thought. This caused the authorities to replace the guards around regularly Mandela as it was felt that they were becoming too lenient in their treatment of their famous prisoner.

While in prison, Mandela became a national and international cultural symbol of freedom and equality. He rejected offers made by his jailers for remission of sentence in exchange for accepting the Bantustan policy by recognising the independence of the Transkei region and agreeing to settle there.

Mandela remained in prison until February 1990, when sustained ANC campaigning and international pressure led to his release. On 2 February 1990, South African President F.W. de Klerk lifted the ban on the ANC and other anti-apartheid organisations. Mandela was released from Victor Verster Prison on 11 February 1990.

After his release, Mandela returned to the leadership of the ANC and, between 1990 and 1994, led the party in the multi-party negotiations that resulted in the country’s first multi-racial elections. In 1994, Mandela was inaugurated as South Africa’s first Black president. He presided over the transition from minority rule and apartheid, and was awarded the Nobel Peace Prize for his peaceful effort in dismantling the country’s apartheid system.

Following his retirement as president in 1999, Mandela went on to become an advocate for a variety of social and human-rights organisations. He used his status as a respected elder statesman to give weight to pertinent issues, declaring the United States “a threat to world peace” in 2002 while calling on then president George W Bush not to launch attacks on Iraq.

Because his health was declining, Mandela chose to retire from public life in 2004 and went on to reduce his number of appearances.

In 2009, Mandela’s birthday (July 18) was declared “Mandela Day” to promote global peace and celebrate the South African leader’s legacy. Mandela spent more time in hospital towards the end of 2012, suffering from a lung infection and gallstones. He was discharged a few days before New Year and started 2013 at home surrounded by his family.

He passed away on 5 December 2013 of a lung infection at his home in Johannesburg. He was 95 years old.

He was survived by his wife, Graca Machel, who he married on his 80th birthday.

Mandela has been married three times, including a 38-year marriage to politician Winnie Madikizela, who was his second wife. They wed in 1958 and had daughter Zenani the same year. Their second daughter Zindzi was born in 1960. His youngest daughter was just 18 months old when he was sent to prison.
Nelson and Winnie separated in 1992 and divorced in 1996.

His first marriage to Evelyn Mase had also ended in divorce in 1957 due to his devotion to revolutionary agitation. They had been together for 13 years and had four children together including Thembi, who was born in 1946. He died in a car crash in 1969 at the age of 23 and Mandela was not allowed to go to the funeral as he was in jail. Their first daughter Maki, who was born in 1947, died at just nine months old and the couple named their second daughter in 1953 in her honour. Makgatho was born in 1950.

Nelson Mandela is remembered as the Greatest Political Leader of the 20th Century.