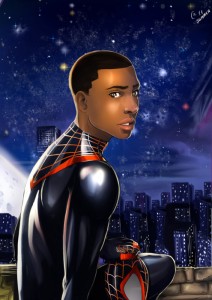 Miles Morales is a fictional comic book superhero who appears in books published by Marvel Comics, in particular the monthly series Ultimate Comics: Spider-Man. The character was created by writer Brian Michael Bendis and artist Sara Pichelli, with Bendis and Marvel editor-in-chief Axel Alonso drawing inspiration from both U.S. President Barack Obama and American actor Donald Glover. He is the second Spider-Man in the Ultimate Marvel continuity.

Miles Morales first appeared in Ultimate Fallout #4 (August 2011), following the death of Peter Parker. A teenager of Black Hispanic descent, Miles is the son of Puerto Rican born Rio Morales and African American Jefferson Davis. Mile’s life changed when his uncle broke into Oscorp to steal the formula which created Spider-Man and in the process an experimental spider crawled into his bag. Miles who had always been close to his wayward uncle visits him after the heist. Miles as luck would have it gets bitten by the spider and gains powers similar to Peter Parker.

Miles has the proportional strength of a spider, allowing him to lift things many times his weight and height class. He can stun or paralyze an opponent by touching them; it has the same effect as a spider bite. When in a dangerous situation his mind will tingle allowing him to react to the situation before hand (“Spidey sense”). Miles and whatever is in contact with him can blend into his surroundings allowing him to sneak up on enemies or flee. Miles body is far more resistant to physical harm than that of a typical human allowing him to withstand blows, falls etc. that would kill a normal human.

Don’t be so much in love that you can’t tell when the rain comes.