“We now come to the harbour of Keelwa; from this port a very considerable trade carried on with Zanzibar other parts, in Ivory, Gum Copal and other native produce; it is besides the principal place from which slaves are exported.”
~From a report by the Commander of the HMS Gorgon of 1862.

The last place on earth where human beings were reduced to mere commodities, and bought and sold nearly half a century after the practice was banned in the rest of the world was in Zanzibar (Tanzania), East Africa. Captives were taken from a vast area, extending south of Lake Nyasa (now Malawi) west of LakeTanganyika (now DR Congo) and north of LakeVictoria (now Uganda), to the Stone Town open slave markets. The captives were first imprisoned in underground chambers and if they lived for more then three days, they would then be brought to market. The markets, presided over by Arab traders, opened around four in the afternoon. Accounts mention that the captives were led outside and lined up in rows according to age or gender, suitability for employments or perceived value. Buyers made detailed inspections of eyes and teeth, whilst intrusive examinations were carried out on women. They were tied to a tree and whipped with a stinging branch to demonstrate their strength for potential buyers. Those who did not cry or faint fetched a higher price at market. 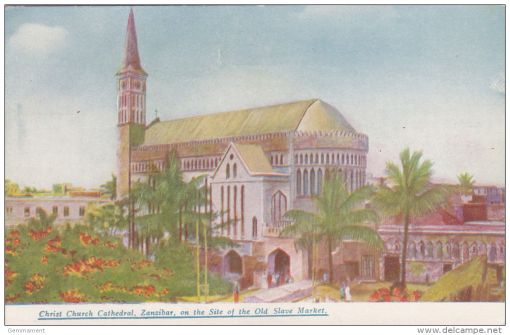 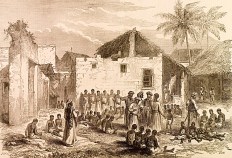 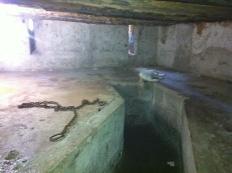 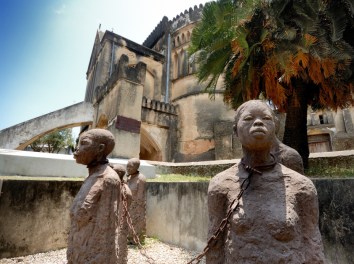 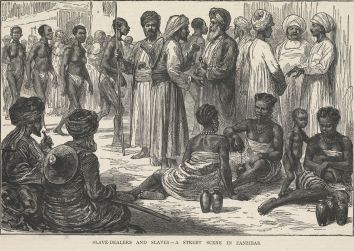 Under pressure from the British government, the Zanzibari sultan closed the last slave market in Africa in 1873. In 1879, British missionaries built Christ Church Cathedral at the site of the infamous market. Known as the ‘Slave Market Church’, it was purposely built atop the former slave market as a monument to the triumph of faith over human suffering. Beneath the church are the underground chambers where captives were once held before being sold. On the side of the church is a memorial to the women and children that didn’t survive the ordeal. The cathedral’s high altar is said to be positioned over the spot of the whipping tree where captives were lashed. 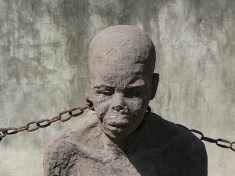 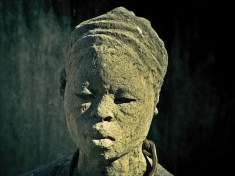 Outside in the cathedral’s garden is a monument by swedish artist Clara Sornas. “Memory for the Slaves” by Clara Sörnäs, concrete, May 2, 1998, depicts five [enslaved] people, slightly larger than life, standing in a pit below ground level. “The poignant figures emerge from the rock hewn rock and thus appear hopelessly trapped, shoulders slumped in despair. Around their necks they wear metal collars from which a chain binds them. Its a disturbing and haunting sight.”

The bird that flaps its wings too much will lose its feathers. (Generosity without limit will exhaust one’s resources.)