Black teacher and journalist, Mary Ann Shadd, was the first Black woman in North America to publish a newspaper and the first woman to study for a law degree at an American university. 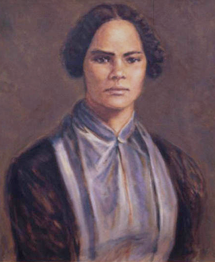 Born October 9, 1823 to free parents in Wilmington, Delaware, Mary Ann Shadd was the eldest of 13 children. Her father worked for the abolitionist newspaper called the Liberator run by abolitionist William Lloyd Garrison and provided help to fugitive African Americans as a member of the Underground Railroad. Shadd Cary would grow up to follow in her father’s footsteps. Shadd was educated at a Quaker school in Pennsylvania, and she later started her own school for African Americans. After the passage of the Fugitive Slave Law, she went to Canada with one of her brothers. Not long after, the entire Shadd family moved there.

Shadd settled in Windsor, Ontario where she wrote educational booklets outlining the advantages of Canada for settlers willing to work and the need for living within one’s means. She set up a school in Windsor for fugitives from the Maafa (slavery). She encouraged everyone to attend including whyte Canadian children, but many of their parents refused. She moved to St. Catharines and then Toronto, where she met and married widower Thomas Cary. To promote information about the successes of Black people living in Canada, and to speak out against the Maafashe began the Provincial Freeman newspaper, becoming the first Black woman in North America to publish a newspaper, although at first she had to have a man stand in for her as the apparent publisher.

Prior to returning to the US, Shadd obtained Canadian citizenship. In 1851, she was the only woman to attend the First Convention of Colored Freemen held outside of the US. Then she worked as a recruitment agent to support the Union side during the American Civil War. Shadd moved to Washington, DC, where she taught, then pursued law studies and became the first Black woman to complete this degree at Howard University. Shadd fought for many causes, including women’s right to vote. In addition Shadd testified before the Judiciary Committee of the House of Representatives along with women’s rights activists Elizabeth Cady Stanton and Susan B. Anthony. Shadd succeeded in achieving another first when she became the first Black women to cast a vote in a national election

— Octavia Butler, Parable of the Talents