Kathleen Deanna Battle is one of the most famous African-American sopranos. Battle, who is considered to be among the finest coloratura sopranos of her time has become renowned for her interpretations of the light lyric repertoire, especially the soubrette roles of Mozart and Richard Strauss, and for her recitals of German Lieder and Black spirituals. Battle is arguably the only lyric soprano with the ability to bridge the gap between the European bel canto opera and the African-American tradition of vocal improvisation. 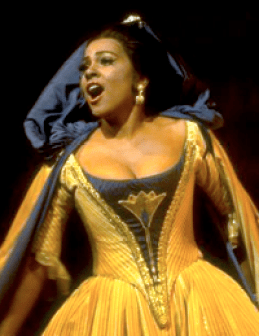 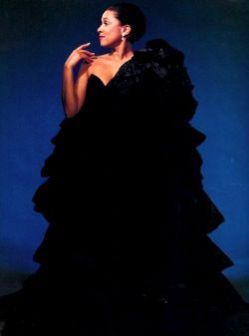 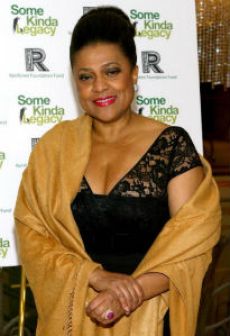 Battle was born in Portsmouth, Ohio, USA, on August 13, 1948, the youngest of seven children. Her father was a steelworker, and her mother was an active participant in the gospel music of the family’s African Methodist Episcopal church. Battle attended Portsmouth High School where her music teacher and mentor was Charles P. (Phil) Varney.

In a Time Magazine interview with music critic Michael Walsh, he recalled first hearing the eight-year-old Battle sing, describing her as “this tiny little thing singing so beautifully… I went to her later and told her God had blessed her, and she must always sing.” In that same interview, Walsh described Battle as “the best lyric coloratura in the world”.

Battle was awarded a scholarship to the University of Cincinnati College-Conservatory of Music where she studied voice with Franklin Bens and also worked with Italo Tajo. She majored in music education rather than performance in undergraduate school and went on to get a master’s degree in Music Education as well. Even though she was encouraged to seek a vocal career, in 1971, she took a teaching position at a Cincinnati inner-city public school. She taught music to students aged 10 through 12 and thus fulfilled one of her desires: to share her knowledge with Black children. While teaching she continued to study voice privately. She later studied singing with Daniel Ferro in New York.

In 1972, her second year as a teacher, a friend and fellow church choir member phoned her and informed her that the conductor Thomas Schippers was holding auditions in Cincinnati. At her audition Schippers engaged her to sing as the soprano soloist in Brahms’ German Requiem at the 1972 Festival dei Due Mondi in Spoleto, Italy. Her performance there on July 9, 1972 marked the beginning of her professional career.

Battle made her stage debut in Rossini’s Il barbiere di Siviglia as Rosina with the Michigan Opera Theater in Detroit in 1975. Susanna in Mozart’s Le nozze di Figaro was her New York City Opera debut role in 1976. During this time, she also sang orchestral concerts in New York, Los Angeles, and Cleveland. James Levine brought her to the Metropolitan Opera in New York as the Shepherd in Wagner’s Tannhäuser in 1978, and she appeared frequently at the Met in important roles until 1994. She first appeared in Europe in 1978 at the Italian Spoleto Festival, and in 1979 debuted at the Glyndebourne Festival.

Her first appearance at Salzburg was in 1982 at an all-Mozart concert, and she often returned in concert, recital and opera. Her important opera roles at Salzburg were Susanna, Zerlina, and Despina, three Mozart roles with which she has been associated at many opera houses around the world. She has appeared at most of the major opera houses of the world including San Francisco, Chicago, Covent Garden, London, Geneva, Vienna, and Berlin. In 1985, she was the soprano soloist in Mozart’s Coronation Mass at St. Peter’s Cathedral at the Vatican, in a performance conducted by Herbert von Karajan. She sang Handel’s Semele in a highly acclaimed performance in 1985 at Carnegie Hall and later recorded the role. In 1990 she was joined by Jessye Norman for a concert of spirituals which was conducted by James Levine at Carnegie Hall. Although best known for roles in the operas of Mozart and Strauss (Zdenka, Sophie and Zerbinetta), Battle has also had great success in Massenet’s Werther, Donizetti’s L’elisir d’amore, Don Pasquale, and La fille du regiment, Verdi’s Un ballo in maschera and Falstaff and Rossini’s Il barbiere di Siviglia and L’Italiana in Algeri. Battle has maintained an active recital career, and her Schubert interpretations are very fine. Her recital programs have also featured songs by Mozart, Strauss, Fauré and Rodrigo.

Kathleen Battle’s voice is a high, very pure soprano with great charm. She has excellent technical control, which has allowed her to sing the difficult coloratura roles of Rosina and Zerbinetta though her approach is always more lyric that that of most coloratura sopranos. She has made performances and recordings in a variety of styles and genres, including classical sacred music, spirituals and traditional jazz. Battle is arguably the only lyric soprano with the ability to bridge the gap between the European bel canto opera and the African-American tradition of vocal improvisation. She is also an excellent actress and tries to give full characterization to each of her roles. Several of her best roles were televised live from the Metropolitan Opera, New York and later released on video.

Battle is a five-time Grammy award winner.  She also won an Emmy Award in 1991. She received the Laurence Olivier Award for Best Performance in a New Opera Production for her debut performance at the Covent Garden Royal Opera House, London. Battle is the recipient of several honorary doctorates from universities. She was inducted in the NAACP Image Hall Of Fame in 1999.

Battle has continued to appear in concert and recital and remains a favorite of the public.