‎”A lot of people have this idea that the only parts of Afrika where there is any evidence of high civilization was ancient Egypt. My book shows that the evidence is all over Afrika. But no one has put all the stuff in one place before. That’s what I’m doing that’s brand new. I don’t think anyone has done this before.” – Robin Walker

Kentake Page is proud to present this exclusive interview with the Black History Man himself, Robin Walker. Walker is the author of When We Ruled, his richly illustrated, detailed and thoroughly researched tome on Afrikan history.

Since 1992 and up to the present period, Robin Walker has lectured in adult education, taught university short courses, and chaired conferences in African World Studies, Egyptology and Black History. He continues to teach throughout the U.K. and abroad and his current book is a collaborative effort with Siaf Millar and Saran Keita called Everyday life in an Early West African Empire.

Robin Walker was born in 1967 in London, England. Part of his childhood was spent in Jamaica where he did a couple of years of primary school. The rest of his schooling was done in London, in Milton Keynes and in Kettering England. He attended the London School of Economics and Political Science between 1987 and 1990 and earned a degree in economics.

As a young man Walker had the same predominant thoughts about Afrikan and Black history as the rest of the population. He explained:

The beginning of Walker’s journey as a historian and scholar came when he saw and read the classic The Destruction of Black Civilization by Chancellor Williams:

“I moved into a household where somebody had Chancellor Williams’ The Destruction of Black Civilization. I promised myself that when I finish university that I would read it. I read it twice in 1990 and as I said the next move was meeting Femi Biko and as they say, the rest is history.”

Dr. Femi Biko is one of the most important and brilliant scholars in the U.K. In 1990, Walker began studying Black Studies under his tutelage and was influenced by Biko to become an adult education instructor specializing in teaching Black studies.

“It was 1990, a young lady I was going out with, she saw an advert for his course, went to one of the sessions and suggested that I should come along. Having met the great man, he was the one that put me on the path that I’ve been on ever since.”

Since that time Walker has engaged in the long and hard work of researching the history of the black man and woman.

“Studying with Femi Biko… He had a very extensive reading list. So, I went on a major book buying spree to buy the books that he was talking about and the result was I became familiar with names like Cheikh Anta Diop, John G. Jackson, Yusef ben-Jochanan, Ivan Van Sertima, Runoko Rashidi… I started buying up these peoples books and reading them. I didn’t do any traveling at the time. Obviously, there was the British Museum which is in London; that was a good source because it’s got a lot of stolen artifacts from Africa and elsewhere. Some of the other London museums have got that kind of stuff. My traveling came much, much later.”

His first major work came in 1999 with the book Classical Splendour: Roots of Black History. The book covers an enormous amount of history from Afrika’s ancient and medieval periods including Ancient Egypt, Ancient Nubia, Carthage, Numidia and the empires of ancient Ghana, Mali and Songhai, the Hausa, Nok, Igbo, Yoruba and Benin. All this information is given in brief form rendering it accessible to the lay reader.

The making of Classical Splendour: Roots of Black History led to Walker’s next major and arguably most important work: When We Ruled, published in 2006, is a 700 page masterwork of history.

“Having written Classical Splendour: Roots of Black History, I noticed that most people didn’t take that book remotely seriously. So I decided to take a different approach. Why not write a book and put in everything I know? That’s what When We Ruled is.”

The book took seven years to write and Walker was assisted by several individuals who contributed funds out of pocket to bring this work to fruition.

“I wanted to make sure that every theme in When We Ruled was the most detailed that it could be. I went on a major book buying spree just to write When We Ruled.

The first thing obviously, was the Afrikan origin of the human race, so I bought books specifically on that. The second theme would be the Kingdom of Ta Seti, Ancient Nubia. I bought something just on that. Then the three chapters of ancient Egyptian history, Old Kingdom, Middle Kingdom and New Kingdom, I bought specific books just to cover those topics. The next thing would be Kerma and then late period Kush. I bought books just to cover those themes. Then the next thing after would be Carthage and Numidia, I bought books just on that to make sure that I had a very detailed bunch of sources to base the information on. Then in writing the history, I didn’t want to just tell a chronological story… this happened and then this happened… I wanted to make sure that people got a sense of what it was like to live in these civilizations. What were the cities like? What kind of things would you see? What buildings were there? What temples were there? What were people buying and selling? What trading links fed these cities? And the most important question that people want to know is if these Black civilizations existed, how come they don’t exist today? What happened? I wanted to make sure that all those questions were answered and made sure that I kept a very detailed story… I also made sure the book was as well illustrated as it could possibly be. I wanted to write an African history book which for the first time was in full colour. So I went on, again, a major spree in buying photographs, contacting photographic agencies.”

The thoroughly researched When We Ruled presents a compelling and historically sound narrative of Afrikan history dispelling the a long held notion by many including Chancellor Williams in the Destruction of Black Civilization that all the evidence of Black people’s history was destroyed by European and Arab Slave traders.

“No they didn’t. The palaces from medieval and ancient times are still standing. Some of them are in ruins, but they’re still there. That’s true of temples, that’s true of churches, that’s true of mosques, that’s true of houses. That’s also true of fine arts, that’s also true of manuscripts. So what I wanted to do was to show people this and therefore completely change the tone of Black history. A lot of people have this idea that the only parts of Afrika where there is any evidence of high civilization was ancient Egypt. My book shows that the evidence is all over Afrika. But no one has put all the stuff in one place before. That’s what I’m doing that’s brand new. I don’t think anyone has done this before.”

Even with such well documented work, there remains a stubborn attitude in Black communities across the Diaspora that we need to “forget the past and move on from slavery”. Walker addressed that attitude in the following way:

If we are looking at the bigger question: what did Black people do to Africanize the world? Well, the answer is actually quite a lot. When you put that “quite a lot” into perspective, then the 500 years of slave history that everyone is talking about is actually a miniscule part of that story.”

Some may still argue as to the importance or relevance of history in the lives of common Black people who are struggling with daily challenges of life. To that, Walker said:

“We are still shaped by ancient ideas, ancient concepts and they are still of value and they are still relative. Some people will say, ‘It’s just about money. Robin, we need to be making money right now.’ You look into our history and you find that the richest person in the whole of human history is Mansa Musa. They estimate that he had the equivalent of 249 billion £ or 400 billion U.S. He made this kind of money between 1312 and 1337. They also estimate that his fortune was three times bigger than Bill Gates’ fortune. Now I believe information like this is sobering because it puts things into a context. Who would have thought that an African chief in the 14th century had achieved this. And that’s not the only surprise. As I’ve researched Afrikan history, I’ve found many examples of Afrikan Kingdoms that had glass windows. I’ve found many examples of Afrikan kingdoms that had internal toilettes. One example, of an Afrikan kingdom where the royal palace has ruins of a swimming pool. These are examples in every single case I can verify this, in every single case I can prove it.” 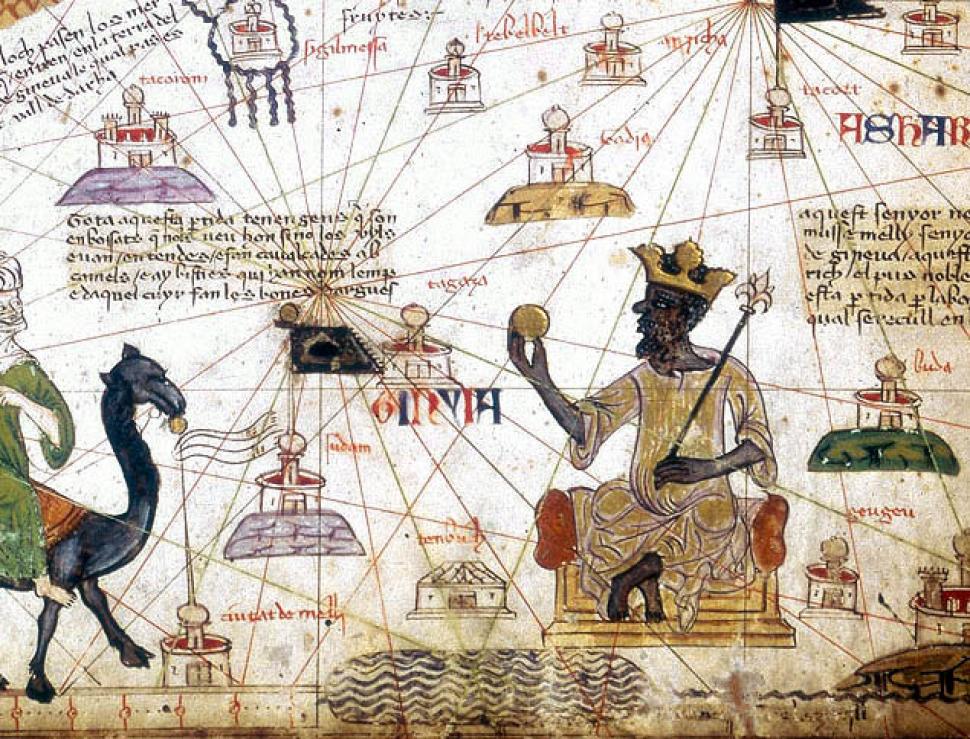 He also addressed the skeptics and debunkers who seem to only trust white or European sources and attack Black scholarship and offered advice to future historians:

Robin Walker continues to educate Black people through his adult education programs. His commitment to empowering our people through knowledge and economic development is evident in his colleagues and students such as the publisher of Pomegranate Publishing and K.N. Chimbiri who has written several children books including Secrets of the Afro Comb, and children’s books on Black history, Ancient Egypt’s Old Kingdom and Kush.

“Originally I had a 12 week course which was history and religion. I’ve since expanded it into a level 1, a level 2, a level 3 course where people learn bits of history, bits of politics, sociology, psychology… Black people’s contributions to art, music, sciences and the most important one, Black economics so that they can apply what’s being taught to actually better their situation. Those courses, I’m still doing them now, they are still popular, I think it’s the most important legacy that I’ve so far left behind.”

Look for more of Kentake Page’s exclusive interview with Robin Walker where he will share more on the importance of Black adult education versus youth education, Black economics and more advice to future historians!

I believe that love expands. As you give love out, it’s received and reciprocated—and it grows. That’s the beauty of it.