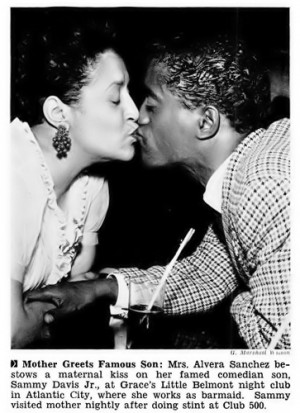 During his lifetime, Davis Jr. stated that his mother was Puerto Rican and born in San Juan. However, the 2003 biography In Black and White claims that Davis Jr. claimed he was Puerto Rican because he didn’t want to have to deal with a backlash for being Cuban during a time when anti-Cuban sentiments were high and could affect his career. The book claims that Sanchez was in fact born in, Harlem, New York, the daughter of Cuban Americans Marco Sanchez, a cigar salesman, and Luisa Aguiar (who died in 1996, at the age of 112), information which was obtained from the daughter and granddaughter of Sanchez’s sister Julia and from contemporary documentation.

Sanchez began her career as a chorus-line dancer at the Lafayette Theater in Harlem, in 1921, where she became known as Baby Sanchez. In 1923, performing in a touring show called Holiday in Dixie, she met and married Sammy Davis Sr., also a dancer in the show. Their son, and only child, Sammy Davis Jr., was born in 1925. Davis Jr. often traveled with his touring parents as a child, and made his stage debut at 3, the same age, his parents separated. His father obtained sole custody of him, taking him on the road. Davis Jr. became a tap-dance prodigy by the age of 10, trained by his father. But he was Baby Sanchez’s son, when he first appeared at the Apollo Theater. Sanchez had been a chorus-line dancer at Apollo Theater for six years and appeared in Carl Micheaux’s 1936 Swing. She decided to retire when the Apollo disbanded its dance chorus, though she danced informally into her 90’s.

After retiring from the stage, she moved to Atlantic City, where she worked at the Club Harlem and Gracie’s Little Belmonte as a barmaid. Sanchez became something of a house celebrity at Gracie’s Little Belmonte, a popular bar on Kentucky Avenue, a street of glittering black clubs in Atlantic City. Telling jokes and carrying a special gold napkin, Ms. Davis was often visited at her station by star performers like Count Basie when they finished their acts.

Sanchz contined to be involved with New York tap dance until her death, serving from 1989 as an adviser to the New York Committee to Celebrate National Tap Dance Day. Sanchez was survived by her daughter, Ramona. Her celebrated son died in 1990, at the age of 64.

If you believe you are to blame for everything that goes wrong, you will have to stay until you fix it.